Users are reporting excessive battery drain after updating to Apple's latest iOS 15.4 update, claiming that their iPhones are no longer lasting as long as they used to before downloading and installing the newest iOS version. 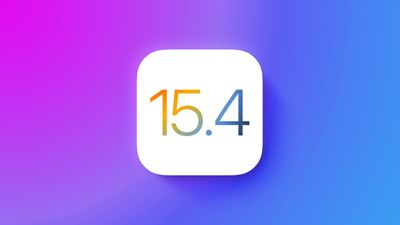 Users have taken to Twitter to voice their poor battery life experience on iOS 15.4, tagging the Apple Support account in hopes of finding a solution. "What's wrong with the iPhone battery after iOS 15.4 update?" one user tweeted to Apple Support, adding "It used to last 1.5 days with significant usage and now it’s less than 20 hours."

Frustrated customers have also taken to the Apple Support forums, an online community where users share issues and find solutions from the Apple Support community. Several posts on the forum reveal users are displeased with the battery life experience on iOS 15.4. One user wrote "with the update to iOS 15.4, I experience a "massive" battery drain on my ‌iPhone‌ 8. That means the battery of my ‌iPhone‌ 8 is empty within a few hours. With iOS 15.4, I have to recharge my ‌iPhone‌ at least three times a day."

Thanks for reaching out! We'll be happy to help. It's normal for your apps and features to need to adjust up to 48 hours after an update. Let's have you reach out to us in a DM if this is still an issue after that time so we can help you look into this further. — Apple Support (@AppleSupport) March 19, 2022

As the update was released last week, some users may be over the 48 hours wait that Apple recommends. In that case, customers may be also be advised to replace their battery if it's low on battery health. Battery health is how much of your battery's original charge it still has. Over time, the lithium-ion batteries in smartphones can lose charge. Apple lets users check their battery's health by going into Settings, Battery, and tapping Battery Health.

When your battery is due to be replaced, iOS will alert you. The lower your battery health, the less charge it can hold and thus the shorter the battery life. Apple says the batteries in iPhones are designed to retain up to 85% health after 500 complete charge cycles. Apple offers more information on maximizing your ‌iPhone‌ battery life and health here.

iOS and iPadOS 15.4 were released as free software updates to ‌iPhone‌ and iPad users last week. All iOS and iPadOS updates include security improvements, but this latest update also included some major new features. Perhaps the largest feature is the ability for owners of the iPhone 12 and later to unlock their iPhones using Face ID while wearing a mask. You can learn more about using ‌Face ID‌ while wearing a mask and learn about what else is new in the update with our guide.