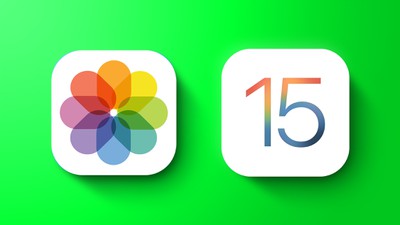 When creating and viewing Memories, the ‌Photos‌ app has always supported basic music integration, but now ‌Apple Music‌ subscribers can choose to add any ‌Apple Music‌ song to a memory.

When a memory is selected in ‌Photos‌, new "Memory Mixes" can suggest songs based on your ‌Apple Music‌ listening history that may go with the photos and videos, or you can choose a song yourself for a more personalized experience.

In addition to auditioning songs, Memory mixes can also suggest Memory Looks – essentially color filters – that may go with your chosen memory and accompanying music in order to evoke a particular atmosphere.

Here's how you can select songs from ‌Apple Music‌ to add to your Memories in ‌iOS 15‌ (a public beta is coming in July, with an official release due in the fall).

Great move - but then when people try to share it on social media platforms or YouTube, the song will get flagged for copyright infringement.

I cannot tell you how many of my vacation videos have had the sound muted by YouTube because of the song playing in the background somewhere. All my Caesar's Palace fountain show videos are basically silent films, despite those songs being licensed by the casino for the fountain shows.
Score: 3 Votes (Like | Disagree)

I wish they cared about users who have their won music libraries and fix the issues with the Music app.

I had a massive library of meticulously curated songs - many that were live recordings, some of which I recorded, that only existed in my Library - and when Match first landed, it totally jacked up my collection. It hasn't been the same since. Has definitely adversely effected the amount of live recordings I listen to. Been a sad nightmare. Sux.

That out of the way, ANY attention paid Music is welcome. While it has played a role in music discovery, there remains a loooong way to go. Amongst many other things, I'd like to see more robust data - inline with liner notes from the vinyl days. Who engineered the album, who are the musicians, where was it recorded, etc. Why that data still hasn't been included with digital audio files is baffling. It definitely helps listeners better connect with the music in deeper, more meaningful ways.
Score: 3 Votes (Like | Disagree)

cmichaelb
I wish they cared about users who have their won music libraries and fix the issues with the Music app.
Score: 3 Votes (Like | Disagree)

TheYayAreaLiving
I didn’t know you could do that. Thank you MR.
Score: 2 Votes (Like | Disagree)

blicked
Please just let me turn memories off. I don't want them, don't need them. Whenever I accidentally hit the "For You" button (because I never intentionally hit it) I get annoyed as **** and spend five minutes hitting "suggest fewer memories like this" on every single automatically generated memory. Doesn't seem to work.
Score: 2 Votes (Like | Disagree)

It truly is a mess. I have live albums that I can't even play anymore because there are multiple versions of each song showing up. Like, "Song A," "Song A (live)," "Song A (feat. person X)"... So instead of medleys where songs flow together, I get the same song 3 times in a row. And I can't even use a playlist to recreate the album because then there are gaps in songs where there should be none.

That's even more irritating to me than albums that have random foreign versions of songs mixed in.

That’s my [almost] exact experience. A live recording that is a mix of live and studio versions. No one wants the studio version of a song to play during my live performance of that same song. Not a single person. None.
And yet…
Score: 1 Votes (Like | Disagree)
Read All Comments

iOS 15: How to Enhance Photos App Memories With 'Memory Looks'

Wednesday June 30, 2021 6:03 pm PDT by Tim Hardwick
In iOS 15, Apple's native Photos app features a considerable update to Memories, including a new design, integration with Apple Music, a more interactive interface, and "Memory Looks." This article explains what Memory Looks are and how you can apply them to your own Memories in the Photos app. In the latest version of the Photos app, Apple has added the ability for users to customize the...
Read Full Article

iOS 15: How to Select the Images That Appear in a Photos Memory

Thursday July 1, 2021 11:23 am PDT by Tim Hardwick
In iOS 15, Apple has enhanced the Memories experience in Photos to make individual memories more customizable, more intelligent, and generally more enjoyable to watch and interact with. One notable change in this overhaul to Memories is the ability to easily manage which images appear in a memory. With the new interface, you can quickly select which pictures you want included in the memory...
Read Full Article

iOS 15: How to Adjust the Date and Time of Photos

Friday June 18, 2021 10:46 am PDT by Tim Hardwick
In iOS 15, the Photos app has been given a significant update that includes a richer Info pane to view information about a photo in your library, such as the camera, lens, and shutter speed used, the file size of the image, and where the image came from if it was saved from within another app. In another notable addition, you can also edit the date and time when a photo was taken. Here's...
Read Full Article • 61 comments

iOS 15: How to Get the Photos App to Feature a Person Less Often

Thursday July 8, 2021 3:03 pm PDT by Tim Hardwick
In iOS 15, Apple has improved the control you have over the people and places that show up in your Photos Memories, letting you fine tune just who pops up in the ‌Photos‌ app and Home Screen widget. In previous versions of iOS, you could select "Suggest Fewer Memories Like This" when viewing a memory in the "For You" section of ‌Photos‌, or you could remove a photo from photo...
Read Full Article

iOS 15: How to See All the Photos People Have Shared With You in Messages

Monday July 12, 2021 4:53 pm PDT by Tim Hardwick
Most iPhone and iPad users enjoy sharing media with each other over Messages, and in iOS 15, Apple has acknowledged this popularity by adding a new section in the Photos app called Shared with You. If someone shares a photo or video with you in the Messages app, it will show up in Shared with You in Photos. You can find this new section by selecting the For You tab. If the photo shared...
Read Full Article

iOS 15: How to Correct Errors in the Photos People Album

Monday July 12, 2021 4:56 pm PDT by Tim Hardwick
Regular users of Apple's Photos app will be undoubtedly familiar with the People album, which tries to identify faces in your pictures so that you can label people with their proper names and use that label as an organizing element in your library or as a discoverable tag. Most Photos app users will also know that Apple's on-device face recognition isn't always totally accurate, and there...
Read Full Article

iOS 15: How to Filter Search Results in Maps

Thursday July 29, 2021 4:35 pm PDT by Tim Hardwick
In iOS 15, Apple has worked to improve the search results in its Maps app, and has added the ability to filter results by options like what specific cuisine you're looking for, whether a restaurant is open or offers takeout, and more. In the following steps, we've demonstrated how it works by looking for restaurants that serve a particular type of cuisine, but you can filter other...
Read Full Article

Tuesday June 8, 2021 2:42 pm PDT by Tim Hardwick
Apple has rolled out a new spatial audio feature for Apple Music subscribers that uses Dolby Atmos to create a richer, more immersive soundstage when listening to songs in the Apple Music catalog. With Spatial Audio and Dolby Atmos enabled, the subjective experience is that musical notes are coming from all around you. The steps below show you how to control the new audio feature on any iOS ...
Read Full Article • 121 comments