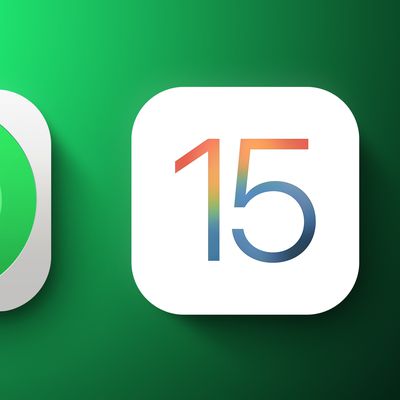 What's New With Find My in iOS 15: Tracking When iPhone is Off, Live Locations, Locate After Erase and More

Friday July 30, 2021 2:24 pm PDT by Juli Clover
Since introducing the unified Find My app, Apple has been working to improve the ‌Find My‌ experience. iOS 15 brings some major new features to ‌Find My‌, including features like live locations and the ability to track an iPhone even after it's been erased or powered off. This guide covers everything that Apple added to the ‌Find My‌ app in ‌iOS 15‌. Live Locations When you track a friend or a...
Read Full Article • 64 comments

Wednesday July 28, 2021 2:42 pm PDT by Juli Clover
There are some major improvements to Siri in iOS 15, with Apple introducing features that iPhone users have long asked for. On devices with an A12 chip or later, ‌Siri‌ can do on-device processing and there's support for offline requests. This guide highlights all of the new ‌Siri‌ features that are available in iOS (and iPadOS) 15. On-Device Speech Processing and Personalization Starting in ...
Read Full Article • 69 comments

Thursday July 29, 2021 4:45 pm PDT by Juli Clover
Apple has made so many improvements to the Maps app in iOS 15 that it's almost an entirely different experience. There are better driving directions, improved transit directions, and more immersive AR-based walking directions. The Maps design has once again been updated, and you can see everything at an incredible level of detail that wasn't available before, especially in cities and in...
Read Full Article • 121 comments

Tuesday July 20, 2021 2:35 pm PDT by Juli Clover
Apple in iOS 15 made some updates to notifications, improving how they look, how they're delivered to you, and the control that you have over them. This guide covers all of the changes that Apple made to notifications in the iOS and iPadOS 15 updates. New Look for Notifications Notifications from apps now display larger app icons so it's easier to see what's what at a glance. When you...
Read Full Article • 18 comments

Tuesday July 20, 2021 3:42 pm PDT by Juli Clover
Apple today released iOS 14.7 to the public after several months of beta testing. iOS 14.7 is a smaller update than some of the updates that preceded it, but there are still a few notable features. Subscribe to the MacRumors YouTube channel for more videos. We've highlighted everything that's new in iOS 14.7 below. MagSafe Battery Pack Support Apple in July introduced the MagSafe Battery...
Read Full Article • 78 comments

Monday July 26, 2021 5:26 pm PDT by Juli Clover
Apple has long had a Do Not Disturb function that can be activated when you want to mute incoming notifications to avoid being bothered, but with iOS 15, Apple is taking Do Not Disturb to a new level with Focus. With Focus, you set an activity that you're doing, such as working, exercising, reading, or spending time with family, and block out the notifications that are unrelated to those...
Read Full Article • 69 comments

Apple's MagSafe Battery Pack: Everything You Need to Know

Monday July 26, 2021 5:26 pm PDT by Juli Clover
Apple in July unveiled its rumored MagSafe Battery Pack, introducing an add-on battery that's designed to work with the iPhone 12, iPhone 12 mini, iPhone 12 Pro, and iPhone 12 Pro Max. Priced at $99, the MagSafe Battery Pack provides extra battery life for the ‌iPhone 12‌ lineup and it also has a few nifty features, such as a reverse wireless charging option that lets it be charged through the...
Read Full Article • 159 comments

Everything New in the iOS 15 Messages App: Shared With You, Photo Collages, Memoji Updates and More

Friday July 9, 2021 1:52 pm PDT by Juli Clover
Apple's FaceTime app was the main focus for many of the iOS 15 updates that were introduced, but the Messages app wasn't entirely forgotten. Apple introduced a new Shared with You feature and streamlined several interface elements to make the Messages experience more pleasant. This guide outlines all of the new features that Apple added to the Messages app in ‌iOS 15‌ and iPadOS 15. Shared...
Read Full Article • 35 comments

Friday July 23, 2021 12:22 pm PDT by Juli Clover
Apple made some major improvements to the Photos app in iOS 15, adding some long-awaited and requested features along with unique capabilities that enable you to do more with your images than ever. There's a new Memories feature that lets you relive your favorite moments, metadata info can be viewed and edited, Visual Lookup lets you identify plants, landmarks, and more, and with Live Text, ...
Read Full Article • 80 comments

Wednesday June 23, 2021 9:49 am PDT by Juli Clover
Apple in iOS 15 is making major changes to the FaceTime app, introducing a whole range of new features that turn ‌FaceTime‌ into the ultimate hub for interacting with friends, family, coworkers, and more. Our ‌FaceTime‌ guide outlines everything that's new in the ‌FaceTime‌ app in ‌iOS 15‌ and iPadOS 15, and many of these features are also in macOS Monterey and can even be used in tvOS 15. We've...
Read Full Article • 52 comments

Wednesday June 30, 2021 10:44 am PDT by Eric Slivka
Update June 30: The first public betas of iOS 15 and iPadOS 15 are now available to download. Public beta programs for watchOS 8 and tvOS 15 are also rolling out, but Apple has yet to release a public beta for macOS Monterey. Announced in June at Apple's Worldwide Developers Conference, ‌iOS 15‌ and ‌iPadOS 15‌ are Apple's next-generation operating systems for iPhone and iPad. ‌iOS 15‌ and...
Read Full Article

Monday May 24, 2021 12:44 pm PDT by Juli Clover
Apple today released iOS 14.6 and iPadOS 14.6 to the public. The iOS 14.6 update isn't quite as significant as the iOS 14.5 update that preceded it, but it still introduces a number of notable new features. We've highlighted everything that's new in iOS and iPadOS 14.6 below. Apple Music Spatial Audio and Lossless Audio Support Apple in May introduced two new ‌Apple Music‌ features, which...
Read Full Article • 86 comments

Monday July 12, 2021 4:04 pm PDT by Juli Clover
Apple in June 2021 added new Lossless and Hi-Res Lossless tiers to Apple Music, but so far, it's a bit confusing trying to determine which devices support ‌Apple Music‌'s Lossless Audio and which devices do not. Subscribe to the MacRumors YouTube channel for more videos. This guide covers everything that we know so far about Lossless Audio, and we'll be updating it as we learn more. What is...
Read Full Article • 456 comments

Thursday May 13, 2021 11:07 am PDT by Hartley Charlton
In April 2021, Apple revealed the second-generation Apple TV 4K (2021), bringing high framerate HDR to the ‌Apple TV‌ for the first time and the A12 chip for improved performance, alongside a redesigned Siri Remote. This model replaced the first-generation ‌Apple TV‌ 4K released in 2017. Although the first-generation ‌Apple TV‌ 4K has now been discontinued by Apple, it is common to find it...
Read Full Article • 79 comments

Tuesday May 11, 2021 3:43 pm PDT by Hartley Charlton
In April 2021, Apple revealed the second-generation Apple TV 4K, bringing high framerate HDR with Dolby Vision to the ‌Apple TV‌ for the first time and the A12 chip for improved performance, alongside a redesigned Siri Remote. The ‌Apple TV‌ HD was first released in 2015 and has remained in Apple's lineup since then as an entry-level option, and now it comes with the upgraded ‌Siri‌ Remote....
Read Full Article • 155 comments

Wednesday July 28, 2021 4:32 pm PDT by Juli Clover
Apple's AirTags do not come with a hole or any kind of attachment method, and short of drilling your own, you're going to need some kind of keyring, adhesive mount, or holder to attach the AirTag to various items. In this guide, we've rounded up a list of useful third-party ‌AirTags‌ accessories that you might want to check out. Apple Apple makes its own series of AirTag cases, which are...
Read Full Article • 111 comments

Wednesday May 5, 2021 6:19 am PDT by Hartley Charlton
In April 2021, Apple updated its popular iPad Pro lineup, introducing a faster M1 chip, a Liquid Retina XDR display, a Thunderbolt port, and more, replacing the previous models from March 2020. Subscribe to the MacRumors YouTube channel for more videos. Although the 2020 ‌iPad Pro‌ models have now been discontinued by Apple, it is common to find them available at discounted prices with...
Read Full Article • 76 comments

Friday April 30, 2021 12:06 pm PDT by Juli Clover
Apple is developing a next-generation version of the M1 Apple silicon chip, which will tentatively be called the "M2." The M2 is believed to be shipping as soon as 2021, and we're already hearing a limited number of rumors about it. What We Know There are actually several successors to the ‌M1‌ chip in the works at Apple's labs in Cupertino, and though we don't know the name of the...
Read Full Article