Upcoming Apple Products Guide: Everything We Expect to See in 2022 and Beyond

The MacRumors guide to upcoming products is designed to provide an overview of everything that we're expecting to see from Apple, both in the near and more distant future. Dates listed are not always concrete, but are based on the most recent rumors and information that we have. 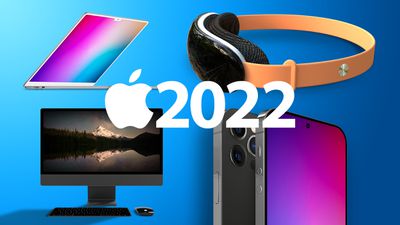 We're updating the guide on a regular basis, so it will be the go-to place to see every Apple product that's on the horizon at a glance. For more detail on the rumors we've heard about each upcoming item, make sure to click on the links to visit our roundups.

Apple in March 2022 held a "Peek Performance" event that saw the introduction of the first products of the year.

Apple unveiled the third-generation iPhone SE with 5G and an A15 chip, the fifth-generation iPad Air with M1 chip and 5G, the Mac mini/Mac Pro hybrid called the Mac Studio with new high-end M1 Ultra chip, and the Studio Display, a new 27-inch 5K display that's priced at $1,599.

Apple introduced iOS 16, iPadOS 16, macOS 13 Ventura, watchOS 9, and tvOS 16, the next-generation versions of its software, all of which are available to developers for testing and will be released in the fall.

Apple sometimes holds a second fall event in October that's focused on Macs and iPads, but that didn't happen in 2022. Instead, we saw the launch of the new iPad Pro models, the 10th-generation iPad, and the third-generation Apple TV 4K via press release during the month.

Earlier in the year, there were rumors suggesting that some Macs could be refreshed before the end of 2022, including the 14 and 16-inch MacBook Pro models and the Mac mini, but multiple rumors have said no more Macs are coming in 2022. That means there are no additional events or product refreshes expected in November and December, with Apple's next product announcements coming in 2023.

We are waiting on new Macs, and current rumors suggest Apple could hold its first event of 2023 early in the year. Here's what we might see:

Apple is developing a high-end version of the Mac mini, which will feature additional ports and a more powerful Apple silicon chip. It's expected to use M1 Pro and M1 Max chips, and it could have a fresh design. There's no concrete word on when it might be released.

Apple is working on updated versions of the 14 and 16-inch MacBook Pro models that will use M2 Pro and M2 Max chips. The M2 Max chip will feature a 12-core CPU and a 38-core GPU, and the new machines could launch as soon as late 2022.

Further in the Future

Apple has held two events in 2022, with the following products announced:

We have a list of all the products that Apple released in 2021, which can be a good indicator of the release timelines of 2022 products.

Know of an upcoming product that we've missed on this list or see an error that needs to be fixed? Send us an email here.

Sunday September 11, 2022 2:20 pm PDT by Joe Rossignol
Following its September event focused on new iPhone and Apple Watch models, Apple often holds another event in October focused on new iPad and Mac models, and this year will likely be no exception. October is still three weeks away, but we already have a good idea of the products that would likely be announced at an event next month. For the October event, rumors suggest that Apple plans to...
Read Full Article • 187 comments

Monday August 8, 2022 10:43 am PDT by Joe Rossignol
While the iPhone 14 and Apple Watch Series 8 are expected to be announced in September as usual, there are several more Apple products rumored to launch later this year, including new iPad and Mac models and more. Beyond the iPhone and Apple Watch, we've put together a list of five Apple products that are most likely to be unveiled by the end of 2022. Second-Generation AirPods Pro Apple...
Read Full Article • 46 comments

Sunday January 23, 2022 10:32 am PST by Juli Clover
Apple is working on a number of new products that are set to launch this fall, and Bloomberg's Mark Gurman says that it will be "the widest array" of new devices that Apple has introduced in its history. In his latest "Power On" newsletter, Gurman explains that Apple is working on four new flagship iPhones (iPhone 14, iPhone 14 Max, iPhone 14 Pro, and iPhone 14 Pro Max), an updated low-end Ma...
Read Full Article • 287 comments

Friday October 22, 2021 2:55 pm PDT by Sami Fathi
Apple has had a busy year in 2021, releasing several new products, updates to services, new software updates, and more. Most recently, Apple finally announced the long-rumored redesigned 14-inch and 16-inch MacBook Pros, which was by far one of the most talked-about and anticipated product announcements this year. With the new MacBook Pro models announced, some customers may be wondering if...
Read Full Article • 77 comments

Tuesday April 13, 2021 10:04 am PDT by Juli Clover
Following an overnight leak by Siri, Apple today officially announced that it will be holding a special "Spring Loaded" event on Tuesday, April 20 at 10:00 a.m. Pacific Time at the Steve Jobs Theater on the Apple Park campus in Cupertino, California. As with all of Apple's 2020 events, the April 2021 event will be a digital-only gathering with no members of the media invited to attend in...
Read Full Article • 290 comments

Thursday March 18, 2021 9:41 am PDT by Joe Rossignol
It's been a whirlwind of a month for Apple rumors. First, we heard from leaker Jon Prosser that an Apple Event was planned for March 16, but that was ruled out by Bloomberg's Mark Gurman. Once that date passed, Prosser and other leakers then suggested there would be an Apple Event on March 23, which is seemingly not happening either. With attention now shifting to April, we've put together...
Read Full Article • 64 comments

Tuesday October 1, 2019 11:13 am PDT by Joe Rossignol
With last month's iPhone 11 and Apple Watch Series 5 event in the rearview mirror, and several more products in the rumor mill, it is fun to look ahead and speculate about if and when Apple might host an October event this year. Apple has several rumored products in its pipeline, including a 16-inch MacBook Pro with a scissor keyboard and an all-new design, refreshed iPad Pro models that...
Read Full Article • 110 comments