Unlock with Apple Watch Not Working? Here's How to Fix the Problem

When Apple introduced iOS 14.5 in April, it introduced the ability to unlock your iPhone with Face ID while wearing a mask, so long as you are wearing an Apple Watch.

Subscribe to the MacRumors YouTube channel for more videos.
In the current health climate, many people are wearing masks that cover their faces when going outside, visiting stores, and other tasks, which is why Apple added the "Unlock With Apple Watch" to the Face ID settings in iOS. However, some users have found this function has been inconsistent or even failed to work at all. If that sounds like your experience, try the tips in this article to see if you can get it working again.

But before you do, let's quickly recap how the feature works.

How Unlock With Apple Watch Works

When you look at your locked ‌iPhone‌ and Face ID recognizes that you have a mask on, it checks if you're wearing your Apple Watch, and if so, unlocks your phone. The process is similar to what happens when unlocking a Mac with an Apple Watch. When the unlock occurs, the user receives a haptic buzz and a notification on the Apple Watch informing them that the unlocking procedure has been successful. It's worth noting that you can only use your Apple Watch to unlock your ‌‌iPhone‌‌ while wearing a mask – it can't be used for authenticating Apple Pay or App Store purchases. 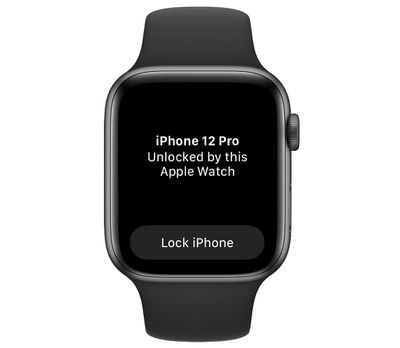 The "Unlock ‌iPhone‌ With Apple Watch" option can be switched on in Settings -> Face ID & Passcode on your ‌iPhone‌. To use your Apple Watch to unlock your ‌‌iPhone‌‌, your watch needs to be nearby and on your wrist, and you need to have unlocked it with your passcode.

The first time you attempt to unlock your ‌‌iPhone‌‌ with Apple Watch when wearing a mask, your ‌‌iPhone‌‌ will ask you to enter your passcode. Once you've done that, you should be able to unlock your ‌iPhone‌ when wearing a mask (and you do need a mask on – it won't work without one). Similarly, you'll need to re-enter your passcode if you've since removed your watch and put it back on, or it won't work.

If all those conditions are met and you still can't get Unlock ‌iPhone‌ With Apple Watch to work, the following suggestions might help you get it up and running.

Your Apple Watch might be paired with your ‌iPhone‌, but is it actively connected? You can easily check on your Apple Watch by swiping up from the bottom of the screen to bring up the Control Center. If there's a green ‌iPhone‌ icon in the top-left corner, your watch is successfully connected to it.

If the green icon isn't showing, it's worth checking that Bluetooth is enabled on your ‌iPhone‌ (Settings -> Bluetooth) and that your Apple Watch is displayed as connected in the "My Devices" list.

2. Turn Off "Unlock With iPhone" on Apple Watch

On Apple Watch, there's an option in watchOS that lets your ‌iPhone‌ unlock your watch as long as the ‌‌iPhone‌‌ is unlocked (Settings -> Passcode -> Unlock With iPhone).

Some users have found that disabling this feature then restarting both devices makes Unlock With Apple Watch work on ‌iPhone‌. Of course, this is a workaround rather than a fix, because you're turning off one feature to resurrect another, so you'll have to weigh up whether the compromise is worth it in your particular use case.

3. Turn Apple Watch Passcode Off Then Back On Again

Given that enabling an Apple Watch passcode is one of the requirements of Unlock With Apple Watch, it's worth turning this setting on and off again to see if it triggers something.

Unlock With Apple Watch relies on Face ID detecting a mask on your face, so it's worth resetting Face ID just to make sure it's not the crux of your problem.

5. Make Sure Wrist Detection is Enabled

6. Unpair Then Re-pair Your Apple Watch

Unpairing Apple Watch from ‌iPhone‌ has worked for some people suffering from the issue. It takes a bit of time, but if you miss the "Unlock With ‌iPhone‌" feature on your Apple Watch, then it's probably going to be worth the effort as a last resort.

If none of the above suggestions worked for you, it's likely you'll have to wait for Apple to fix whatever's going wrong in a future update. Apple has been working to solve similar unlocking issues between ‌iPhone‌ and Apple Watch in recent versions of iOS, so hopefully we'll see a fix in the next software update to iOS 14 or with the release of iOS 15 in September.

Monday April 26, 2021 9:45 am PDT by Tim Hardwick
iOS 14.5 is now available, and a key new feature is the ability to unlock an iPhone with Face ID while wearing a mask, so long as you are wearing an Apple Watch. Read on to learn how this feature works. Apple introduced its Face ID facial recognition system in November 2017 with the launch of the iPhone X, offering users an even simpler way to unlock their smartphone than traditional...
Read Full Article • 96 comments

How to Use Apple's Live Listen Feature With Beats Fit Pro

Monday November 15, 2021 6:16 pm PST by Tim Hardwick
Since 2014, Apple has included a little-known feature in iOS called Live Listen that allows an iPhone or iPad to serve as a remote microphone for an MFI-compatible hearing aid. In iOS 14.3 and later, Live Listen supports Beats Fit Pro, Apple's sporty Beats-branded earphones, making it possible to use your iOS device as a directional mic and have the audio relayed to your ears. As an...
Read Full Article

Friday September 24, 2021 1:19 am PDT by Tim Hardwick
If you've got a new iPhone 13 to replace your current iPhone, there are a few ways you can migrate your data across to the new device. You can restore your apps, data, and settings from your most recent iCloud backup, restore from a backup on your computer, or you can use device-to-device migration to transfer your data directly from your previous iPhone to your new one. There are currently known ...
Read Full Article • 101 comments

Thursday October 14, 2021 11:36 am PDT by Tim Hardwick
Losing your Apple ID password can make your digital life a misery, because it can leave you locked out of the account that you use to manage your Apple devices, unable to access your iCloud data and manage your app and service subscriptions. In this scenario, Apple can't just reset your password for you, especially if your have two-factor authentication enabled. Setting up a recovery is one ...
Read Full Article • 54 comments

Monday November 8, 2021 11:08 am PST by Tim Hardwick
Note: The SharePlay feature in FaceTime requires macOS Monterey 12.1, which is only available to beta testers at the time of writing. Expect Monterey 12.1 to be released to all users in late fall 2021. In macOS Monterey, FaceTime received some major enhancements on the Mac, including the ability for you to share your screen with other people on a video call. Officially called SharePlay,...
Read Full Article

How to Hard Reset or Force Restart All iPhone 13 Models

Friday September 24, 2021 2:15 am PDT by Tim Hardwick
Apple's iPhone 13 mini, ‌iPhone 13‌, iPhone 13 Pro, and ‌iPhone 13 Pro‌ Max come in the same sizes as last year's iPhone 12 series, and they share the same design elements with Apple's 2020 models, such as an all-screen design and no Home button on the front. If you're upgrading from a device with a Home button, keep reading to learn how to power on and off, force a restart, enter...
Read Full Article

Thursday October 14, 2021 4:33 pm PDT by Juli Clover
Apple's second fall event is coming up and is set to take place on Monday, October 18 at 10:00 a.m. Pacific Time. As with Apple's last several events, "Unleashed" will be digital only and streamed online. It is expected to focus on the MacBook Pro models, which many Apple fans are eagerly awaiting. This how to offers details on how you can watch the event and when it will take place in your...
Read Full Article • 60 comments

Friday October 15, 2021 1:03 am PDT by Tim Hardwick
WhatsApp end-to-end encrypted backups are now rolling out for iPhone users, Facebook has announced. Until now, WhatsApp let users back up their chat history to ‌‌iCloud‌‌, but the messages and media contained in the backups weren't protected by WhatsApp's end-to-end encryption while in ‌‌Apple's cloud servers‌. End-to-end encryption ensures only you and the person you're...
Read Full Article