How to Watch Movies / TV Shows Together Over FaceTime

In iOS 15.1 and iPadOS 15.1, FaceTime received some major enhancements, including the ability for you to share your screen with other people on a video call. 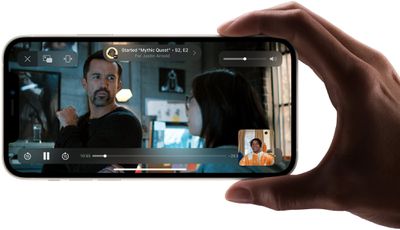 Officially called SharePlay, this screen sharing feature also lets you watch streamed movies and TV shows together. When you're on a ‌‌FaceTime‌‌ call, everyone on the call will see the same synced playback and video controls.

The following steps explain how it's done. Note that both parties need to be using ‌FaceTime‌ on an Apple device that supports iOS 15.1 or iPadOS 15.1 for SharePlay to work. SharePlay is not compatible with the browser version of ‌FaceTime‌ available to non-Apple device users, and isn't yet available for macOS Monterey.

Did you know that you can also listen to music together using SharePlay? Simply launch Apple Music and choose a song for everyone to hear it at the same time.

Anyone on the call can contribute to the shared music queue. The SharePlay music interface will display synced playback controls, and everyone will be able to see what's coming up next.

1 hour ago by Joe Rossignol