iOS 15: How to Block Background Noise in FaceTime With Voice Isolation

In iOS 15 and iPadOS 15, Apple has made its FaceTime video calling platform more appealing with several new features that aim to make it a viable alternative to rival video conferencing apps. However, one of these features, called Voice Isolation, can also be used with third-party apps like WhatsApp and Teams to make it easier for people hear your voice on a video call. 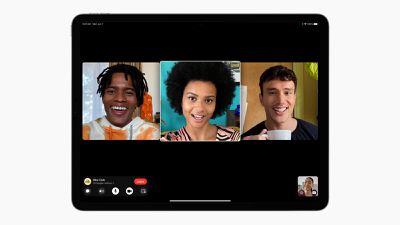 When you're on a call, your device's mic usually picks up a wide range of sounds in the environment, but with Voice Isolation, machine learning distinguishes these sounds, blocks out any ambient noise and prioritizes your voice so that it comes through clearly.

Sometimes, however, you might want a wide range of sound to come through on a video call, so Apple has also introduced Wide Spectrum, a feature that the company says can pick up "an entire symphony of sound – your voice and everything around you." And like Voice Isolation, Wide Spectrum can be used with any video calling app on your device.

The following steps show you how to enable voice isolation and wide spectrum when on a video call on an iPhone or iPad running ‌iOS 15‌ or ‌iPadOS 15‌.

Your chosen microphone mode will now be activated, and you can turn it off at any time simply by accessing the Control Center again and selecting Standard.

iOS 15: How to Blur Your Background on a FaceTime Call

Wednesday June 23, 2021 9:44 am PDT by Tim Hardwick
In iOS 15, Apple brings several enhancements to FaceTime, including new visual and audio effects to improve the video call experience. One of the new visual features is Portrait mode in calls. With this mode enabled, you can blur your background so that the focus is on you rather than what's behind you. The feature is commonly used by other video conferencing apps like Zoom and Teams to ...
Read Full Article

How to Enable Wide Spectrum Audio in FaceTime on Mac

Thursday February 17, 2022 3:19 pm PST by Tim Hardwick
In macOS Monterey, Apple brings several enhancements to its FaceTime video and audio calling platform, including new visual and audio effects to improve your call experience. One of the audio features is Wide Spectrum mode. This microphone mode brings every single sound into your call, making it ideal for when you want the other person to hear everything that's happening in the space you're ...
Read Full Article

How to Watch Movies / TV Shows Together Over FaceTime

Tuesday August 17, 2021 6:36 pm PDT by Tim Hardwick
In iOS 15.1 and iPadOS 15.1, FaceTime received some major enhancements, including the ability for you to share your screen with other people on a video call. Officially called SharePlay, this screen sharing feature also lets you watch streamed movies and TV shows together. When you're on a ‌FaceTime‌ call, everyone on the call will see the same synced playback and video controls. The ...
Read Full Article

How to FaceTime a Windows PC User From Mac

Monday December 6, 2021 4:33 pm PST by Tim Hardwick
In macOS Monterey, you can enable anyone, even if they don't have an Apple device, to join a FaceTime call with you by creating a link to a ‌FaceTime‌ conversation that can be shared anywhere. Using this new link function, friends and family members who do not have an Apple account can log into a ‌FaceTime‌ call with you using a web browser opened on any non-Apple device, whether...
Read Full Article