Apple today updated its iOS 15 installation numbers for the first time in five months, giving us a clearer picture of just how many devices are running the latest update nine months after it launched and ahead of the introduction of iOS 16. 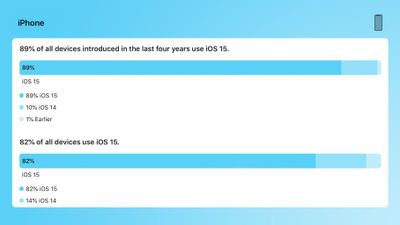 iOS 15 is now installed on 89 percent of iPhones introduced in the last four years, while 10 percent continue to run iOS 14. Just one percent have an earlier version of iOS installed.

Apple last updated its iOS 15 installation numbers in January, and adoption rates have risen since then. Back in January, just 72 percent of iPhones introduced in the last four years were running iOS 15. Since January, Apple has added multiple new features through iOS updates, including iOS 15.4, a major update that brought Face ID with a Mask support, Universal Control, and new emojis.

In June 2021, iOS 14 was installed on 90 percent of iPhones released in the last four years, while 85 percent of all devices were running the update, which is not too far off of the iOS 15 installation numbers.

Earlier today, we shared iOS 15 installation numbers from Mixpanel. Mixpanel estimated that the update was installed on 90 percent of devices, which was close to Apple's own numbers.

Next Monday, Apple will introduce ‌iOS 16‌ and iPadOS 16, and work on iOS 15 will taper off as Apple works to get the new software ready for a fall launch. We'll get a few bug fix updates before ‌iOS 16‌ launches, but we are not expecting any more major features to come in iOS 15.

Because IOS14 has zero issues ?

People here are ridiculous, they think all software is expected to be bug free and they don't want to upgrade even though iOS 15 is the same as 14. They hear about one person complaining about the issue and suddenly it's the worst iOS version ever.
Score: 18 Votes (Like | Disagree)

People here are ridiculous, they think all software is expected to be bug free and they don't want to upgrade even though iOS 15 is the same as 14. They hear about one person complaining about the issue and suddenly it's the worst iOS version ever.

After having iOS updates cripple devices, with no recourse to correct it, I am now extra cautious when it comes to updates.

Unless an update has a new feature that I really want to have, I try to ignore it.
Score: 10 Votes (Like | Disagree)

antiprotest
The real story is the large percentage who hated the idea of iOS 15 so much that they resisted the nagging, red badges, and security threats for so long.
Score: 8 Votes (Like | Disagree)

Nice! Is your device secure from Malware?
Score: 8 Votes (Like | Disagree)

addamas
Meanwhile Android is a joke :D about 7% phones has the newest OS
Score: 7 Votes (Like | Disagree)
Read All Comments

Sunday February 5, 2023 6:07 am PST by Joe Rossignol
Apple has discussed selling a new top-of-the-line iPhone alongside the Pro and Pro Max models in 2024 at the earliest, according to Bloomberg's Mark Gurman. Based on this timeframe, the device would be part of the iPhone 16 lineup or later. In a September 2022 edition of his weekly "Power On" newsletter, Gurman said there was "potential" for an iPhone 15 Ultra to replace the iPhone 15 Pro...
Read Full Article • 416 comments