Following the release of watchOS 8.5 for Apple Watch and iOS 15.4, you can now restore an Apple Watch that has a problem using a nearby iPhone. 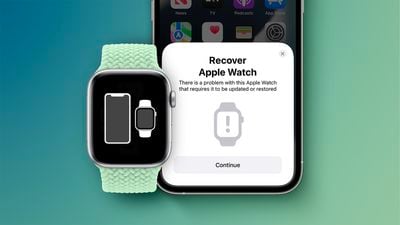 Before the updates were released, some Apple Watch models needing to be restored had to be mailed to an Apple Repair Center. In many cases, however, this is no longer a requirement thanks to the latest software updates, and you can restore a problematic Apple Watch at home using your ‌iPhone‌. Here's how it works.

The following steps assume that your ‌iPhone‌ is unlocked, updated to iOS 15.4 (Settings -> General -> Software Update), connected to Wi-Fi, and has Bluetooth turned on.

If the steps don't work, check your Wi-Fi connection – Apple recommends trying a 2.4GHz network instead of 5GHz. Also recommended is to avoid 802.1X or captive Wi-Fi networks, such as those in hotel rooms, if possible.

If you see a red exclamation mark on the Apple Watch, double-press the Side button and then follow the above steps. If that doesn't work and the exclamation mark remains, Apple advises to contact Apple Support and arrange an mail-in repair.

Thursday February 24, 2022 1:12 pm PST by Tim Hardwick
If you find yourself regularly swiping to a different watch face on your Apple Watch depending on what you're doing or where you are, this article is for you. Because thanks to the power that Apple has built into its Shortcuts app, it's possible to make the watch face on your Apple Watch automatically change based on the time of day or your location. Keep reading to learn how. One of the...
Read Full Article • 53 comments

How to Use a Private Wi-Fi Address on Apple Watch

Wednesday January 26, 2022 6:58 pm PST by Tim Hardwick
Did you know that your Apple Watch can use a different MAC address with each Wi-Fi network to prevent network operators from tracking your activity across different Wi-Fi networks? To communicate with a Wi-Fi network, a device has to identify itself to the network with a unique network address called a media access control (MAC) address. If your Apple Watch always uses the same Wi-Fi MAC...
Read Full Article

Wednesday December 22, 2021 3:06 pm PST by Tim Hardwick
AirDrop is a handy feature on Apple devices since it lets users discover nearby Macs and iOS devices and securely transfer files between them over Wi-Fi and Bluetooth. The only problem is that it doesn't always work. If that sounds like your current experience with AirDrop, this article offers some troubleshooting steps that may help. Subscribe to the MacRumors YouTube channel for more videos. ...
Read Full Article