iPhone users should upgrade to iOS 14.7 immediately to avoid a dangerous bug that disabled the device's Wi-Fi, sometimes irreversibly. 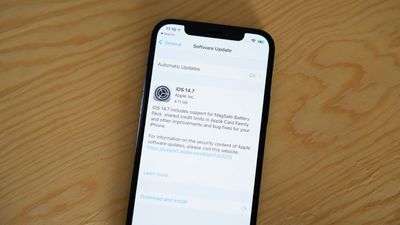 Before iOS 14.7, if a user connected to a Wi-Fi network with the name "%p%s%s%s%s%n," a bug completely disabled the device's ability to connect to Wi-Fi. According to user reports, doing so would "permanently disable" an ‌iPhone‌'s Wi-Fi functionality, making the bug rather dangerous.

While some have claimed the bug "permanently" disabled their ‌iPhone‌'s Wi-Fi, other users found that resetting their network settings after connecting to the network restored Wi-Fi for the ‌iPhone‌. Some affected users also had to resort to a factory reset to be able to reconnect to Wi-Fi.

Once the bug became widely reported, some users sought to prevent an attack by disabling the Wi-Fi auto-join feature and avoiding public Wi-Fi hotspots.

Earlier this month, the security researchers at ZecOps discovered that the vulnerability is even more dangerous in iOS 14.6 since it no longer requires users to connect to networks titled "%p%s%s%s%s%n," with attackers able to directly exploit it using Remote Code Execution with no interaction from the victim needed.

iOS 14.7 includes a crucial bug fix to prevent the bug that disabling Wi-Fi and leaves the exploit open for bad actors, so all users should update as soon as possible.

Last month, Apple previewed iOS 15, the next major update to iOS destined for a public launch this fall. iOS 14.7 will therefore likely be the last major update to the operating system ahead of iOS 15's release in the fall.

Monday November 28, 2022 10:42 am PST by Juli Clover
Apple has cut back on its Twitter advertising, according to Twitter CEO Elon Musk. In a tweet, Musk said that Apple has "mostly stopped" its Twitter ads, asking if Apple hates "free speech." Musk went on to publish a poll asking if Apple should "publish all censorship actions" taken that impact customers and he began retweeting content from companies that Apple has had moderation discussions ...
Read Full Article • 1350 comments