Apple today released iOS 14.7 to the public after several months of beta testing. iOS 14.7 is a smaller update than some of the updates that preceded it, but there are still a few notable features.

Subscribe to the MacRumors YouTube channel for more videos.
We've highlighted everything that's new in iOS 14.7 below. 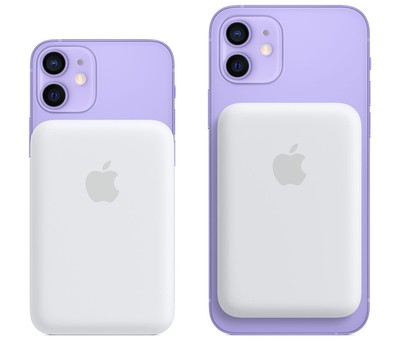 On the iPhone, you can view the charge level of the ‌MagSafe Battery Pack‌ through the Batteries widget either on the Home Screen or through the Today View, with the battery charge level available right alongside the ‌iPhone‌, Apple Watch, and AirPods battery readings.

Apple announced Apple Card Family sharing in April and rolled out most of the functionality in the iOS 14.6 update, but iOS 14.7 brings support for merging two Apple Cards.

Two current Apple Card owners who want to share a single ‌Apple Card‌ account can now merge their accounts together, resulting in a higher shared credit limit with the lower APR of the two accounts.

The account merging process can be initiated in the Wallet app.

With iOS 14.7, there's now an option to manage timers on the HomePod through the Home app.

Air Quality information in the Weather and Maps app has expanded to Canada, France, Italy, the Netherlands, South Korea, and Spain.

In the Podcasts app, the Podcasts library now has an option that lets users see all shows or only followed shows.

There are several noteworthy bug fixes that Apple has addressed in the iOS 14.7 update. Apple's release notes include the following:

The iOS 14.7 update also appears to fix a bug that could cause an ‌iPhone‌'s WiFi to stop working if connected to a WiFi network named "%p%s%s%s%s%n." This isn't mentioned in Apple's release notes, but connecting to a network with that name could impact the ‌iPhone‌'s functionality and it is no longer an issue after installing iOS 14.7.

According to Apple, there's a bug in iOS 14.7 that can prevent users from being able to unlock their Apple Watches by unlocking paired Touch ID-equipped iPhones.

As a temporary workaround, Apple recommends that users type their passcode into their Apple Watch to unlock it rather than relying on the Apple Watch, with the bug set to be addressed in a future software update.

That's not showing up for me, yet.

Yeah there was no iPadOS 14.7 I dont think it happened I kept on checking today and nothing
Score: 10 Votes (Like | Disagree)

AndiG
Pegasus Bugfix? Seems like Apple has a secret agreement with the FBI. Apple won‘t fix Pegasus and the FBI stops asking for a Backdoor?

I hear the Apple Fans crying „Oh no, Apple can not fix this bug - it is complicated!!!“

Well Apple, two quick fixes:
1) Let the users uninstall the Messages app and allow 3rd party vendors to offer SMS apps. Messages is so full of bugs and this is caused by tons of features. Messages is beyond repair.
2) Ask the user if he/she wants to accept a message from an unknown sender - BEFORE anything else happens.

That's not showing up for me, yet.
Score: 9 Votes (Like | Disagree)

Cosmosent
Does anybody @ macrumors.com Test the Performance of each iOS update ?

If NOT, that would be something most, I believe, would greatly appreciate !

There are apps out there that test the performance with real-world tests, as apposed to Synthetic Benchmarks used by GeekBench & the like.

And, it's NOT Rocket Science to figure-out one OR two good ones that have offered support for it for quite some time.
Score: 9 Votes (Like | Disagree)

Your screenshot is showing iOS 14.7. We're talking about iPadOS...iPadOS 14.7 hasn't been released yet.
Score: 9 Votes (Like | Disagree)

It may have been a recycled article

I think the update articles are “written” by a bot.
Score: 7 Votes (Like | Disagree)
Read All Comments

Apple's MagSafe Battery Pack: Everything You Need to Know

Tuesday July 13, 2021 3:10 pm PDT by Juli Clover
Apple in July unveiled its rumored MagSafe Battery Pack, introducing an add-on battery that's designed to work with the iPhone 12, iPhone 12 mini, iPhone 12 Pro, and iPhone 12 Pro Max. Priced at $99, the MagSafe Battery Pack provides extra battery life for the iPhone 12 lineup and it also has a few nifty features, such as a reverse wireless charging option that lets it be charged through the...
Read Full Article • 159 comments

Friday July 23, 2021 2:27 pm PDT by Juli Clover
Apple has made so many improvements to the Maps app in iOS 15 that it's almost an entirely different experience. There are better driving directions, improved transit directions, and more immersive AR-based walking directions. The Maps design has once again been updated, and you can see everything at an incredible level of detail that wasn't available before, especially in cities and in...
Read Full Article • 99 comments

Everything New in the iOS 15 Messages App: Shared With You, Photo Collages, Memoji Updates and More

Friday July 9, 2021 1:52 pm PDT by Juli Clover
Apple's FaceTime app was the main focus for many of the iOS 15 updates that were introduced, but the Messages app wasn't entirely forgotten. Apple introduced a new Shared with You feature and streamlined several interface elements to make the Messages experience more pleasant. This guide outlines all of the new features that Apple added to the Messages app in iOS 15 and iPadOS 15. Shared...
Read Full Article • 35 comments

Everything New in the iOS 14.5 Beta

Monday February 1, 2021 1:26 pm PST by Juli Clover
Apple today seeded the first betas of upcoming iOS 14.5 and iPadOS 14.5 updates, and while the new software serves as a deadline for when app developers must comply with App Tracking Transparency rules, there are also a handful of other changes worth noting. Subscribe to the MacRumors YouTube channel for more videos. Apple Watch iPhone Unlocking With iOS 14.5 and watchOS 7.4, Apple is making ...
Read Full Article • 112 comments

Tuesday July 20, 2021 2:35 pm PDT by Juli Clover
Apple in iOS 15 made some updates to notifications, improving how they look, how they're delivered to you, and the control that you have over them. This guide covers all of the changes that Apple made to notifications in the iOS and iPadOS 15 updates. New Look for Notifications Notifications from apps now display larger app icons so it's easier to see what's what at a glance. When you...
Read Full Article • 18 comments

Friday July 16, 2021 2:03 pm PDT by Juli Clover
Apple has long had a Do Not Disturb function that can be activated when you want to mute incoming notifications to avoid being bothered, but with iOS 15, Apple is taking Do Not Disturb to a new level with Focus. With Focus, you set an activity that you're doing, such as working, exercising, reading, or spending time with family, and block out the notifications that are unrelated to those...
Read Full Article • 69 comments

Thursday June 10, 2021 8:36 am PDT by Eric Slivka
Update June 30: The first public betas of iOS 15 and iPadOS 15 are now available to download. Public beta programs for watchOS 8 and tvOS 15 are also rolling out, but Apple has yet to release a public beta for macOS Monterey. Announced in June at Apple's Worldwide Developers Conference, iOS 15 and iPadOS 15 are Apple's next-generation operating systems for iPhone and iPad. iOS 15 and...
Read Full Article

Friday July 2, 2021 1:04 pm PDT by Juli Clover
Apple made some major improvements to the Photos app in iOS 15, adding some long-awaited and requested features along with unique capabilities that enable you to do more with your images than ever. There's a new Memories feature that lets you relive your favorite moments, metadata info can be viewed and edited, Visual Lookup lets you identify plants, landmarks, and more, and with Live Text, ...
Read Full Article • 79 comments