Apple's WWDC developer sessions continue to trickle out more details about new features in its latest operating systems for mobile and desktop, including new gamepad support in iOS 14.

During its keynote on Monday, Apple said support for Xbox's Elite Wireless Controller Series 2 and Adaptive Controller were coming in tvOS 14, and a WWDC session on Wednesday has confirmed that this support extends to ‌iOS 14‌ and iPadOS 14. 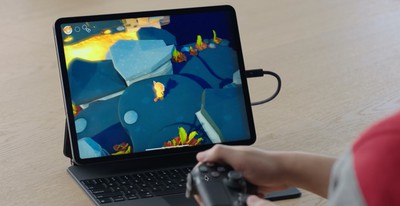 The session covers support for the Dual Shock's touchpad and lightbar, the Xbox Elite's paddles, zone-based rumble haptics, and motion sensors. In addition, game developers will be able to take advantage of OS-level controller button remapping, as well as readymade button glyphs for use in game interfaces.

Let's rumble! Discover how you can bring third-party game controllers and custom haptics into your games on iPhone, iPad, Mac, and Apple TV. We'll show you how to add support for the latest controllers — including Xbox's Elite Wireless Controller Series 2 and Adaptive Controller — and map your game's controls accordingly. Learn how you can use the Game Controller framework in tandem with Core Haptics to enable rumble feedback. And find out how you can take your gaming experience to the next level with custom button mapping, nonstandard inputs, and control over specialty features like motion sensors, lights, and battery level.

Another exciting highlight for game developers is keyboard and mouse support for gaming on iPadOS. Apple is letting developers finally add keyboard, mouse, and trackpad control options. While touch is obviously preferred for most iOS games, it opens the door for games like Civilization VI to add support for this in future updates.

And with future Macs powered by Apple Silicon able to run ‌iPhone‌ and ‌iPad‌ apps natively, we could see mobile games fully prepped for desktop peripheral use in macOS Big Sur.

Unfortunately, Apple missed the ball and I doubt we’ll see console-class games anytime soon on iOS. They had their opportunity to provide solid control solutions and welcome AAA games years ago, but I think that opportunity is gone and won’t come back for awhile.

Instead we got a race-to-the-bottom with crappy IAP games and cramped touch-based controls that you can’t play for more than 15 minutes without get carpal tunnel.

With the removal of Boot Camp and possibly 'almost good enough' virtualized Windows it makes streaming (for me, Xbox xCloud) the only remotely viable solution.

To me Apple will never recover from launching Apple Arcade (their 'flagship' gaming service) on high end hardware and then spending a long time featuring Frogger at the keynote.
Score: 5 Votes (Like | Disagree)

69Mustang
This is great news to me. But it just reinforces my opinion that Apple's gaming efforts would have been soooooo much further along if they had done this much earlier. Better late than never.
Score: 4 Votes (Like | Disagree)

magicvash
File this under never going to happen but man I really wish they’d let OpenEMU run on iOS.

Also, they should support the Nintendo Switch controllers!
Score: 2 Votes (Like | Disagree)

Controller support is awesome, but it's really cumbersome to have to re-pair every time I want to switch between an Apple TV/iPad/iPhone and I'm not gonna buy 3 controllers just so each device can have their own.

I think it's a limitation of the controller always locking to one device, but it'd be nice to see Apple make their own with one of their AirPods chips that makes it easy to switch devices.

I would like to introduce you to 8BitDo ('https://www.8bitdo.com/#Products'). You turn the controller on with start and then press A, B, X, or Y to select a pair mode. Once you pair your devices with a button you just select the mode you want when you turn the controller on and boom, no having to go into setting and repair as you move from device to device.
Score: 2 Votes (Like | Disagree)

MyopiaRocks
This reads like it's part of a broader deal with Microsoft: Microsoft support for apple silicon (office, windows, etc) in exchange for Apple support for the new xbox controller to encourage xbox adoption and cross-platform game development for both systems.

The controller pairing issue is a controller issue (hardware-software) but a nextgen controller might do a better job of "remembering" 2-3 previously-paired systems so it's not such of a pain each time to go from xbox to ipad to mac to xbox.
Score: 1 Votes (Like | Disagree)
Read All Comments