Apple has added a useful accessibility feature to iOS 14 called Sound Recognition that can notify users about important sounds like fire alarms and doorbells, as noted by Federico Viticci. This is especially helpful for people that are hard of hearing. 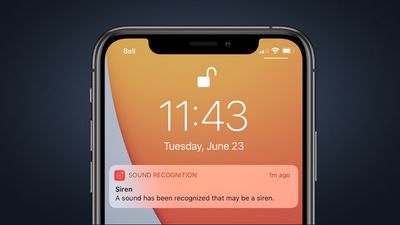 When the feature is enabled, Apple says your iPhone will continuously listen for certain sounds, and using on-device intelligence, will notify you when those sounds may be recognized. This includes sounds from fire alarms, sirens, smoke detectors, cats, dogs, household appliances, car horns, doorbells, knocking, water running, a baby crying, and shouting.

Apple says Sound Recognition should not be relied upon in circumstances where you may be harmed or injured, in high-risk or emergency situations, or for navigation. The feature is also in beta right now, so it may not be fully reliable yet.

Sound Recognition can be enabled in the Settings app under the Accessibility menu, and requires 5.5MB of on-device storage. Users can quickly access the feature in Control Center, complete with a list of sounds that users can set to be detected.

Installing the iOS 14 beta currently requires an Apple Developer Program membership for $99 per year, but a free public beta will be rolled out next month. The software update will be released to all users with an iPhone 6s or newer in the fall. Due to potential bugs, it is recommended that users avoid installing the software on their main devices.

Daniel B
Would be great if HomePod could recognize these sound and trigger an alert to my iPhone or Apple Watch.
Score: 14 Votes (Like | Disagree)

Most hard of hearing people have chosen (or should) to wear a hearing aid. This is just Apple intruding into more of your life for $$$. Apple's disclaimer is so wide that it is clear this is nothing but a gimmick that may work in some cases. If one chooses to put their safety in the hands of Mr. Cook, all the best....

That is incredibly ignorant of disabilities and basic medicine.
Score: 10 Votes (Like | Disagree)

MonstaMash
This is so awesome. Imagine if HomePod could identify the unique beep of a microwave being finished, or the tone of a dishwasher or washing machine finishing its cycle, and provide users a notification. It would help make "dumb" devices smart without needing to buy brand new appliances.
Score: 8 Votes (Like | Disagree)

Mr. Awesome
I’m sure this will be a very helpful feature for the hard of hearing, but I wonder what the battery impact will be...
Score: 5 Votes (Like | Disagree)

ritmomundo
While prob not the intended use, I can see this being useful where people wearing headphones are oblivious to sounds/voices directed towards them.
Score: 4 Votes (Like | Disagree)
Read All Comments