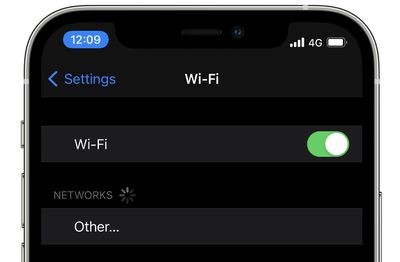 Notably, Apple's documentation confirms that the iOS 14.7 and iPadOS 14.7 updates address a WiFi-related vulnerability that could impact iOS devices when joining a malicious WiFi Network.

Impact: Joining a malicious Wi-Fi network may result in a denial of service or arbitrary code execution

Description: This issue was addressed with improved checks.

Back in June, a wireless networking naming bug was discovered, which could disable an iPhone or iPad's WiFi functionality. Joining a network named "%p%s%s%s%s%n" could, in some cases, permanently disable WiFi on a device, and in many other cases, it required resetting an ‌iPhone‌ entirely.

During the beta testing process, it was discovered that the bug was no longer functional, and Apple's notes make it clear that the issue has been addressed.

The iOS and iPadOS 14.7 updates also address a number of other security vulnerabilities related to audio files, Find My, PDFs, web images, and more, so all ‌iPhone‌ and ‌iPad‌ users should update to the new iOS 14.7 updates as soon as possible.

There are also security fixes in macOS Big Sur 11.5, tvOS 14.7, and watchOS 7.6. For Mac users who run older versions of macOS, Apple has released security updates for macOS Catalina and macOS Mojave.

macsplusmacs
Does this fix the Pegasus iMessage hole?
Score: 18 Votes (Like | Disagree)

Didn't fix the horrific battery life I've had on my iPhone 11 Pro since 14.6

Seems cellular related for me - if I turn off cellular and go Wi-Fi only, it can last two days!

Same here. Also noticed that my phone gets really hot just by doing simple tasks as mail or webbrowsing. Used to have 30% when I went to bed, after 14.6 it’s been 10% before 6pm
Score: 11 Votes (Like | Disagree)

dadiy
all we need to know is have they patched the current Pegasus attack.
Score: 8 Votes (Like | Disagree)

all we need to know is have they patched the current Pegasus attack.

Lol no way they patched it.
Score: 8 Votes (Like | Disagree)

Does this fix the Pegasus iMessage hole?

No, it does not, since the particular attack vector is not known (and there may be multiple variants). It's suspected that security faults in iMessage are one obvious way into an iPhone.

You will notice that the large list of security fixes in this release include numerous references to font and image parsing vulnerabilities. Exactly the kinds of things that an attacker can send in an iMessage.

Apple are trying hard to fill in the cracks of iMessage. But it's worrying that iMessage is probably stuffed full of zero-day vulnerabilities. Professor Matthew Green of John Hopkins University goes so far as to say ('https://blog.cryptographyengineering.com/2021/07/20/a-case-against-security-nihilism/') that iMessage probably needs to be completely rewritten from scratch using safe coding practises.
Score: 7 Votes (Like | Disagree)

Did they fix the screen wake issue on the Mac Mini's? (Thank goodness it only happens to me infrequently)