In iOS 14.5, Apple introduced two new Siri voices that are available in English, and also added a setup selection option that lets new users choose their preferred ‌‌Siri‌‌ voice rather than defaulting to a female voice in the United States. 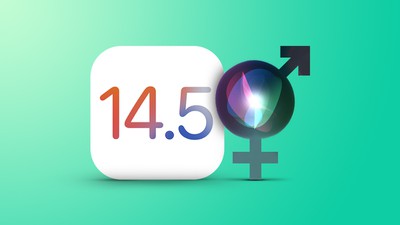 The new voices, which Apple says add more diversity in speech sound and pattern, run voice recordings through Apple's Neural Engine to make them flow more organically through phrases generated on the fly, so you should find that they sound more natural.

If you've updated your iPhone or iPad to iOS 14.5/iPadOS 14.5, you can still change the ‌Siri‌ voice after setup to work out which one you prefer. The following steps show you how it's done.

Note that that number of Voice options available depends on the Variety that you choose. For example, American offers the most with four voices, whereas the Australian, British, Indian, Irish, and South African options offer two.

If you have a Mac that's updated to macOS 11.3, you can find the same options in System Preferences under the Siri preference pane. For more helpful articles covering the new features in iOS 14.5, be sure to check out our dedicated guide.

antiprotest
Now Siri sounds so much better when she says she can't help me.
Score: 11 Votes (Like | Disagree)

theheadguy
I have to admit, I really like the new voices. The cadence and tones are very natural. In this respect, they really did a great job.
Score: 11 Votes (Like | Disagree)

Xak444
I actually really like the new voices. But honestly. I’m struggling to change it. I know Siri’s voice has changed a bit since the beginning but to me it’s been the same Siri for so long that changing it’s voice makes me feel like I’m loosing a good friend. It’s stupid but I can’t bring myself to change it.
Score: 10 Votes (Like | Disagree)

Wildsau
Still waiting for a strong German accent male voice that a) sounds like Schwarzenegger and b) shouts everything at me to remind me of my childhood.
Score: 7 Votes (Like | Disagree)

bgalakazam
Instead of focusing on adding 980970807 different voices, how about you translate iOS and MacOS in more languages? Still no Bulgarian despite Apple being around, what, 40 years? I don't feel represented and I am offended. Apple is supposed to be inclusive not divisive.
Score: 7 Votes (Like | Disagree)

GeoStructural
I can see someone complaining for designating a voice to be “male” or “female”.

These days we never know.
Score: 6 Votes (Like | Disagree)
Read All Comments

Tuesday May 11, 2021 11:56 am PDT by Joe Rossignol
Last month, Apple introduced a new iPad Pro with the same M1 chip found in the latest Macs, and early benchmark results indicate that the M1 iPad Pro is over 50% faster than the previous-generation iPad Pro. Based on five legitimate Geekbench 5 results (here's the fifth) for the fifth-generation 12.9-inch iPad Pro with the M1 chip, the device has average single-core and multi-core scores of...
Read Full Article • 341 comments