iOS 14: Everything New in Messages

Messages, one of the quintessential apps on the iPhone, iPad, and Mac, is the home of iMessages, Apple's exclusive device-to-device messaging protocol indicated by those well-known blue chat bubbles. 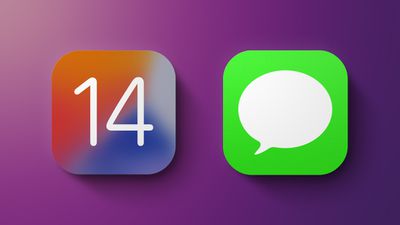 If you're an ‌‌iPhone‌‌ user you know how the Messages app works, but in iOS 14, the Messages app is getting some useful new features that are worth highlighting. Read on for a rundown of everything that's new, and make sure to check out our included how tos for instructions on how to use all of the new features.

You can get to these different views by tapping on the "Filters" button in the main conversation list in the Messages app.

There's also a new feature that lets you see typing indicators in the conversation list without needing to tap into a conversation, so you can see all of your contacts who are typing at a glance.

Your most important conversations can be pinned to the top of the Messages app by swiping to the right on any of the conversations in the main chat list.

Pinning a conversation turns it into a circle at the top of the Messages app, putting it front and center. You can pin a total of nine conversations.

Icons for pinned chats are dynamic, so you can see the photo of the participant overlaid with recent unread messages, Tapbacks, and typing indicators. Fun fact: Typing indicators on pinned chats will line up with the mouths for people who have a portrait photo or a Memoji selected as their shared image.

The images in pinned conversations are those that the people you're chatting with have chosen to share with you. Shared profile photos are a feature that was introduced back in iOS 13. Group chats will have the photo that has been selected for the group, and iOS 14 introduces new group photo customization options.

Inline replies is a feature that's designed to make it easier to organize chats that involve multiple people and/or multiple subjects.

If you're in a chat with several people and there are conversations going on that cover multiple topics, you can make it clear who you want to reply to by using an inline reply.

Make an inline reply by long pressing on the message that you want to reply to and choosing the "Reply" option.

Inline replies will show up threaded under the original reply, and if you tap on one, you can see the entire conversation separate from the main chat conversation. Inline replies can be used in single person conversations or in group chats, but they're most useful in multi-person chats.

Mentions in the Messages app are designed to let you direct a message to a specific person in a group chat to get their attention or to make it clear who you're speaking to in a multi-person conversation.

Mentions are available in both single person chats and group conversations, but are most useful in group chats.

You can mention someone by typing their specific name as it appears in contacts, so if your friend is Eric and you want to mention Eric, you'd type in his name, wait for it to turn gray, and then tap it to turn the name into a mention. The person you're mentioning needs to be in the chat with you, of course.

Names that will function as mentions turn blue, so you know that the mention feature is working. Note that you can use @eric if you want to highlight someone's name, but the @ isn't necessary. It is, however, sometimes more convenient to use @ because it turns the name into a mention automatically without the need to tap on it.

With the mentions feature, you can mute noisy group chats but then activate a setting that alerts you when someone mentions your name, so you won't miss out on important bits of the conversation that are directed specifically at you. Go to Settings > Messages > Notify Me to get a notification when your name is mentioned in a muted conversation.

Apple's Memoji feature lets you create a custom avatar that resembles you or how you prefer to be seen. In iOS 14, Apple has added hew hairstyles, headwear, and age options so your Memoji can look more like you than ever before.

There are also masks so your Memoji can wear a mask as many of us are doing these days, and there are new Memoji stickers available to represent hugs, fist bumps, and blushing.

Macs have long had an emoji interface that includes a search option, and now iOS devices do too. When you tap on the Emoji or Globe button to bring up the emoji interface, there's now a search bar available where you can search through emoji by keyword to find exactly what you're looking for.

iOS 14 allows icons to be picked in a group chat in addition to a name, allowing for greater customization of your group conversations so you can tell them apart. Just open the info tab of any group conversation to customize it.

You can choose a custom photo, letter, Memoji, Animoji, or emoji to serve as an icon for a group chat, as well as customizing the background color for the icon.

Have questions about Messages, know of an iOS 14 feature we left out, or or want to offer feedback on this guide? Send us an email here.

Friday April 22, 2022 9:22 am PDT by Hartley Charlton
A leaked version of the European Union's Digital Markets Act (DMA) indicates that Apple could be forced to make major changes to the App Store, Messages, FaceTime, third-party browsers, and Siri. According to a leaked working document intended to reflect the "final" version of the DMA, seen by MacRumors, the EU is planning to enact changes that seek to have a significant impact on the way...
Read Full Article • 1237 comments

Friday January 7, 2022 12:59 am PST by Tim Hardwick
A recurring iOS bug that makes Apple's Messages app send read receipts despite the setting being disabled appears to be on the upswing again, based on reports from users running iOS 15. In iOS, with read receipts enabled (Settings -> Messages -> Send Read Receipts), the "Delivered" text that a person sees under an iMessage they have sent you turns to "Read" when you've viewed it in the...
Read Full Article • 103 comments

Monday November 22, 2021 12:44 pm PST by Juli Clover
Last Friday, code suggested Google would soon roll out an update for Google Messages that would display iMessage Reactions from iPhone users as emoji on Android devices, and now that update has started rolling out. Screenshots from 9to5Google reader Jvolkman According to 9to5Google, some Android users are beginning to see iMessage reactions in Google Messages as emoji that are linked to the...
Read Full Article • 41 comments

Friday November 19, 2021 10:46 am PST by Juli Clover
The Google Messages app on Android devices may soon start showing iMessage reactions as emoji characters instead of text, according to some digging done by 9to5Google. In the Messages app on iOS and Mac devices, users can add a reaction like a heart, thumbs up, thumbs down, a laugh, a question mark, or an exclamation, all of which show up as annotations to an iMessage. These reactions can...
Read Full Article • 102 comments

Tuesday July 21, 2020 6:18 am PDT by Tim Hardwick
Apple and Zendesk today made Business Chat generally available for all businesses that use Zendesk Support, over two years since the service first went into beta. First announced in 2018, Business Chat is designed to allow iPhone, iPad, and macOS users to communicate directly with businesses right within the Messages app. Users can chat with businesses, schedule appointments, and make...
Read Full Article • 20 comments

Monday June 22, 2020 10:40 am PDT by Joe Rossignol
Apple today announced several new features being added to iMessage in iOS 14, including mentions, pinned conversations, inline replies in conversations, group photos, and new Memoji styles and stickers. An overview of the new features:Mentions: Type a name to direct a message to someone. When you are mentioned, your name is highlighted. You can customize an active group so you only receive...
Read Full Article • 29 comments

Wednesday June 10, 2020 2:05 pm PDT by Arnold Kim
iOS 14 is expected in a matter of weeks at WWDC. Typically, we know very little concrete about an upcoming iOS version prior to the announcement, but this year there was a leak of an early build of iOS 14. That leak got into the hands of the developer community which has found a number of new features hidden in the code. Mockup of the new @ mention Messages feature in iOS 14 One of...
Read Full Article • 0 comments

Saturday May 2, 2020 11:38 am PDT by Hartley Charlton
The U.S. Patent and Trademark Office this week published a new Apple patent application that details features for editing sent messages, an improved application launcher and many other possible features. (via AppleInsider) The patent application specifically describes features of "a messaging user interface of a message application" that are not currently in iOS. These include ways to easily ...
Read Full Article • 143 comments

Monday March 9, 2020 7:46 pm PDT by Joe Rossignol
Apple is testing new iMessage features internally, according to information obtained by MacRumors. While these features could potentially arrive as early as iOS 14, they could be held back until a later software update or perhaps never released. For starters, there is a new Slack-like mention system that would allow users to tag other contacts with their name like @Joe or @Jane. When you type...
Read Full Article • 131 comments

Tuesday December 10, 2019 11:47 am PST by Joe Rossignol
In a new support document, Apple has indicated that iOS 13.3 includes improvements to further minimize junk messages in the Messages app. If you are trying to send a message to someone and you see an alert on your device that says the message was delivered as junk, Apple has provided some potential solutions to get around that:- Ask the person that you're trying to message to add your phone...
Read Full Article • 22 comments

Wednesday August 21, 2019 11:44 am PDT by Juli Clover
Samsung today debuted a bunch of GIFs that are meant to serve as comebacks for Android users who are maligned for their green text bubbles. As iPhone owners know, iMessages on an iPhone are denoted with a blue chat bubble, while SMS text messages from other devices such as Samsung devices are green. That lets iPhone users know who has an iPhone and who doesn't. iOS users often prefer...
Read Full Article • 233 comments