iOS 14 is now installed on 90 percent of iPhones that were introduced in the last four years, according to updated iOS 14 adoption rate numbers shared by Apple. 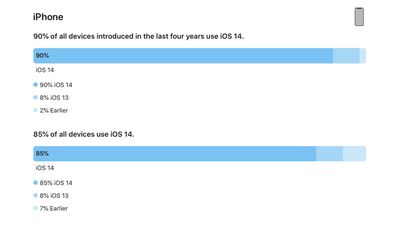 Eight percent of iPhones introduced in the last four years run iOS 13, while two percent continue to run an earlier version of iOS.

85 percent of all iPhones (including those older than four years) are running iOS 14, with eight percent still on iOS 13 and seven percent running an earlier version of iOS. This category includes devices that are not able to run iOS 14.

As for iPadOS, 91 percent of all iPads introduced in the last four years are running iPadOS 14, and 79 percent of all devices have the iOS 14 update installed. As with iPhones, iPads in the "all devices" category may not be able to run iOS 14, and indeed, 12 percent of tablets in this category have iOS 12 or earlier installed while nine percent run iOS 13.

Apple previously shared updated iOS 14 installation numbers in February. At that time, 86 percent of iPhones introduced in the last four years had iOS 14 installed, and 80 percent of all iPhones ran iOS 14, so iOS 14 adoption rates have seen decent growth with the release of iOS 14.5.

The updated iOS 14 adoption numbers come just ahead of the 32nd annual Worldwide Developers Conference, which will see the debut of iOS 15 and iPadOS 15. Apple's focus will shift from iOS 14 to ‌iOS 15‌ following WWDC, as the company will be refining and updating the new operating system ahead of its fall launch.

Adoniram
This is something Apple has consistently done right. My #1 gripe with Android (from way back in pre-iPhone 7 days) was the lack of software and feature updates. I felt lucky to get a single OS upgrade in 2-3 years, but never expected one (and usually never got one).
Score: 13 Votes (Like | Disagree)

Out of curiosity, what's the stat for Android?

Google used to publish version distribution stats for Android but it looks like that's no longer available to the public, just to developers.

Here's a peek at where things were in Feb.

What should I do with this information?

Fearlessly use the latest and greatest APIs when writing your Swift code
Score: 11 Votes (Like | Disagree)

techwhiz
It's kind of easy when you force adoption by not signing older versions of the software.
Score: 7 Votes (Like | Disagree)

old-school
I’d like to think that the reason they are publishing this now is because there is so much to announce on Monday that they need to dispense with this sort of routine update.
Score: 4 Votes (Like | Disagree)

Google used to publish version distribution stats for Android but it looks like that's no longer available to the public, just to developers.

Here's a peek at where things were in Feb.

Wednesday September 22, 2021 8:13 am PDT by Joe Rossignol
Apple released iOS 15 on Monday, and in the time since, the software update has reportedly seen lower adoption than iOS 14 following its launch last year. According to analytics company Mixpanel, around 8.5% of users installed iOS 15 as of Wednesday at 12:00 a.m. Eastern Time, compared to around 14.5% for iOS 14 as of midnight on the second day after that software update was released....
Read Full Article • 169 comments

Sunday June 26, 2022 7:36 am PDT by Joe Rossignol
iPhone 14 Pro models are widely expected to feature always-on displays that allow users to view glanceable information without having to tap to wake the screen. In the latest edition of his Power On newsletter for Bloomberg, Mark Gurman said the feature will include support for iOS 16's new Lock screen widgets for weather, fitness, and more. "Like the Apple Watch, the iPhone 14 Pro will be...
Read Full Article • 104 comments