Apple One: What You Need to Know

Apple in September announced Apple One, a new services bundle that allows Apple device customers to purchase several services together in one package instead of separately, saving money for those who use multiple Apple service products. Apple One launched on Friday, October 30th. 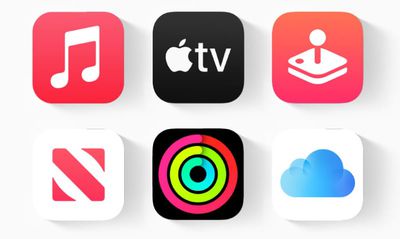 Our dedicated Apple One guide covers everything that you need to know about the Apple One bundles.

There are three Apple One bundle options to provide different levels of service access to customers at different price points.

For those who are unfamiliar with Apple's available service offerings, we've created a list with short descriptions of what each one features along with links where you can get more information before deciding whether to purchase a bundle.

The full access to the Family and the Premier plans can be shared between six family members, including the person who sets up the Bundle access.

Sharing subscriptions with multiple family members works through the Family Sharing feature available for Apple devices. Each person on the Family and Premier plans can sign into services with their own Apple ID through Family Sharing (which is also how it works with individual services) so all family members can get private access and personalized recommendations.

For Apple device users who continue to have multiple IDs split across iCloud services and iTunes/App Store purchases and subscriptions, Apple has a system in place to handle the dual Apple IDs within a single Apple One Bundle, with more information available through an Apple support document.

There is a free one-month trial available for the Apple One bundle, but there's a catch - you can only trial services where you haven't already had a free trial experience. You can't get a second free trial for Apple services that you have already experienced or subscribe to.

Apple One bundled services can be accessed on iPhone, iPad, iPod touch, Mac, Apple TV, HomePod, and Apple Watch. Apple One services are also available on non-Apple platforms depending on where support is available.

People who have separate Apple IDs for media and iCloud can use both accounts with Apple One, but there's option to stack the storage in the same way. In this situation, the ‌Apple One‌ storage plan replaces the current storage plan.

Apple One launched on Friday, October 30th. Fitness+, which is included in the Premier plan, will launch later this year.

Have questions about the Apple One bundles or want to offer feedback on this guide? Send us an email here.

Monday December 7, 2020 6:48 am PST by Hartley Charlton
Apple is positioning itself to launch a combined hardware and software subscription, according to Loup Ventures analysts. The report makes a compelling argument, based on a range of industry trends, aggregated data, and existing infrastructure, that Apple is in a prime position to launch an all-in-one hardware and software subscription. Similar to the iPhone upgrade program, we believe, ...
Read Full Article • 105 comments

Monday November 30, 2020 8:11 am PST by Joe Rossignol
Today marks one month since the launch of Apple One, which allows customers to subscribe to multiple Apple services in a single bundle, and it appears there are some billing-related issues as the free trial period begins to elapse. Apple One includes a 30-day free trial for any services that customers did not already subscribe to individually, and that trial period ends today for those who...
Read Full Article • 172 comments

Friday October 30, 2020 10:06 am PDT by Juli Clover
Through the Apple One subscription service that launched this morning, iCloud customers can get a maximum of 4TB of storage to use, up from the 2TB maximum available without an Apple One bundle. Customers who subscribe to an Apple One plan get 50GB, 200GB, or 2TB of storage included with the service based on the plan chosen, with 50GB provided for the $14.95 per month plan, 200GB supplied...
Read Full Article • 197 comments

Friday October 30, 2020 7:47 am PDT by Joe Rossignol
Apple One bundles are now available in the United States and over 100 other countries, allowing customers to subscribe to multiple Apple services through a single plan, including Apple Music, Apple TV+, Apple Arcade, iCloud, and more. To sign up for Apple One on an iPhone: Open Settings App Tap on Your Name at the top Tap on Subscriptions Tap on Apple One The prompt for Apple One...
Read Full Article • 605 comments

PSA: Apple One Premier Bundle Only Available in US, UK, Canada, and Australia

Friday October 30, 2020 2:39 am PDT by Tim Hardwick
Apple's new Apple One series of services bundles launches on Friday in over 100 countries and regions, but the top Premier tier will be limited to the United States, the United Kingdom, Australia, and Canada. The limited rollout of the $29.95 Premier tier is down to the fact that Apple News+ is currently only available in the above countries. Apple News+ is exclusive to the Premier tier,...
Read Full Article • 218 comments

Thursday October 29, 2020 1:39 pm PDT by Juli Clover
Apple in September announced Apple One, a new series of services bundles that will let Apple device customers purchase several services together in one package instead of separately, saving money for those who use multiple Apple service products. Ahead of Apple's earnings call, Apple CFO Luca Maestri told Bloomberg that Apple One is set to launch on Friday, October 30. Apple One Bundle...
Read Full Article • 152 comments

Thursday September 17, 2020 8:20 am PDT by Hartley Charlton
After Apple announced its Apple One service bundles at its "Time Flies" event earlier this week, there was uncertainty among some users with older Apple IDs about whether Apple One would work with multiple Apple IDs. Some users have two Apple IDs, often split between one for iCloud services and one for purchases and subscriptions. This is a result of the fact that the iTunes Store account...
Read Full Article • 128 comments

Tuesday September 15, 2020 12:26 pm PDT by Juli Clover
Apple today announced Apple One, a series of new subscription bundles that provide access to various Apple services at a combined monthly price. In response, Spotify sent out statements (via Peter Kafka) to the press decrying Apple's anti-competitive behavior and calling on "competition authorities" to stop Apple before it is able to cause "irreparable harm" to developers.Once again, Apple...
Read Full Article • 418 comments

Tuesday September 15, 2020 10:48 am PDT by Joe Rossignol
Apple today introduced new "Apple One" bundles for its services, which will allow customers to subscribe to Apple Music, Apple TV+, Apple Arcade, and more for one set monthly price, with the total cost being cheaper than subscribing to the services individually. There will be three tiers of Apple One available, including Individual, Family, and Premier: Individual: Apple Music, Apple TV+,...
Read Full Article • 321 comments

Saturday September 12, 2020 7:35 am PDT by Eric Slivka
Just a day after strings in Apple's own Apple Music app for Android suggested that the company's upcoming subscription bundle will indeed be called "Apple One," Apple acted to register a number of domain names for the term. The move further indicates that Apple One is likely to be the marketing name for the bundles rather than a placeholder. While Apple will likely not end up using many of...
Read Full Article • 105 comments

Thursday September 10, 2020 10:21 am PDT by Juli Clover
Apple is rumored to be working on a subscription services bundle called "Apple One," which could see a launch in the near future, according to code found in the Android version of Apple Music by 9to5Google. Signs of an "Apple One" bundle were found in the 3.4.0 beta of Apple Music for Android, confirming that Apple Music will be one component of the services bundle. From the Android app...
Read Full Article • 164 comments

Monday September 7, 2020 8:10 am PDT by Hartley Charlton
Apple has hired Tim Connolly, a Hollywood executive with experience at Disney, Hulu, and Quibi, for Apple TV, according to The Telegraph. Connolly was vice-president of digital distribution and new product development at Disney. He was one of the most senior executives at streaming startup Quibi, running partnerships and advertising, but he vacated the role before the video service...
Read Full Article • 75 comments

Thursday August 13, 2020 3:41 am PDT by Hartley Charlton
Apple will launch a new range of subscription service bundles called "Apple One" as soon as October, according to a new report by Bloomberg's Mark Gurman. The series of bundles would allow customers to subscribe to several Apple digital services together. This is expected to result in a lower monthly price than when the services are subscribed to individually. Bloomberg reports that the...
Read Full Article • 193 comments

Wednesday June 3, 2020 5:04 pm PDT by Juli Clover
Rumors have suggested Apple is working on a services bundle that will offer multiple Apple services like Apple TV+ and Apple Music for one flat monthly rate, and according to 9to5Mac, code found in iOS 13.5.5 seemingly confirms Apple's bundle plans. Files in iOS 13.5.5 reference a "bundle offer" and a "bundle subscription," and these files weren't in earlier versions of iOS. The files are...
Read Full Article • 82 comments

Monday October 7, 2019 8:35 am PDT by Joe Rossignol
Apple is in early discussions with record labels about bundling Apple Music and Apple TV+ as part of a "super-bundle of media content" for one flat monthly rate, according to a report from the Financial Times. While some record labels are said to be open to the idea, the report claims at least one big label has voiced concerns, adding that the industry is growing more wary about its...
Read Full Article • 107 comments