iOS 14, released for developers today, includes an interesting new Accessibility option that's designed to allow users to double tap or triple tap on the back of the iPhone to perform various actions. 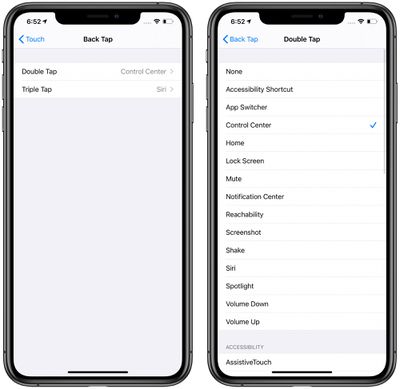 The feature can be used to do things like access Control Center, Notification Center, the Lock screen, the Home screen, or the App Switcher, or it can change the volume, bring up Siri, mute the ‌iPhone‌, take a screenshot, or access a Shortcut.

It can also be set up to work with a number of Accessibility features like Assistive Touch, Magnifier, or VoiceOver.

The Back Tap options can be accessed in the Settings app by tapping Accessibility > Touch > Back Tap. Tapping to trigger an action appears to work fairly well when the ‌iPhone‌'s back is tapped in any spot on the device with either the double tap or triple tap gesture.

Back Tap is just one of many new Accessibility features that Apple has built into iOS 14. VoiceOver has also received major improvements with support for image descriptions, text recognition, and screen recognition, as well as Headphone Accommodations that can amplify soft sounds and adjust certain frequencies for music, movies, phone calls, podcasts, and more.

tillsbury
Interesting... wonder if it works with a case on...
Score: 6 Votes (Like | Disagree)

gymnastboatman
FYI: This only works on models that support tap to wake. It is not available on my iPhone SE 2nd gen.
Score: 6 Votes (Like | Disagree)

Hal~9000
This seem’s like a fantastic trick for the large Pro Max iPhone in order to easily bring down Control Center when using the phone one handed. Just another feather in the cap of the great update that is iOS 14 ?
Score: 6 Votes (Like | Disagree)

rain111
Ok, I am mind-blown by this feature. thumbs up Apple ?
Score: 3 Votes (Like | Disagree)
Read All Comments