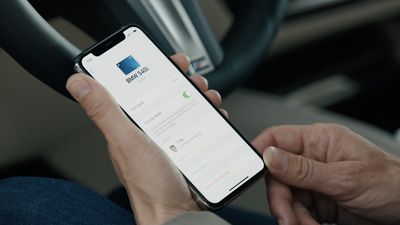 For peace of mind, a power reserve feature allows the digital car keys to work for up to five hours after your iPhone battery runs out.

Apple says the feature will start rolling out to BMW customers next month, with support for the new 2021 5 Series at launch, and Apple hopes to expand the feature to other automakers over time. Apple will also make the feature available on iOS 13, and presumably watchOS 6, so that users can take advantage of it as soon as possible.

Apple also announced that it is already working on the next generation of digital car keys based on Ultra Wideband technology, which will allow users to unlock future car models without removing their iPhone from their pocket or bag. Apple expects this feature, which will utilize the U1 chip in iPhone 11 models, to become available next year.

iOS 14 and watchOS 7 are available in beta for registered Apple developers today, with public betas to follow next month. The free software updates will be released in the fall for the iPhone 6s or Apple Watch Series 3 and newer.

Update: BMW has announced that Apple's digital car key feature will be supported on a wide range of its vehicle models manufactured after July 1, 2020. Compatible devices include the iPhone XS/XR or newer and the Apple Watch Series 5 or newer.

Hurrah my car got stolen because someone hacked my iPhone.
Thank Allah I don't drive because I can see this becoming a fun disaster :eek:

Most cars are stolen simply by towing them away. Works 100% of the time across all makes and models with no advance preparation.
Score: 6 Votes (Like | Disagree)

Most cars are stolen simply by towing them away. Works 100% of the time across all makes and models with no advance preparation.

Dashcam with a connection can share footage of the people and vehicle so police can catch them. GPS tracking helps recover the vehicle, too. Both standard on all Tesla vehicles.
Score: 3 Votes (Like | Disagree)

psiddy
Great...now you've pissed off the Benz, Audi, Porsche owners! Including me.
Score: 1 Votes (Like | Disagree)

Shame that this will be restricted to iOS devices and isn't cross-platform like Tesla's implementation.

Dashcam with a connection can share footage of the people and vehicle so police can catch them. GPS tracking helps recover the vehicle, too. Both standard on all Tesla vehicles.

GPS and cell jammers. Easily handheld. Once you tow it somewhere quiet, pop the hood and disconnect the battery, pull the fuses, or disconnect the antennas.

OnStar is standard for over a decade, and has been around a lot longer than Tesla.

Article explaining this from 10 years ago: https://www.theguardian.com/technology/2010/feb/22/car-thieves-using-gps-jammers
Score: 1 Votes (Like | Disagree)
Read All Comments