iOS 14: How to Use Picture in Picture Mode on iPhone

With iOS 13, Apple added a Picture in Picture Mode to the iPad, and with iOS 14, that Picture in Picture functionality is available for the iPhone too, letting users do things like watch videos and take FaceTime calls while doing other things on their device.

This guide covers everything that you need to know about using Picture in Picture on the ‌iPhone‌.

Using Picture in Picture With Apps

Picture in Picture works with apps that play video content, but when it comes to third-party apps, app developers have to implement support for the feature. 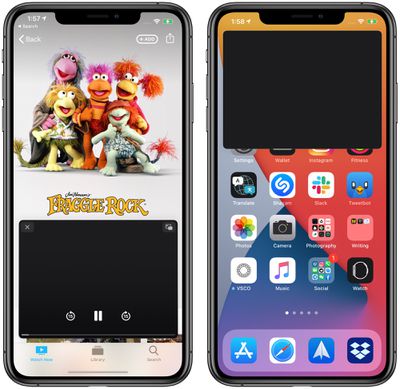 Picture in Picture mode controls for apps that play television and movie content include play/pause and an option to tap to skip 15 seconds forward and 15 seconds back.

Apple's apps that work with Picture in Picture include anything with a video feed, such as Apple TV+ or video footage from HomeKit-enabled cameras in the Home app.

YouTube, unfortunately, has not implemented Picture in Picture support yet, so the YouTube app doesn't work with the feature. There are some doubts that YouTube will ever support this feature, but YouTube has been testing it on the ‌iPad‌. Fortunately, there is a workaround for now, using YouTube on the web.

Using Picture in Picture on the Web

Note that to use Picture in Picture mode with Safari, if you want to continue browsing another website while a video plays, you need to open a new Safari tab.

Using Picture in Picture with FaceTime

Picture in Picture works with ‌FaceTime‌ in iOS 14, and that's perhaps the most useful way to take advantage of it. In iOS 13, if you need to do something on your phone, you have to swipe out of the ‌FaceTime‌ window, which pauses your video for the person you're speaking with.

In iOS 14, if you swipe out of a ‌FaceTime‌ call it automatically minimizes into a Picture in Picture window that continues to be visible even while you access other apps so you and the other person you're talking to can continue your conversation without the ‌iPhone‌ being otherwise unusable.

The small window is about the size of two app icons, the medium is as wide as about three app icons and as tall as one and a half, while the largest window is the size of eight app icons.

All of the windows are shown in a landscape orientation on the ‌iPhone‌'s Home Screen with the exception of ‌FaceTime‌, which is shown in portrait mode.

Moving the Picture in Picture Window Off Screen

You can pull a Picture in Picture window of any size over to the side of the ‌iPhone‌ with drag and drop gestures, moving it off of the screen.

With the Picture in Picture window off screen, you will continue to hear the audio from the video or ‌FaceTime‌ call, but it won't be visible on the ‌iPhone‌'s display.

Have questions about the Picture in Picture mode on the ‌iPhone‌, know of a feature we left out, or want to offer feedback on this guide? Send us an email here.

BulkSlash
Not to be that guy, but picture-in-picture has been available on the iPad since iOS 9 not iOS 13. I‘m pleased we’re finally getting it on iPhone.

I’ve now deleted the YouTube app and am just using the website because you can do picture-in-picture with that. It even seems to support auto-playing the next video so you don’t have to keep switching back to Safari to start the next video, which is really good.
Score: 10 Votes (Like | Disagree)

Rogifan
Apple needs to mandate that video apps support PIP. It’s ridiculous that Google doesn’t have to support an OS feature because they want to charge you for it.
Score: 9 Votes (Like | Disagree)

Actually Video overlay, can two videos be played at once?

Hope they introduce the corresponding feature for people on the other end -- Auto Disconnect if more than one thing is showing on the other person's phone!

Just what we need. Calling someone up and they're watching a video, playing a game, and saying "Uh-huh", "uh-huh" every now and then!

No, thank you! It'll be as bad as people who put you on hold to take the other call!

All of the responders to your post are busy assisting other forum members. Your post is very important to us. Please remain on MacRumors constantly refreshing the page and someone will be with you shortly. We appreciate your patience and thank you for choosing MacRumors.
Score: 6 Votes (Like | Disagree)

Apple_Robert
This works the same on iPadOS. I have used the feature more than I thought I would on my iPad Pro. My SE is too small for such a feature to be practical.
Score: 5 Votes (Like | Disagree)

This works the same on iPadOS. I have used the feature more than I thought I would on my iPad Pro. My SE is too small for such a feature to be practical.

Yeah, makes more sense on the iPad's larger display, but it's especially handy for FaceTime on all devices.
Score: 4 Votes (Like | Disagree)
Read All Comments

Monday May 16, 2022 10:10 am PDT by Juli Clover
Apple today released macOS Monterey 12.4, the fourth major update to the macOS Monterey operating system that launched in October 2021. macOS Monterey 12.4 comes over two months after the launch of macOS Monterey 12.3, an update that added Universal Control. The ‌‌‌‌‌macOS Monterey‌‌ 12.4 update can be downloaded on all eligible Macs using the Software Update section of System...
Read Full Article • 121 comments