iOS 14: How to Send an Audio Message Using Siri

In iOS 14, Apple pared down the Siri interface so that it no longer takes over the whole of your iPhone's screen when you issue a voice command or query. Instead, a small ‌Siri‌ orb pops up at the bottom of the screen without obscuring what you're looking at. 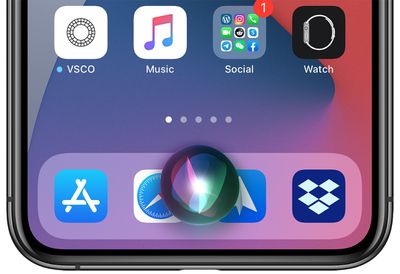 It's not just the interface that's been improved, though. ‌Siri‌ also picked up several new features, one of which is the ability to record and send audio messages to contacts.

When you send an audio message using the audio interface in the Messages app, the record audio option only appears when the intended recipient is an iMessage user. But ‌Siri‌ can also send audio messages to Android phones. The following steps show you how it's done.

If you open the Messages app, you should see the recording show up in a conversation thread, indicating it's been sent.

Note that audio messages are automatically deleted after a couple of minutes unless they're saved, but you can change this default behavior and keep them permanently: In the Settings app, select Messages -> Expire -> Never.

For more details on iOS 14's new compact interface and communication features, be sure to check out our iOS 14 roundup.

Threbus
I wish that when you describe something that's coming up in an as yet unreleased version of the OS, you wouldn't use the past tense when describing it, as if it's available to everyone. Yes, it's done for people with the betas, but for the rest of us, just say something like, "In the upcoming release, Apple is reducing the size of…" and then go on to describe the feature.
Score: 4 Votes (Like | Disagree)

I was too until I realized you can’t use anything underneath the Siri UI when it’s up.

Absolutely terrible terrible decision. Why would they make it transparent and out of the way, but then still require you to dismiss or interact with it?
Score: 4 Votes (Like | Disagree)

I'm still really glad that Siri isn't so obtrusive now. All of the tweaks I tried that attempted to fix it while jailbroken never worked well.

I was too until I realized you can’t use anything underneath the Siri UI when it’s up.
Score: 3 Votes (Like | Disagree)

benshive
I'm still really glad that Siri isn't so obtrusive now. All of the tweaks I tried that attempted to fix it while jailbroken never worked well.
Score: 2 Votes (Like | Disagree)

Of course in typical apple fashion, they went from too much to not enough. Now its too small.

really? i think it's about perfect.
Score: 1 Votes (Like | Disagree)

S G
"4. To end the audio message, simply stop speaking for a few seconds, and Siri will recognize that you're finished."

That's an issue in general with Siri when dictating something that requires thought and pauses are needed...
Score: 1 Votes (Like | Disagree)
Read All Comments

18 hours ago by Joe Rossignol