iOS 14 introduces several compact user interface elements that iPhone users have been requesting for years, such as a minimized phone call pop up that doesn't take over the entire screen and a smaller Siri window that doesn't dominate the display. 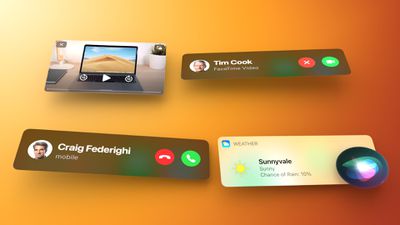 This guide covers all of the new compact UI elements that Apple has added, but for more details on iOS 14 design changes, make sure to check out our Home Screen guide and our full iOS 14 roundup.

When you're in the middle of using your ‌iPhone‌ and a phone call comes in, it's frustrating to have the incoming call take over the ‌iPhone‌'s display, especially if it's a spam call that you don't care about.

Phone calls are only shown in banner format when your phone is unlocked and in use, so when your ‌iPhone‌ is locked, the Lock Screen interface where with the slide to unlock bar is still present.

You can tap on the decline button of incoming phone call banner to decline the call right away. Tapping on the accept button activates the call right in the banner interface, but if you tap outside of the accept/reject buttons the call opens in full screen as normal. If you swipe the banner away, you can continue to use your ‌iPhone‌ as normal while the phone rings in the background with a small icon shown over the time at the top left of the display.

If you tap a phone call banner and open the full display interface, you'll need to accept or decline the call to get out of the phone call view. If you've swiped the banner away, you can tap on the call icon in the upper left corner of the display to get to the call interface.

Incoming FaceTime calls in iOS 14 look the same as incoming phone calls when the ‌iPhone‌ is in use, showing up as a banner that can be swiped away or tapped to accept or decline a call. Note that ‌FaceTime‌ calls only show up in banner format when the ‌iPhone‌ is unlocked and in use. On the Lock Screen, ‌FaceTime‌ calls continue to take up the whole screen and will activate the camera.

Apple created a new API for the collapsed call interface that will let developers incorporate the feature into third-party VOIP apps like Facebook Messenger, WhatsApp, Skype, and tons more.

App developers will need to implement this API into their apps before their apps will be shown with the updated call interface.

‌Siri‌ requests in iOS 14 are also part of the compact interface, and activating ‌Siri‌ no longer takes over the entire ‌iPhone‌. Instead, when you activate ‌Siri‌ through a "Hey ‌Siri‌" voice command or through a physical button, a circular, animated ‌Siri‌ icon pops up at the bottom of the ‌iPhone‌'s display.

The ‌Siri‌ icon moves as you speak to ‌Siri‌ so you can be sure the voice assistant is listening and picking up what you have to say. Queries are also displayed in a more compact view with information provided at the top in a banner format.

If, for example, you ask ‌Siri‌ the time or the weather, the information is shown in a banner-style popup at the top of the display.

Shorter information is shown in smaller banners, but longer questions may have banners that take up more space. This is especially true of results that involve web searches.

Certain requests, such as those that show off ‌Siri‌'s personality like jokes or product information requests, show the results right above the ‌Siri‌ icon.

Note that in iOS 14, ‌Siri‌ does not display the text of what you've spoken in order to keep the interface as small as possible, but if you enable the "Always Show Speech" feature, what you're speaking will show up in a small popup over the ‌Siri‌ icon. It's useful to see what ‌Siri‌ hears to make sure the voice assistant is properly interpreting commands.

Turn on "Always Show Speech" by opening up Settings, going to ‌Siri‌ & Search, tapping on ‌Siri‌ Feedback and then toggling on the speech option. You can also turn on captions, which will show captions for all spoken text.

After activating ‌Siri‌ the first time with a voice command or a physical button, the ‌Siri‌ interface stays open until you tap out of it, so you can tap on the ‌Siri‌ icon to initiate another ‌Siri‌ request. With ‌Siri‌ results that are interactive like web search results or translations, you can tap in the ‌Siri‌ window to execute the search, hear the spoken translation, and more. All in all, ‌Siri‌ in iOS 14 works much the same as it does in iOS 13, but in a way that feels like it's less of an interruption to general ‌iPhone‌ and iPad usage.

Along with the redesign, ‌Siri‌ has a few other new features in iOS 14 such as support for sending audio messages, getting cycling directions, and sharing an Apple Maps ETA with a contact, with how tos covering these new features available below.

Have questions about the interface changes in iOS 14, know of a feature we left out, or want to offer feedback on this guide? Send us an email here. For more on everything new in iOS 14, make sure to check out our iOS 14 roundup and our other iOS 14 guides.

Phone calls need a ghost button. So, people don't get dumped straight to voicemail but the ringing and any notification goes away.

Swiping away the new incoming call notification/banner basically does that -- that's essentially one of the bigger changes that is in iOS 14 in regards to calls.
Score: 18 Votes (Like | Disagree)

Wouldn’t those incoming call alerts be better placed at the bottom of the screen?

While the Siri results would be better placed at the top, since they don’t require interaction by touch.

I don't think so; imagine you're using the keyboard when you get a call and accidentally accept when you go to press a key.
Score: 18 Votes (Like | Disagree)

simonmet
Wouldn’t those incoming call alerts be better placed at the bottom of the screen?

While the Siri results would be better placed at the top, since they don’t require interaction by touch.
Score: 8 Votes (Like | Disagree)

velocityg4
Phone calls need a ghost button. So, people don't get dumped straight to voicemail but the ringing and any notification goes away.

Okay, but can they give me an interface that answers a call the first time I swipe or press the green "answer" button rather than having to do it 5-10 times and sometimes having it never register?

I don't think so; imagine you're using the keyboard when you get a call and accidentally accept when you go to press a key.

Ah good point. I didn’t think about that.
Score: 4 Votes (Like | Disagree)
Read All Comments