Apple told some developers that it will delay the enforcement of an anti-tracking feature that's being implemented in iOS 14, reports The Information. 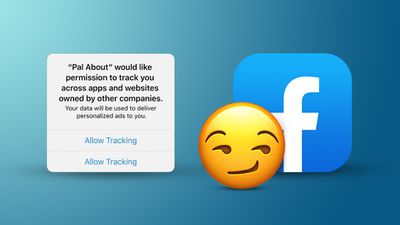 In iOS 14, Apple is requiring apps to seek customer consent before the IDFA (Identifier for Advertisers) can be used to track user behavior and preference across apps and websites for ad targeting purposes.

Major app developers and ad networks like Facebook have spoken out against the feature, with Facebook warning advertisers on its platform that the new feature could cause a more than 50 percent drop in Audience Network publisher revenue due to the loss of personalization from ads within apps.

Facebook and other advertisers expect that customers will not want to share their IDFA's for ad targeting purposes and will therefore decline consent for the ad blocking popups that Apple has implemented in iOS 14.

Mobile developers that spoke to The Information said that they've had little time to prepare for Apple's change, which was announced in June alongside iOS 14. Apple has also not provided a way for them to target ads without using the IDFA.

If Apple does end up delaying the anti-tracking features in iOS 14, customers who upgrade to iOS 14 will not see the prompts to decline sharing their device IDFA with third-party apps.

According to The Information, if Apple does decide to delay, the anti-tracking features could be held until next year.

Eric Seufert, an ads industry analyst, said it "simply wasn't possible for developers to adapt their advertising infrastructure" to Apple's proposed IDFA change in time for the public release of iOS 14, which Apple usually makes available in September. He called delaying enforcement of the new IDFA prompt "the right thing for Apple to do, even if those privacy restrictions are well intentioned and ultimately best for consumers."

Apple's App Store team has apparently been asking gaming firms for details on how the change might impact their businesses, as these kinds of targeted ads are important to free-to-play games, and their responses may determine Apple's plan to implement or delay the feature.

Update 10:02 a.m.: In a statement to TechCrunch, Apple confirms that it is pushing back the change to "early next year."

We believe technology should protect users’ fundamental right to privacy, and that means giving users tools to understand which apps and websites may be sharing their data with other companies for advertising or advertising measurement purposes, as well as the tools to revoke permission for this tracking. When enabled, a system prompt will give users the ability to allow or reject that tracking on an app-by-app basis. We want to give developers the time they need to make the necessary changes, and as a result, the requirement to use this tracking permission will go into effect early next year.

Wowfunhappy
This is the one situation where Apple caves? The time when it doesn't benefit their actual customers at all?
Score: 71 Votes (Like | Disagree)

dmx
This delay is/would be absolutely unacceptable. If Apple is on the consumer’s side, and supports the right to privacy, they need to follow through with their plan and give users the choice to not allow their identifier to be used for tracking.
Score: 70 Votes (Like | Disagree)

TomMcIn
I buy and use Apple Products for my benefit, NOT the benefit of a bunch of carpetbaggers that just want information about my activities. Install this protection as planned.
Score: 45 Votes (Like | Disagree)

rp2011
Oh mannn. Why?
Terrible terrible news if they decide to cop out. They would lose respect from me if that’s the case..
Score: 34 Votes (Like | Disagree)
Read All Comments