Apple today released iOS 14.6 and iPadOS 14.6 to the public. The iOS 14.6 update isn't quite as significant as the iOS 14.5 update that preceded it, but it still introduces a number of notable new features. We've highlighted everything that's new in iOS and iPadOS 14.6 below. 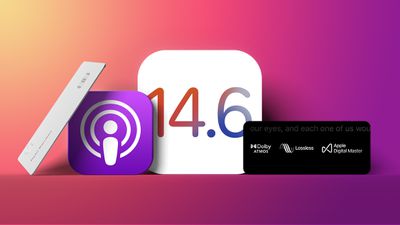 Apple in May introduced two new Apple Music features, which ‌Apple Music‌ subscribers are getting for no additional cost. ‌Apple Music‌ Spatial Audio with Dolby Atmos will offer up an immersive, multi-dimensional audio experience that lets artists mix music in a way that makes it sound like the notes are coming from all around you.

Apple is also upgrading its entire music catalog to Lossless Audio, which preserves the details in the original audio file so ‌Apple Music‌ subscribers can hear songs exactly as artists recorded them in the studio.

Neither of these two features are launching with iOS 14.6 and Apple plans to enable them in June through a server-side update, but iOS 14.6 does lay the groundwork.

More about these new features can be found in our Apple Music guide and our dedicated Apple Music Lossless guide.

Announced in April, Apple Card Family is designed to allow an Apple card to be shared among family members. Two adults in a family can share a single ‌Apple Card‌ account, with each person serving as a co-owner to build credit.

‌Apple Card‌ Family also lets parents share an ‌Apple Card‌ with their children for making purchases, with optional spending limits and parental controls to help children learn smart financial habits. All spending by the family is tracked with a single monthly bill.

Up to five people can be added to an ‌Apple Card‌ account for sharing purposes, with sharing handled through the Wallet app. All users must be part of the same Family Sharing Group, and be 13 years of age or older.

Co-owners must be 18 years or older, and will have a combined spending limit and the ability to see each other's spending. Existing ‌Apple Card‌ customers will be able to merge their ‌Apple Card‌ accounts if they have two cards, resulting in a higher shared credit limit with the lower APR of the two accounts, but this feature won't be available until July. Adding new family members or adding a co-owner to an ‌Apple Card‌ can be done through the Wallet app, and Apple has provided tutorials.

iOS 14.6 introduces support for subscriptions in the Apple Podcasts app, allowing podcast creators to collect subscription fees from their listeners.

AirTag and Find My

In the Find My app, if you put an AirTag or a ‌Find My‌ accessory into Lost Mode, you can now add an email address for contact purposes. Prior to iOS 14.6, the only option was to enter a phone number.

AirTags will also now show a partially masked phone number of an owner when tapped with an NFC-compatible device.

iPhone users with the Voice Control accessibility option enabled can unlock their iPhones for the first time after a restart using only their voice after installing iOS 14.6.

There are a number of bug fixes that are included in iOS 14.6, with Apple fixing issues that include the Apple Watch not working to unlock the ‌iPhone‌, disconnecting Bluetooth devices, and performance issues during startup. A full list of bug fixes is below:

On the Apple lossless front, I wonder if there are any changes to iTunes Match.
Have not heard it mentioned post announcement but it would be interesting if Match now upgraded tracks to lossless rather than 256Kbs AAC.
At least me and the other 3 Match users in the world would be super happy with that anyway.

Squuiid
On the Apple lossless front, I wonder if there are any changes to iTunes Match.
Have not heard it mentioned post announcement but it would be interesting if Match now upgraded tracks to lossless rather than 256Kbs AAC.
At least me and the other 3 Match users in the world would be super happy with that anyway.
Score: 18 Votes (Like | Disagree)

teknikal90
I tried double blind abx tests between 256kbps vbr AAC vs direct CD lossless rip back in the day when I was super into audio gear and could not reliably tell which is the “better” rip.

I really doubt even the most discerning 10% of people in this technical forum could appreciate the difference.
Score: 16 Votes (Like | Disagree)

ignatius345
I couldn't really care less about Lossless, to be honest and I'm very much over all this obsessing about it on this website. People do realize that we're talking about the tippy top tier of audible difference, right? It's absolutely not going to be detectable in many listening situations -- and even then, more for people who really want to actively listen for it with trained ears and high-end headphones or loudspeakers. No shade to people who are legitimately into high end audio -- more power to you. But I think a lot of casual music listeners are suddenly obsessing over Lossless just because they heard it's better and they have to have it.

What I want to know more about is spatial audio -- which tracks have it, whether it gets incorporated somehow into "legacy" tracks. That is a feature that would make me consider switching from Spotify. The limited amount I've used it on my AirPods Max, it's a really immersive, cool experience.
Score: 10 Votes (Like | Disagree)

anthogag
Apple needs to make a 'lossless' lightning-to-lightning cable for the Air Pods Max to iPhone connection if it would work.
Score: 6 Votes (Like | Disagree)

19 hours ago by Joe Rossignol