After the success of the HomePod mini, Apple is reportedly mulling over offering a new, mid-range HomePod model that would sit between the original ‌HomePod‌ and the ‌HomePod mini‌. 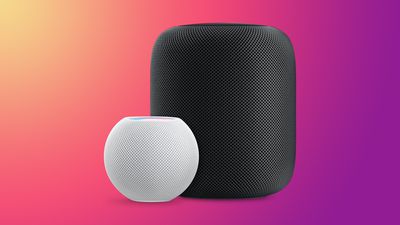 According to Bloomberg's Mark Gurman and Debby Wu, Apple may choose to offer a third ‌HomePod‌ model to sit in the middle of both of the existing offerings:

Apple has also internally weighed a new ‌HomePod‌ that sits in size, price, and sound quality between the original $299 ‌HomePod‌ and the $99 ‌HomePod mini‌. It's unclear if Apple will ultimately launch that product or just further cut the price of the higher-end version.

Apple slashed the price of the original ‌HomePod‌ from $349 to $299 less than two years after its 2017 launch, so another price drop to bring the larger smart speaker into the mid-range is not inconceivable.

With a $200 price difference and significant disparity between the two existing ‌HomePod‌ models in terms of audio technologies, a third ‌HomePod‌ model has the range to set itself apart, with some of the higher-end audio hardware of the larger model in a smaller form factor.

Bloomberg's report appears to suggest that these internal discussions are still at an early stage, so it may yet be some time before we see a third ‌HomePod‌ model emerge, if at all.

Tuesday October 20, 2020 10:20 am PDT by Juli Clover
Alongside iOS and iPadOS 14.1, Apple today released new 14.1 software for the HomePod, which includes a number of new updates such as support for the Intercom feature that allows you to speak to anyone in the home on iPhone, iPad, HomePod, and more. The update also introduces support for the HomePod mini that's launching in November and it adds new Siri features. Siri is able to stop alarms, ...
Read Full Article • 131 comments

Tuesday October 13, 2020 10:05 am PDT by Hartley Charlton
Apple today announced the HomePod mini with a new spherical design and the S5 chip at its "Hi, Speed" event. The device is the first addition to the HomePod product lineup since the launch of the original HomePod, and is much smaller at just 3.3-inches tall, as opposed to the original's 6.8-inches, and looks substantially different with a new spherical design. Following in the footsteps of ...
Read Full Article • 236 comments

Tuesday January 26, 2021 1:25 pm PST by Juli Clover
Apple today released iOS 14.4 and the HomePod 14.4 software, with these two updates introducing improved Handoff functionality between the HomePod mini and the iPhone 11 and iPhone 12 models. In our latest YouTube video, we tested out the new functionality to see just how it works. Subscribe to the MacRumors YouTube channel for more videos. The HomePod mini, the iPhone 11 models, and the...
Read Full Article • 58 comments