How to Set Up Temperature and Humidity Automations on HomePod

In late January 2023, Apple released a HomePod 16.3 software update that adds humidity and temperature sensing to the second-generation HomePod and all HomePod mini models. This article explains how the features work and what you can do with them. 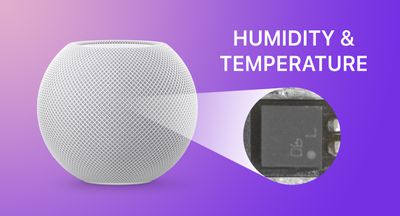 Apple's new second-generation ‌HomePod‌ features temperature and humidity sensors that can be used to measure the indoor climate. But that's not all. The new 16.3 ‌HomePod‌ software allows you to run automations based on these measurements.

Below, we show you how the temperature and humidity sensor information appears in the Home app, and how you can add automations. In our example, after having installed the 16.3 software on a ‌HomePod mini‌, we run through the steps needed to activate a thermostat to heat a room whenever it falls below 66.2 degrees Fahrenheit (19 degrees Celsius).

Our automation is now ready to activate the thermostat to heat the room whenever the temperature drops below the specified measurement. To complement the automation, we could create an additional one that turns off the thermostat when the room reaches a certain temperature.

This is just one example of some of the new features available with the ‌HomePod‌ 16.3 software update. The update also brings users the ability to add remastered ambient sounds to scenes, automations, and alarms, as well as the ability to use Siri to set recurring automations and find people who are in your Find My contacts.

They have a temperature sensor right next to a CPU?

It actually at the base, well away from the CPU: https://www.techhive.com/article/579285/the-homepod-mini-reportedly-has-a-secret-temperature-sensor.html
Score: 8 Votes (Like | Disagree)

eh, just use a smart thermostat.

Or a dumb thermostat. Setting a target temperature is literally what they do.

There's no need to set it when the temperature drops. Just set the minimum temperature and it'll activate when needed. If it's warmer, it will turn off on its own.

So what's the benefit of this complicated automation?
I mean, how often will it even activate? Only once, I guess. Because once the thermostat is set to 22°, it will stay that warm permanently, and it will never trigger again.
Score: 7 Votes (Like | Disagree)

Will Co
You should also know that the HomeKit protocol, and in particular the conditional rules that are supported, is actually far richer and expansive than the functionality surfaced within the native Home app. For example, within the Home app, you cannot configure a rule that says "At Sunrise, turn on this water feature, but only if the temperature of my garden sensor is > 3 degC". There are similar looking things that come close, which you can create, but not one with that specific conditional structure. If you look at some of the third party apps available there is a heck of a lot more you can do with your HomeKit accessories. For example, using some of the tools you can configure more complex rules, such as the one above, and weirdly they will be displayed correctly by the Home app, although you cannot edit them. You would have thought that Apple, having defined the entire HomeKit protocol, would have created a UI that surfaces all of it. Seems that the UI team are still playing catch up with the rest of the HomeKit system.
Score: 6 Votes (Like | Disagree)

Or a dumb thermostat. Setting a target temperature is literally what they do.

There's no need to set it when the temperature drops. Just set the minimum temperature and it'll activate when needed. If it's warmer, it will turn off on its own.

So what's the benefit of this complicated automation?
I mean, how often will it even activate? Only once, I guess. Because once the thermostat is set to 22°, it will stay that warm permanently, and it will never trigger again.

the 'target' temperature is not always fixed. scheduling? different temps time of day? temps based on weather?

it's really not that complicated.
Score: 6 Votes (Like | Disagree)

So what's the benefit of this complicated automation?
I mean, how often will it even activate? Only once, I guess. Because once the thermostat is set to 22°, it will stay that warm permanently, and it will never trigger again.

Presumably would have another one to turn it down once it hits a certain point, but yeah...could just use a regular thermostat. But... most people's thermostat is only one central location. They could put the HomePod in a room that gets colder quicker and use it to call for heat.

Also, let's not limit ourselves to thermostats. This could be used to shut the blinds when it starts getting warm, or to turn on some fans to move the air around.
Score: 5 Votes (Like | Disagree)

Tuesday January 24, 2023 1:11 pm PST by Joe Rossignol
While the new Mac mini with the M2 chip has a lower $599 starting price, the base model with 256GB of storage has slower SSD read and write speeds compared to the previous-generation model with the M1 chip and 256GB of storage. A teardown of the new Mac mini shared by YouTube channel Brandon Geekabit reveals that the 256GB model is equipped with only a single 256GB storage chip, while the...
Read Full Article • 572 comments

20 hours ago by Juli Clover