Apple on Tuesday released an iOS 14.3 update for HomePod and HomePod mini, which Apple's release notes said included "general performance and stability improvements," but it actually failed to mention a new feature that allows the head of a household to assign primary users to different HomePods in the same home. 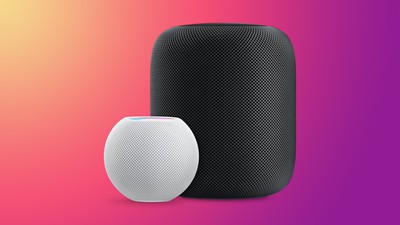 ‌HomePod‌ can automatically recognize voices to personalize music requests, playlists, and recommendations. However, Apple acknowledges that Siri may not always recognize individual voices. Therefore, the new feature allows you to assign a primary user for each ‌HomePod‌, and when ‌Siri‌ fails to recognize the voice of a user, that ‌HomePod‌ will fall back to the primary user to which it has been assigned and carry out the request. Here's how to access the feature and set it up.

The feature appears to have been added because Apple recognizes that some homes will have multiple HomePods located in different rooms, some in which particular users may reside more than others – such as in a private bedroom, for example. In other words, if ‌Siri‌ fails to recognize their voice, it can still process their personal request.

The new feature in iOS 14.3 was originally spotted by The 8-bit.

I have eight HomePods, and they hadn't worked properly in several months, particularly when iOS 14 trashed everything. I ended up removing them all after countless attempts to use the Apple preferred way. While not as good as the HomePods, I picked up a few nest speakers, and they work flawlessly. Yeah, I don't have the whole ecosystem, but in my opinion, Apple has lost some of that advantage due in no small measure to their inability to get their software to work. I was hopeful after installing iOS 14.3, things would calm down and solve some issues. Well, it did allow me to use Contacts and Messages again, but that's about it.

The silver lining is that the iPhone 12 Max and Apple Watch seem to work very well, so there's that.

Weird, we have 4, two regular, two mini's. Haven't had much if any issues before or after iOS 14.
Score: 3 Votes (Like | Disagree)

Digital Dude
I have eight HomePods, and they hadn't worked properly in several months, particularly when iOS 14 trashed everything. I ended up removing them all after countless attempts to use the Apple preferred way. While not as good as the HomePods, I picked up a few nest speakers, and they work flawlessly. Yeah, I don't have the whole ecosystem, but in my opinion, Apple has lost some of that advantage due in no small measure to their inability to get their software to work. I was hopeful after installing iOS 14.3, things would calm down and solve some issues. Well, it did allow me to use Contacts and Messages again, but that's about it.

The silver lining is that the iPhone 12 Max and Apple Watch seem to work very well, so there's that.
Score: 2 Votes (Like | Disagree)

Is there a way to give access to a homepod without giving access to all the other devices? I would like to pick up Minis over time for my daughters but I dont want them to have access to every device in the house.

So they can’t play music. I never heard of that need before. If it is to restrict purchases. Set the require password setting
Score: 1 Votes (Like | Disagree)

whyamihere
Meanwhile my Homepod still refuses to even recognize different voices at all. Every few months I get the itch to give it another try and go through all the Apple and various 3rd party site suggested troubleshooting steps to get it working. And every time it ends in the same disappointing inability to recognize different voices. Literally the definition of insanity at this point.
Score: 1 Votes (Like | Disagree)

I’m confused what this update enables, and the article doesn’t do a great job explaining it. This is for limiting users or giving more people access? As it stands the HomePod already responds to everyone?

Prior to this update, every HomePod had the owner of the home as the primary user. In our house that is me. So, I was the primary user of the HomePod Mini that our son has in his bedroom, and if he asked it to play music then it would play from my library unless his voice was recognised. In fairness, it quite reliably recognised his voice but, for example, if he had a friend round then that persons voice wouldn't be recognised and any request from that person would default to my account.

Now I have been able to designate him as the primary user of that HomePod, meaning that this issue is solved.

It is very useful for us, as we have a couple of Homepods with this situation.
Score: 1 Votes (Like | Disagree)

Kebabselector
I would be nice if you could tune the sound rather than be stuck with only using Airplay for that.
Score: 1 Votes (Like | Disagree)
Read All Comments

Tuesday April 13, 2021 9:04 am PDT by Juli Clover
Following an overnight leak by Siri, Apple today officially announced that it will be holding a special "Spring Loaded" event on Tuesday, April 20 at 10:00 a.m. Pacific Time at the Steve Jobs Theater on the Apple Park campus in Cupertino, California. As with all of Apple's 2020 events, the April 2021 event will be a digital-only gathering with no members of the media invited to attend in...
Read Full Article • 263 comments

Monday April 12, 2021 3:32 am PDT by Tim Hardwick
Apple is working on a combined Apple TV with HomePod speaker that has a camera for video calls through a connected television set, according to Bloomberg's Mark Gurman. From the report: The company is working on a product that would combine an Apple TV set-top box with a HomePod speaker and include a camera for video conferencing through a connected TV and other smart-home functions,...
Read Full Article • 181 comments