How to Ask Siri on HomePod to Play Apple Music Playlists, Genres, Moods, and More

One of the main uses for Siri on HomePod is to control your Apple Music collection. There are ‌Siri‌ voice commands for accessing content like playlists, genres, moods, liking or disliking songs, playing more music based on something you've heard, starting a new radio station, and much more.

Because the list of ‌Siri‌ commands is so extensive, this guide won't be covering every possible option and genre supported by available through ‌Siri‌, but it should serve as a good starting point when getting to know what exactly your ‌HomePod‌ can do with your ‌Apple Music‌ library.

Your playlists may be the content you'll interact with most often in ‌Apple Music‌, and ‌Siri‌ on ‌HomePod‌ can play any ‌Apple Music‌ playlist you've made in the past on an iOS device or Mac. ‌Siri‌ can also play ‌Apple Music‌'s personally curated mix playlists. 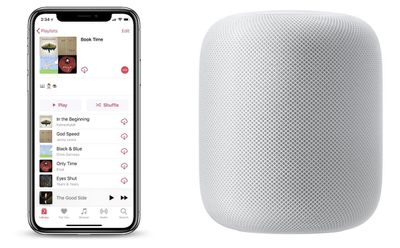 ‌Siri‌ can understand a wide range of commands requesting various musical genres and moods found in ‌Apple Music‌. You can find some of these moods in ‌Apple Music‌ itself by navigating to the Browse tab, tapping Playlists, then looking through all of the Activities and Moods. You can also request songs based on decades, specific years, and exact dates. We've compiled a few examples below to get you started.

Here are some examples of more keywords that you could enter into the above commands:

You'll also find the same results for essentially every genre, like Country, Alternative, Blues, and others.

There are multiple commands you can relay to ‌Siri‌ to control music playback, with some examples below.

If you ever want to revisit the playlists and radio stations that ‌Siri‌ creates for you through voice commands on ‌HomePod‌, head over to the For You tab in ‌Apple Music‌. If you scroll down a bit, you should see "Recently Played" filled with the content that ‌Siri‌ played on ‌HomePod‌.

If you have any other useful ‌Siri‌ commands we didn't mention, be sure to share them in the comments.

justperry
Too many Homepod articles to my liking lately, and no, I don't read these HP articles, just think MR is overdoing it.
Score: 14 Votes (Like | Disagree)

I appreciate guides, but if Siri worked correctly we wouldn’t need them.

What happened to the promise of natural language recognition? Siri should understand us — we shouldn’t have to memorize phrases specifically to Siri’s liking.

Ha! Homepod is a bit like one of those old text adventures.

"Use key in lock"

Naaaaak
I appreciate guides, but if Siri worked correctly we wouldn’t need them.

What happened to the promise of natural language recognition? Siri should understand us — we shouldn’t have to memorize phrases specifically to Siri’s liking.
Score: 7 Votes (Like | Disagree)

Wanted797
Can I ask Siri when MacRumors will be doing a story that’s not about HomePod?
Score: 6 Votes (Like | Disagree)

Can I ask Siri when MacRumors will be doing a story that’s not about HomePod?

20 hours ago by Joe Rossignol