How to Create Alarms on Your HomePod

HomePod, much like an iPhone or iPad, can be used as an alarm clock replacement to wake you up in the morning or remind you of important tasks.

Using HomePod as an alarm clock is simple, but it is controlled separately than alarms on your iPhone and there are a few tricks to be aware of. 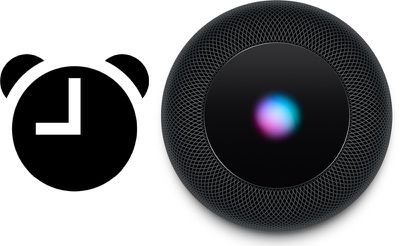 The easiest way to set an alarm on the HomePod is to ask Siri. Siri can set a one-time alarm for you, or Siri can set recurring alarms that go off every day. Some sample commands:

TIP: Labeling your alarms makes it easier for you to remember them and to reference them again when giving commands to Siri.

Changing an alarm is also possible, with a command like "Hey Siri, change the 2:00 p.m. alarm to 3:00 p.m, and if you want to know what alarms you have set up, say "Hey Siri, what alarms do I have on?"

Siri will run through all alarms that are set up on the HomePod with that command.

Managing and Setting Alarms in the Home App

Alarms that you set up on the HomePod through Siri can be viewed and managed in the Home app.

The "Alarms" section of the HomePod in the Home app looks a lot like the Alarm portion of the Clock app on the iPhone, so if you've used that, it should be immediately familiar.

With any alarm that you set or edit, you can add a time, cause it to repeat, and change the label.

NOTE: Prior to the HomePod's release, there were rumors suggesting users would be able to set songs as custom ringtones for the alarm feature of the HomePod, but that is not possible. There is no option to change the default sound of the alarm on the HomePod.

JoEw
Damn shameful you can't have the alarm set to a playlist, song or radio station on AM. This seems like a day 1 kind of feature for a device like this.
Score: 8 Votes (Like | Disagree)

Jobindoza
It is possible to snooze an alarm. The catch is that your have to speak the command: “Hey Siri, snooze”
Score: 4 Votes (Like | Disagree)

341328
This is really TERRIBLE.... the alarm feature should:
1) be able to play Apple Music playlist or radio station or genre
2) be able to fade on over X minutes
3) allow you to set the volume of the alarm
Score: 2 Votes (Like | Disagree)

PlutoPrime
How about setting a "sleep" alarm for an audio device? The fact that you can't have your podcasts shut off after a certain amount of time kills about 33% of the usefulness of the home pod for me. It's a shame that so many day-1 features are missing.

It is possible to snooze an alarm. The catch is that your have to speak the command: “Hey Siri, snooze”

This is what happens when a website focuses on quantity of articles rather than quality. Thanks for being their fact checker!
Score: 1 Votes (Like | Disagree)

Damn shameful you can't have the alarm set to a playlist, song or radio station on AM. This seems like a day 1 kind of feature for a device like this.

Absolutely- especially since Sonos offers such a nice way of doing this, absolutely love their alarm with an Apple Music playlist and a smooooth fade in! It’s really a nice way of waking up! And Apple has such good curated playlists at Apple ,sic, that work perfectly in conjunction with Sonos. Would have totally expected the HomePod to do the same thing. Disappointing. Hope we’ll see a massive software update for this thing later this year!
Score: 1 Votes (Like | Disagree)
Read All Comments