The HomePod offers great sound, and with AirPlay connectivity, you can set the HomePod up to function as a speaker for your Apple TV, routing Apple TV sound through the HomePod.

You can use Apple TV and HomePod together as long as you have a third, fourth, or fifth-generation Apple TV 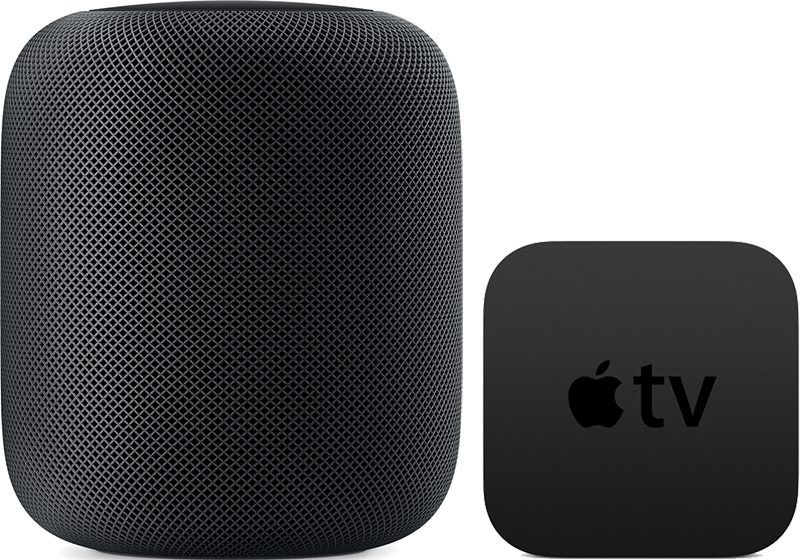 Once the Apple TV is paired with the HomePod, TV sound will be routed through your HomePod instead of through your TV. Using the HomePod's physical controls, you can change the volume of the Apple TV, or you can ask Siri to do so. You can also play/pause content through the top of the HomePod or through Siri.


You'll presumably want to use your HomePod for purposes beyond playing audio from the Apple TV, and unpairing is done through the same settings you used to pair the HomePod and Apple TV in the first place.


You can also choose your HomePod as your audio output device using your Apple TV Remote, which is a quicker way to swap between devices.

To go back to using the Apple TV audio, you can repeat the same steps above, but this time select your Apple TV instead of the HomePod.

In a future update to iOS 11, Apple plans to introduce support for pairing two HomePods together for the equivalent of stereo sound. Once dual HomePod pairing is available, you'll be able to use two HomePods with the Apple TV for even better sound.


So when you leave the house you unplug your tv, stove, microwave, lights, furnace, etc, etc. It’s a good quality speaker with bass and a lot of output, speakers like that almost never have battery’s because they need more power than a battery can give, and leaving it plugged in or anything doesn’t really matter, power draw from anything is very minimal if its off, it’s actually more likley for a battery to combusted than an electrical fire
Rating: 27 Votes


Yes. Pull one of your HomePods out of your ear and it will pause the Apple TV.
Rating: 15 Votes

rshev
There is a much faster way - just hold play/pause button on the home screen, and then select audio output.
Rating: 7 Votes

The audio volume is so low using when using apps in Apple TV. I crank the volume up to max, and it's not really very loud. This is my one disappointment with homepod. Not sure why this is the case. Grrr. :(


They need to put out an update for the Apple TV so the output isn’t so low when using the HomePod. I’ve noticed having it cranked all the way up is still significantly lower volume than when I’m using the speaker on it’s own.


FWIW, now that I think about it, when I use my AirPods with the Apple TV I do the same thing - have the sound nearly at 100%
Rating: 6 Votes


do you unplug your refrigerator?
Rating: 5 Votes

ike1707
My only ultimate disappointment with this product thus far is 2 home pods are explicitly not designed to work as stereo TV speakers together. If I could replace a set of traditional tower speakers with these puppies, it would be an instant sale.
Rating: 5 Votes

Volume through Homepod/AppleTV pairing is literally HALF of what you can otherwise get through HomePod. Very limiting. Not good enough for movies.


That’s really disappointing, I wanted to possibly get two HomePods and put them on each end of the tv. If they fix the volume issue and enable volume control through the Apple TV remote do you think two HomePods would be sufficient for a sound bar replacement?
Rating: 5 Votes

You don’t leave your fridge, microwave, tv,etc... plugged in? You need to learn to relax man.
Rating: 4 Votes

Hoosier317
The number of people complaining about the limitations of their use as TV speakers is...funny. You need to invest in proper home theater speakers, not HomePods. Use them as intended, as wireless smart speakers for music.

whola
Volume through Homepod/AppleTV pairing is literally HALF of what you can otherwise get through HomePod. Very limiting. Not good enough for movies.
Rating: 4 Votes
[ Read All Comments ]