Apple's All-Screen Foldable MacBook: What We Know So Far

Apple is experimenting with various devices with foldable displays, including a MacBook. You might immediately want to point out that the MacBook is already foldable, but what we're talking about is an all-display MacBook form factor that has no standard keyboard. 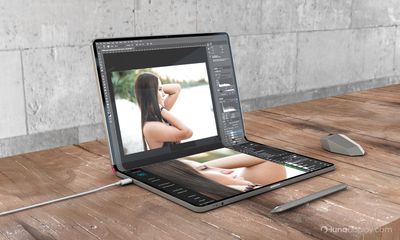 Concept by Astropad
This guide covers everything we know about Apple's work on an all-display foldable Mac in the MacBook family.

According to Display Supply Chain Consultants (DSCC) analyst Ross Young, Apple is working on foldable notebooks with displays that measure in at around 20 inches in size.

Young says that this would be a new product category for Apple, with the company perhaps selling such a device alongside traditional MacBooks with keyboards. An all-display foldable would feature a large single screen that could be folded in half.

The foldable MacBook would be dual-use, able to work as both a notebook when folded in half and as a monitor when used with an external keyboard.

Alternatively, Apple could create a foldable display with a physical keyboard, which would allow for a taller vertical display that would fold down into a compact package. We explore the different display possibilities in our dedicated foldable MacBook article.

Apple is rumored to be working with LG Display to develop a foldable OLED display panel that could be used for future foldable MacBook and iPad devices.

LG Display is working on technology that would use an ultra-thin cover glass, an upgrade over the polyimide material that current foldable displays use.

Apple also is testing electronic paper display (EPD) technology that could be used in future foldable devices, according to Apple analyst Ming-Chi Kuo. Apple could use color EPD displays from Chinese company E Ink, as this technology would be much more energy efficient than other forms of display technology.

It would have an on-screen keyboard with digital keys rather than a physical keyboard, with Apple perhaps employing haptic feedback for key feel. Apple already uses haptic feedback for the trackpad on the MacBook Air and MacBook Pro to simulate a click, so something similar could be used for an all-display device.

At the ~20-inch size that Apple is experimenting with, the foldable notebook could have a 4K or higher resolution.

So far we've only heard about a MacBook with a foldable display from a single source, Ross Young. Young is a well-known display analyst who often provides us with accurate insight into Apple's display plans.

He correctly predicted iPhone 13 Pro's ProMotion display, the display size and bezels of the sixth-generation iPad mini, the 14- and 16-inch MacBook Pro's mini-LED displays with ProMotion, and more.

Display analyst Ross Young said in July 2022 that Apple could bring some kind of foldable notebook to market in 2026 or 2027, and it is as of yet unclear if such a device would be classified as a Mac, an ‌iPad‌, or something in between.

Tuesday July 12, 2022 1:34 pm PDT by Hartley Charlton
Apple is planning a range of transformative upgrades for the iPad lineup in the coming years, including a new 14.1-inch model and an 11-inch model with an OLED display, as well as the introduction of under-screen camera technology and foldable displays, according to reliable display analyst Ross Young. The comments, made on the latest episode of The MacRumors Show, provide insights into...
Read Full Article • 80 comments

Tuesday May 10, 2022 2:08 am PDT by Tim Hardwick
Apple has started developing thinner OLED panels that could be used for foldable displays in the future, a new report out of Korea suggests. According to The Elec, Apple is developing OLED panels without polarizers, which are typically included to allow only lights in certain directions to pass through, thereby improving the visibility of the display. One drawback of polarizer films is...
Read Full Article • 66 comments

Friday April 1, 2022 3:29 am PDT by Hartley Charlton
Apple is collaborating with LG to develop a foldable OLED display panel with ultra-thin cover glass for future iPad and MacBook models, according to a report from The Elec. The report explains that LG Display will supply 17-inch foldable 4K OLED panels to HP this year, destined for an in-folding notebook with an 11-inch display when closed. LG Display has growing expertise in foldable OLED...
Read Full Article • 142 comments

Friday March 25, 2022 2:00 am PDT by Hartley Charlton
Apple could be working on an even larger, foldable iPad Pro model, multiple reports appear to indicate. Display Supply Chain Consultants (DSCC) analyst Ross Young recently claimed that Apple is exploring the possibility of offering notebooks with foldable displays. The company is said to be discussing such devices with displays around 20 inches in size with its suppliers. This display size...
Read Full Article • 0 comments

Wednesday February 23, 2022 8:04 am PST by Hartley Charlton
Amid reports of Apple working on a notebook with a foldable display, how exactly could such a device be implemented? Concept by Majin Bu Earlier this week, Display Supply Chain Consultants (DSCC) analyst Ross Young claimed that Apple is exploring the possibility of offering notebooks with foldable displays. The company is said to be discussing such devices with displays around 20-inches in...
Read Full Article • 162 comments

Monday February 21, 2022 7:47 am PST by Hartley Charlton
Apple has likely delayed its foldable iPhone until 2025 and the company is exploring all-screen foldable MacBooks, according to Display Supply Chain Consultants (DSCC) analyst Ross Young. In a new DSCC report on upcoming foldable and rollable devices, Young explained that Apple's long-rumored foldable iPhone has been delayed until 2025. This appears to be a significant delay compared to previ...
Read Full Article • 156 comments