After discontinuing the HomePod in March, Apple is now working on a new HomePod product with a screen, according to reliable Bloomberg journalist Mark Gurman. 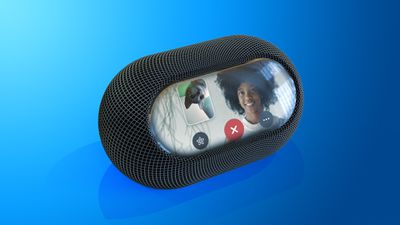 Render of a HomePod with a built-in camera and a large display.
In a recent report, Gurman mentioned that Apple has "been developing new speakers with screens and cameras."

This suggests that Apple could be at least exploring the idea of releasing new ‌HomePod‌ models with a display and camera to compete with equivalent products such as Google's Nest Hub Max, Amazon's Echo Show, and Facebook's Portal, but Gurman cautions that "a launch isn't imminent," so there is no guarantee that Apple will release such a product.

The Google Nest Hub Max
The Nest Hub Max also functions as a "smart digital picture frame" for photo albums, and it can display a live video feed from Nest cameras and video doorbells, making it suitable for a kitchen countertop or bedside table.

Apple's potential camera-equipped ‌HomePod‌ would presumably offer similar functionality like FaceTime video calling and HomeKit integration if it ever comes to market. This appears to be supported by the discovery of Apple recently adding the FaceTime and iMessage frameworks, as well as AVFCapture for capturing images, to the underlying software that runs on the ‌HomePod‌. These frameworks could have been added to accommodate a future ‌‌HomePod‌‌ that has a screen and a camera, as Gurman describes.

In March, Apple announced that it is discontinuing the full-size HomePod and shifting its focus to the HomePod mini. The company is also believed to have scrapped its plans for an updated ‌HomePod‌ model that was originally slated to launch in 2022.

Gurman said that Apple still lacks a "unifying strategy" for the smart home market, with some people within the company apparently blaming the lack of progress on Siri's shortcomings compared to Google Assistant and Alexa. This may have prompted the company to consider a completely new direction for the ‌HomePod‌.

Whether new ‌HomePod‌ models with screens and cameras will come to fruition remains to be seen, but it seems likely that Apple is not yet ruling out a totally new ‌HomePod‌ product.