With Apple's annual Worldwide Developers Conference (WWDC) kicking off next Monday, June 10 at 10:00 AM Pacific Time with a keynote address, it's time for a roundup of rumors about what we might see at the event.

In announcing the conference back in late April, Apple unsurprisingly revealed that it will be delivering "new versions of iOS and OS X" to developers, undoubtedly referring to iOS 7 and OS X 10.9. And as has become tradition since Apple moved its iPhone launches later in the year starting in 2011, WWDC 2013 is indeed expected to live up to its developer focus with an emphasis on software.

iOS 7 will almost certainly make its consumer debut alongside updated iPhone hardware later this year, but WWDC will offer the first glimpse of the upcoming software and Apple should spend a fair amount of the keynote walking through the changes. Apple will also begin seeding versions of iOS 7 to developers at WWDC, giving them time to help test the operating system itself and to build and update their own apps to take advantage of new features coming in iOS 7.

The big discussion surrounding iOS 7 has been regarding a new "flat design" driven by Jony Ive, who took over control of Apple's software-focused Human Interface team late last year in addition to his longtime role as head of Industrial Design. Prominent rumors for iOS 7 include:

For this year's OS X 10.9, many had been expecting Apple to mirror its 2012 OS X Mountain Lion schedule with developer previews beginning around February ahead of a late summer public launch, but despite a evidence of the next version of its Mac operating system showing up in web blogs late last year, the company has yet to make any public announcements about the update.

Back in April, Daring Fireball's John Gruber reported that with iOS 7 having been running behind schedule, Apple had been pulling engineers from OS X 10.9 in order to assist with the iOS work. The report was later confirmed by AllThingsD and The Loop, although it seems unclear whether the shift had any effect on Apple's internal timeline for OS X 10.9. Details on what to expect in OS X 10.9 have been relatively scarce, but rumors have included:

Apple has been rumored to be working on a Pandora-like streaming radio service for quite some time, but difficult negotiations have reportedly slowed the effort considerably. Just weeks ago, it was reported that continued difficulties with record label and publisher negotiations might result in Apple being unable to unveil the service at WWDC, but just this past weekend Apple signed Warner Music in what appears to be a last-minute push to secure deals in time for a WWDC announcement. The service would not, however, launch until later this year alongside iOS 7.

The service, informally dubbed "iRadio", is said to be free to users, relying on advertising support through Apple's iAd team to generate revenue. Apple is reportedly seeking to deploy a service similar to that offered by Pandora but with additional flexibility for users.

With Intel having announced a series of new Haswell chips yesterday, Apple's Mac lineups may be ready for updates. Apple's notebook lineup appears to be the primary target for updates at WWDC, with reliable analyst Ming-Chi Kuo calling the notebook refresh the hardware highlight of WWDC. Leaked model numbers have hinted at notebook updates for WWDC, although the identities of the products associated with those numbers have not yet been confirmed.

Following a disappointing update for the Mac Pro last year, coming approximately two years after the previous update, Apple took the unusual step of confirming that the company would have a redesigned Mac Pro for "later" in 2013. Some rumors had suggested that Apple might launch the new Mac Pro this spring, but the update failed to come to fruition. Apple has even been forced to halt sales of the current Mac Pro in Europe over non-compliance with certain safety requirements.

WWDC represents a reasonable opportunity for Apple to update the Mac Pro given the developer and professional focus for the conference, and stocks of the workstation are said to be running low. Timing may not, however, be in Apple's favor, as at this point the Mac Pro would be expected to adopt Intel's Ivy Bridge E processors, the full line of which is not expected until around September of this year. Still, it is possible that Apple could announce a new Mac Pro at WWDC with availability scheduled for the future.

The WWDC 2013 keynote kicks off at 10:00 AM Pacific Time on Monday, June 10, and we will be providing live updates here. We will also be issuing Twitter updates through our @MacRumorsLive account. Separate news stories regarding the event announcements will go out through our @MacRumors account.

In a nutshell: not much. 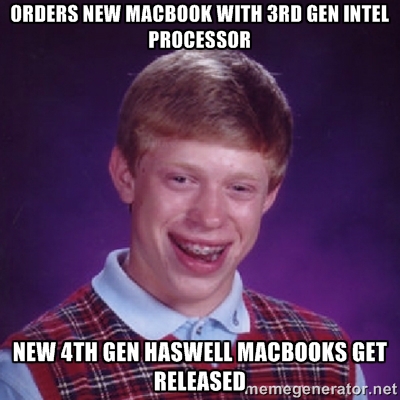 iRadio? Who cares? I hate all radio. Pandora, etc. I shouldn't have to listen to music with advertisements. Radio is dead and has been dead for a while. Apple killed it with their iPod and they haven't even realized it yet? Jeez.


You sound like an old geezer. Things change. Get used to it.

In the Napster era, people thought 'Why would anyone pay for music anymore?' iTunes changed all this.

The music industry is still in the middle of huge changes.
Score: 12 Votes (Like | Disagree)

rjtyork
iRadio? Who cares? I hate all radio. Pandora, etc. I shouldn't have to listen to music with advertisements. Radio is dead and has been dead for a while. Apple killed it with their iPod and they haven't even realized it yet? Jeez.
Score: 11 Votes (Like | Disagree)

Jack97
I'm more excited for this than I have been for an apple announcement in a long time.
Score: 11 Votes (Like | Disagree)

Other than iOS 7, I'm really excited for the mac lineup. I want to see a Retina Macbook Air. :D


I keep hearing this wish ... I've finally snapped! The 13" rMBP IS the Retina Macbook Air.

They've removed all the moving parts from a traditional Macbook (Pro or otherwise), jammed the smallest battery into it and slapped a 13" screen on it. The fact that it isn't $1299 or exactly as thin as the Air is what you're really wishing for. 13" Retina screens require more horses in CPU/GPU so the cooling space in the Air is inadequate and the motherboard footprint is slightly larger. Plus they require more battery power to operate over the desired operating duration. And they're more expensive. So until Apple can overcome physics and economics, the 13 inch rMBP is your desired 13 inch Air.

Having said all of that, I'm thinking that it will get a bit of a thickness tweak next week, due mostly to Intel's Haswell and possibly improved backlight efficiency. That adds up to smaller batteries and therefore a smaller chassis. And if they somehow bump the RAM up to 16GB...I'm in! Truth be told I'm in no matter what. Unless the new Mac Pro changes my mind about another desktop to replace my Mini.
Score: 9 Votes (Like | Disagree)
Read All Comments

Monday November 28, 2022 11:00 am PST by Juli Clover
Apple's upcoming iPhone 15 models will be equipped with Sony's newest "state of the art" image sensors, according to a report from Nikkei. Compared to standard sensors, Sony's image sensor doubles the saturation signal in each pixel, allowing it to capture more light to cut down on underexposure and overexposure. Nikkei says that it is able to better photograph a person's face even with...
Read Full Article • 132 comments

Monday November 28, 2022 10:42 am PST by Juli Clover
Apple has cut back on its Twitter advertising, according to Twitter CEO Elon Musk. In a tweet, Musk said that Apple has "mostly stopped" its Twitter ads, asking if Apple hates "free speech." Musk went on to publish a poll asking if Apple should "publish all censorship actions" taken that impact customers and he began retweeting content from companies that Apple has had moderation discussions ...
Read Full Article • 1317 comments