First introduced with OS X Lion, AirDrop is a Finder function that allows Mac users to share files with other Mac users without the need for a Wi-Fi network or storage device. AirDrop for iOS is said to work in the same way, allowing files to be quickly shared between two different users. 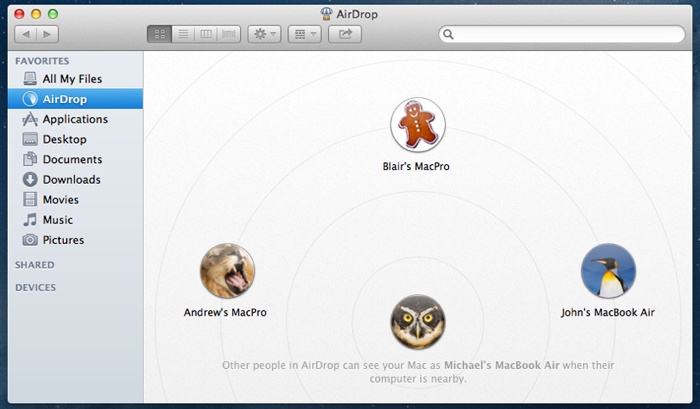 Sources say that the AirDrop functionality is currently integrated into the standard iOS share menu. AirDrop will work between two iOS devices and potentially between an iOS device and a Mac. The feature will make it easier than ever to transfer, for example, a photograph or document from one person's iPhone to another person's iPad.

Along with AirDrop file sharing, iOS 7 is also expected to feature a major redesign and enhanced social network integration, which includes support for both Flickr and Vimeo. As noted by 9to5Mac, beta features that are in testing, like AirDrop, may or may not make it into the final version of the operating system.

iOS 7 will debut at the keynote of Apple's annual Worldwide Developers Conference, which is scheduled to take place on June 10.

BJB Productions
The day I can stop emailing myself photos that I take on my iPhone will be a good day.
Rating: 44 Votes

They already have this functionality. Its called s-beam (android beam) Its also much better implemented and uses wifi direct so it doesn't require devices to be on the same wireless network like this will. Using NFC for the pairing makes the setup of the connection extremely simple.


No, AirDrop doesn't require you to be on the same WiFi network.

It also doesn't require you to touch devices or anything. The other person could be in the next room, upstairs, etc.
Rating: 36 Votes

The way it works in the Mac, you don't even need to be on the same Wi-Fi network - in fact you don't need a WiFi network at all to send files.

It works if you're both on different WiFi networks, or if one or both of you has no WiFi at all. It's perfect for the iPhone.

It works by having the WiFi card switch rapidly between the two states; which means you get a real proximity-based 'who is near me' list (...of people also in the AirDrop window; for privacy reasons the Mac doesn't keep broadcasting).
Rating: 31 Votes

They already have this functionality. Its called s-beam (android beam) Its also much better implemented and uses wifi direct so it doesn't require devices to be on the same wireless network like this will. Using NFC for the pairing makes the setup of the connection extremely simple.


So based on your comments you do not even know how AirDrop works on a Mac right now even though it's been around since 2011.

I'm quite intrigued. How do you know the S-Beam feature is "much better implemented" when you don't know anything about AirDrop and none of us knows exactly how the feature will be implemented on iOS? Are you a clairvoyant?
Rating: 24 Votes


They already have this functionality. Its called s-beam (android beam) Its also much better implemented and uses wifi direct so it doesn't require devices to be on the same wireless network like this will. Using NFC for the pairing makes the setup of the connection extremely simple.
Rating: 24 Votes

ideal.dreams
This would actually be nice...AirDrop would finally have a use for me.
Rating: 23 Votes

I have Apple products.

How about they put out something that is actually worth buying so I can buy a new toy.

This feature if it's even in iOS7 will more than likely be limited to the 5S and maybe 5 just like Siri and Maps.

By the way, hope it comes to Apple and welcome to the 2009 warp drive.

And for the record. I never argue. I state facts that some Apple users don't like. It's call being a realist.


If you think Apple's current products aren't worth buying, go get an Android device. You already talked about how Android has supported Wi-Fi Direct for a while now, and you sarcastically mention Apple's lack of NFC support. So why complain- go buy something that already does what you want it to do!
Rating: 17 Votes

saberahul
This will be helpful but Apple still needs to implement a built in file system.
Rating: 16 Votes