Apple Event on Tuesday Will Reveal These Long Awaited Products

Apple has now sent out invites to its "California Streaming" special event, set to be take place on Tuesday, September 14, and the event is expected to see the reveal of several long-awaited products. 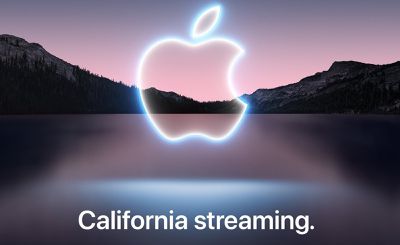 Rumors from over the past year have indicated that Apple will announce the iPhone 13 lineup, Apple Watch Series 7, and third-generation AirPods at its September special event.

Although major design changes are not expected this year, all models are expected to feature a smaller notch, a faster "A15" chip, Wi-Fi 6E connectivity, a new 5G chip from Qualcomm, larger batteries, reverse wireless charging, and a large number of camera hardware upgrades.

The Apple Watch Series 7 is expected to feature a number of upgrades, including a new design with squared-off edges, larger casing sizes with bigger displays, updated display technology, improved Ultra Wideband connectivity, a smaller, faster processor, a bigger battery, new watch faces, and potentially new color options. For more on what is expected from the Apple Watch Series 7, see our comprehensive guide.

Apple's third-generation AirPods are expected to have an updated design that is closer to the AirPods Pro with shorter stems and a wider, shorter charging case, but will continue to be a more affordable option without Active Noise Cancellation. Other new features could include a next-generation wireless chip, force sensor controls, and a pressure relief system. See our guide on the third-generation AirPods for more detailed information.

Apple will stream the special event live on its website, on YouTube, and on the Apple TV through the ‌Apple TV‌ app. For those unable to watch, MacRumors will be providing full event coverage both on MacRumors.com and the MacRumorsLive Twitter account.

Saturday February 4, 2023 10:05 am PST by Eric Slivka
Online retailer TigerDirect has slashed pricing on the M1 iPad Air in several colors, offering the base 64GB configuration for just $313.99 in Purple and Pink. Note: MacRumors is an affiliate partner with TigerDirect. When you click a link and make a purchase, we may receive a small payment, which helps us keep the site running. That's a savings of 48% compared to Apple's normal $599.00...
Read Full Article • 353 comments

Sunday February 5, 2023 6:07 am PST by Joe Rossignol
Apple has discussed selling a new top-of-the-line iPhone alongside the Pro and Pro Max models in 2024 at the earliest, according to Bloomberg's Mark Gurman. Based on this timeframe, the device would be part of the iPhone 16 lineup or later. In a September 2022 edition of his weekly "Power On" newsletter, Gurman said there was "potential" for an iPhone 15 Ultra to replace the iPhone 15 Pro...
Read Full Article • 304 comments

Saturday February 4, 2023 1:30 am PST by Hartley Charlton
Google's Chromium developers are working on an experimental web browser for iOS that would break Apple's browser engine restrictions, The Register reports. The experimental browser, which is being actively pursued by developers, uses Google's Blink engine. Yet if Google attempted to release it on the App Store, it would not pass Apple's App Review process. Apple's App Store rules dictate...
Read Full Article • 238 comments