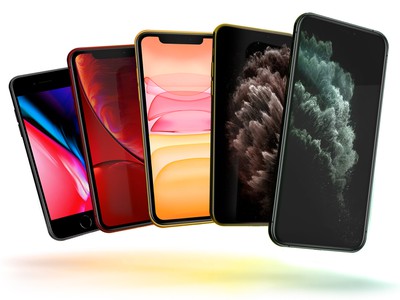 In 2007, Apple launched the original iPhone, kickstarting the modern smartphone era which is now dominated by the Apple iPhone and Google Android platforms. We've had 12 years of iPhones so far, with the latest models, the iPhone 11 and iPhone 11 Pro, having launched in October of 2019, and the iPhone SE coming in April 2020. Apple typically follows an annual update cycle, introducing new high-end flagship models while often discounting prior-year models and selling them at more affordable price points.

Over the years, the Android and iPhone platforms have evolved to the point where feature-wise, they're similar in function. Android smartphones are made by multiple manufacturers, but the operating system is provided by Google, which leads to a wider variety of phones and price points to choose from, but poorer integration between software and hardware.

Apple's control of both the iPhone and the operating system (iOS) results in a more consistent experience plus ongoing support. With iOS 13, Apple supports all iPhones that were introduced in the last four years, so the majority of active iPhone owners can and do upgrade to the newest version of iOS that Apple rolls out each year.

Android updates, though, are are more inconsistent and often don't make it to all Android-based smartphones because each manufacturer has to implement support on an individual basis. So while Google also does yearly Android updates, the reality is that a lot of older Android smartphones don't get the new software.

With Apple's control and curation of the iPhone experience, the iPhone is largely considered to be the more secure platform, and Apple has made it a point to focus heavily on privacy. Apple's iOS is, however, less customizable than Android, so for individuals who prefer flexibility and customization options, the Android operating system may be worth looking at.

How do iPhone Updates Work?

Here are the basics you should know about how Apple updates the iPhone and the iOS operating system.

Each fall, usually in September, Apple releases a new series of flagship smartphones. These often come at high prices and feature the latest technologies, with Apple offering one super high-end model and one still high-end but more affordable model. Prior year iPhones often stick around with lower price points as cheaper alternatives to the latest and greatest technology, and occasionally, Apple launches an iPhone like the low-cost iPhone SE outside of the normal fall timeline.

Apple also debuts an updated version of iOS at the same time that new iPhones launch, but new versions of iOS are pre-introduced every year at Apple's annual Worldwide Developers Conference to give developers time to incorporate new features and technologies into their apps ahead of when the software becomes available to the public.

In 2020, Apple will introduce iOS 14 in June, letting developers and public beta testers try out the software early. iOS 14 will see its official public launch alongside new iPhones in the fall of 2020.

In this guide, we go over all of the iPhones that are in the current Apple lineup, offer up some buying suggestions, and provide tips and resources for both new and existing iPhone owners.

The iPhone 11 Pro and iPhone 11 Pro Max are Apple's current flagship devices, with the top of the line features and the most bells and whistles.

Both have edge-to-edge OLED displays with slim bezels, a notch with TrueDepth front-facing camera systems for Face ID biometric authentication, glass bodies with stainless steel frames, the latest super fast A13 chips, IP68 water resistance (the highest offered in an iPhone), and a triple-lens camera system.

The triple-lens camera system is unique to the iPhone 11 Pro and Pro Max, offering a telephoto lens, a wide-angle lens, and a super wide-angle lens that gives you a lot of versatility when taking shots.

You can use the telephoto lens to take close up shots and portraits, and then zoom out to the ultra wide-angle lens for amazing landscape and architecture shots. Night Mode, a feature that lets you get awesome shots even in super low lighting conditions, is also included.

Bottom Line: The iPhone 11 Pro and Pro Max are the iPhones to choose if you want the absolute best camera capabilities that you can get in an iPhone. If you value an OLED display, these are Apple's only current devices with OLED.

The LCD display doesn't offer the deeper blacks and HDR features available with the OLED display, but the iPhone 11's display is still quite good and one of the better smartphone LCD displays on the market. You can see a difference between the iPhone 11 and iPhone 11 Pro when the two phones are side-by-side, but in everyday usage, the lack of OLED is less noticeable.

The difference in the cameras doesn't matter much unless you're someone who often likes to take portraits and closer shots as it still has the ultra wide-camera, which is the new technology in 2019.

The iPhone 11 features a glass body but rather than the stainless steel frame of the 11 Pro, it has a less expensive aluminum frame. It also comes in a range of bright colors, while the 11 Pro is limited to Silver, Space Gray, Gold, and Midnight Green.

Apple's iPhone XR was released in 2018, but Apple is continuing to sell it as a lower-cost alternative to the iPhone 11 and iPhone 11 Pro.

Priced starting at $599, the iPhone XR has the same design as the iPhone 11, but with a single-lens camera instead of a dual-lens camera and a different range of color options.

Aside from these changes and some updates to the iPhone 11 display, the iPhone XR is identical to the iPhone 11 with TrueDepth camera system and Face ID, LCD display, glass body and and aluminum frame (with lesser water resistance), and wireless charging support.

It's using year-old technology, though, so it has an A12 chip instead of an A13 chip and cameras that aren't quite as good as the camera in iPhone 11, but at its price point, it's still a very capable device that's going to last for several years to come.

Bottom Line: The iPhone XR is a good choice if you like the feature set of the iPhone 11 but want to shell out slightly less money. We believe it's worth the $100 upgrade to the 11 if you take a lot of photos, but if you don't, there aren't too many differences between the 11 and the XR.

Introduced in April 2020, the iPhone SE is Apple's most affordable iPhone, and it replaces the iPhone 8 and iPhone 8 Plus, which have been discontinued.

Priced at $399, the iPhone SE is identical in design to an iPhone 8 with a 4.7-inch LCD display and thick bezels at the top and bottom of the device, housing the Home button at the bottom and the front-facing camera, speaker, and microphone at the top.

The iPhone SE is now the sole iPhone that Apple sells with Touch ID, which makes it ideal for those who prefer a fingerprint sensor to Face ID.

The iPhone SE has a glass front and back with an aluminum frame, and it supports wireless charging. Inside, it is equipped with the same A13 Bionic processor that's in the iPhone 11, 11 Pro, and 11 Pro Max, so it's just as fast.

While the chip is the same, Apple is using lower cost components for the rest of the device, and it is missing the bells and whistles of Apple's more expensive smartphones such as multi-lens camera setups, OLED all-screen displays, and Face ID. The SE features 64, 128, or 256GB of storage.

Bottom Line: The iPhone SE is the phone to get if you prefer Touch ID or if you're looking for an affordable option. At $399 with an A13 chip, it is an incredible deal.

There's no one single iPhone that's best for everyone, as picking the right smartphone for you needs to take into account factors like budget, desired battery life, preferred feature set, and more.

Below, we've outlined some of the best iPhone choices based on different scenarios or features that you might be looking for.

Which iPhone Has the Best Battery Life?

With their more efficient A13 processors, the iPhone 11, 11 Pro, and 11 Pro Max have the longest battery life of Apple's iPhones.

Of the three, the 6.5-inch iPhone 11 Pro Max has the longest battery life because it has the space for a larger battery. It offers up to 20 hours of video playback, 12 hours of streaming video playback, and 80 hours of audio playback.

Which iPhone Has the Best Camera?

With their updated triple-lens camera systems, the iPhone 11 Pro and iPhone 11 Pro Max have the best iPhone cameras that you can get.

There's a 12-megapixel wide-angle camera with a larger sensor and better autofocusing capabilities than previous iPhone models, a 12-megapixel telephoto lens with an improved f/2.0 aperture for closer shots, and a new ultra wide-angle lens that offers up a 13mm focal length that's perfect for wide group shots, architecture, landscapes, and more.

The iPhone 11 Pro also features Night Mode for taking incredible photos in low lighting conditions, and Portrait Mode for shots where the background is blurred. Night Mode is easily one of the best camera improvements Apple has added in years, and it's an incredible feature to have for iPhone photographers.

The iPhone 11 gets an honorable mention here because it has the same wide-angle and ultra wide-angle cameras that are in the iPhone 11 Pro, but without the telephoto lens. It too does Night Mode, making this the best choice if you're looking for fantastic image quality on a budget.

Which iPhone Has Touch ID?

If you want an iPhone with Touch ID, your only option is the 2020 iPhone SE. Apple stopped using Touch ID for its flagship iPhones in 2017, and the 2018 and 2019 iPhone lineups have not included an updated Touch ID iPhone.

The iPhone SE features Touch ID rather than Face ID to keep the device ultra affordable, which is great for those who prefer using a fingerprint sensor over facial recognition.

Which iPhone is the Best Value?

It's a tie between the iPhone 11 and the iPhone SE. Apple introduced a great feature set in the iPhone 11 while also keeping the price point below $700, and even less if you trade in an older model.

The iPhone 11 has the same camera setup as the iPhone 11 Pro (minus the telephoto lens) and the same super fast, super efficient A13 chip with 4GB RAM, Battery life is similar too (and incredible), plus it has the same TrueDepth front-facing camera system with Face ID, and it comes in a whole range of fun colors.

For most people, the iPhone 11 is a great deal and has all of the capabilities you could possibly want from an iPhone, so this is the best all-around iPhone to get if you want a modern feature set that will last.

If you're on a budget and prefer Touch ID, the iPhone SE is the phone to pick. It starts at just $399 and it while it only has a single lens camera and an older design that still includes thick bezels, it has the same A13 chip that's in the flagship iPhones so it's just as fast.

Which iPhone Has the Most Features?

Apple is working on a few new iPhone products, including the 2020 flagship iPhone 12 devices, which are expected to feature 5G connectivity, a refreshed design that looks similar to the 2018 and 2020 iPad Pro models with flat edges, and a camera system that includes a LiDAR Scanner for improved augmented reality capabilities.

Have questions about choosing an iPhone, notice something we left out, or want to offer feedback on this guide? Send us an email here.