Apple's iPhone 13 series will feature a redesigned Face ID system that will allow for a smaller notch at the top of the screen, according to a new report today. 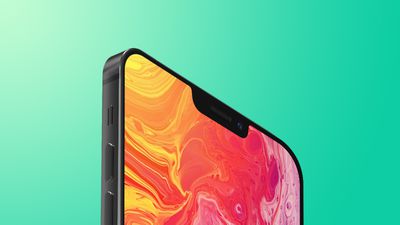 The rumor comes via hit-and-miss Taiwanese industry publication DigiTimes, whose supply chain sources also claim that the ultra wide-angle lens in Apple's next-generation iPhones is due for an upgrade.

The next-generation iPhones' Face ID system will see some design changes with the size of the notch at the top of the screen to shrink and their ultrawide angle lens upgraded from 5P to 6P, the sources said.

The new design integrates Rx, Tx and flood illuminator into the same camera module, similar to that of a LiDAR scanner in the back camera module, to enable smaller notch sizes, the sources stated.

This is the third time that we've heard rumors of a thinner or shallower notch for the ‌iPhone 13‌. Japanese site Mac Otakara has previously cited sources within the Chinese supply chain that say the same thing, while leaker "Ice Universe" has also claimed a smaller notch is coming this year.

Both rumors have suggested that rather than being reduced in width, the notch may be reduced in height to make it less noticeable, so it's possible the 2021 ‌iPhone‌ models will have a notch that's the same length but not as tall.

The sources revealed that the Pro family of the next-generation iPhones reportedly will feature a newly-designed CIS, while the other models will adopt the CIS used by the iPhone 12 Pro devices. The CIS will be supplied mainly by Sony, the sources said.

The rumors come from the same DigiTimes story that appeared on Wednesday in a preview version, claiming that the entire ‌iPhone 13‌ lineup will feature sensor-shift optical image stabilization.

cableguy84
No notch at all please
Score: 32 Votes (Like | Disagree)

MJaP
I hope they take the Face ID system from the iPhone and fit it into the bezels of the new iMacs (and redesigned MacBooks) so we can have automatic unlock ala Windows Hello, it's a really nice convenience.
Score: 19 Votes (Like | Disagree)

xxray
This has been a rumor for every iPhone since the X and it’s still never happened
Score: 15 Votes (Like | Disagree)

biffuz
I am a notch hater, but my real problem is not with the notch itself, but the fact that videos and games are played around it. That's very disturbing to me.
Dear Apple, can you consider to NOT do that?
Score: 10 Votes (Like | Disagree)

Seanm87
Yeah I'll believe it when I see it. They said that about the iPhone 12 too.
Score: 8 Votes (Like | Disagree)
Read All Comments