Apple plans to include a "slightly bigger" wireless charging coil in this year's iPhone 13 lineup, which will not only yield improved heat management and higher wattage, but could be paving the way towards reverse wireless charging, according to a new rumor from Max Weinbach (via EverythingApplePro). 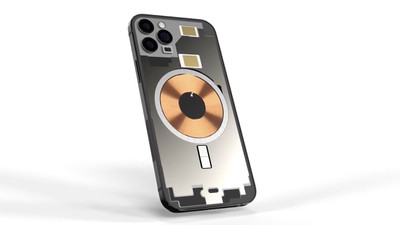 Image Credit: EverythingApplePro
According to the rumor, Apple plans to make the physical wireless charging coil in this upcoming iPhone larger, which would increase the surface area of where wireless charging can be induced. Weinbach had previously reported that the 2021 iPhones will feature stronger MagSafe magnets, which in today's rumor, he reiterates could be a reason behind the increased coil size.

Weinbach also speculates that the increased coil size could be used for reverse wireless charging, which would enable users to charge wireless charging compatible devices, such as AirPods, by placing them on the back of the ‌iPhone‌.

In February, Bloomberg's Mark Gurman stated that reverse wireless charging capabilities are unlikely to come to the iPhone in the "near future." Despite Apple holding off on officially announcing the feature, FCC filings for the 2020 ‌iPhone‌ revealed earlier this year that all models of the iPhone 12 lineup include the ability to reverse wirelessly charge other devices, such as ‌AirPods‌ (second generation), AirPods Pro, or newer Apple Watch models.

incoherent_1
It’s nice to have the option in a pinch, but if Apple really wants to be green, it should actively work to educate people on how wasteful (and therefore unenvironmentally friendly) wireless charging really is.
Score: 38 Votes (Like | Disagree)

contacos
No one needs to upgrade their iPhone every year anyway
Score: 25 Votes (Like | Disagree)

I hope those extra space for those coils is not being used as an excuse to minimize battery capacity.
Score: 23 Votes (Like | Disagree)

Kylo83
I wish magsafe would carry data so could use it for CarPlay
Score: 21 Votes (Like | Disagree)

Morgenland
What a nightmare at Apple.
Now their reverse product managers have gain further ground against the only efficient and fast charging with cables.
Instead of a battery larger in dimension and capacity, those cable haters put in a larger coil. That is absurd!
I fear those managers with deep expertise in energy efficiency are shaking their heads if they are still there....

The issue of device space: If you do not want to integrate promising periscope telecameras and instead add cheap super wide-angle lenses, then this is really not a step forward. I had expected more from Apple. And now even the RWC freaks are getting a kick out of it. Very unpleasant stagnation at Apple.
Score: 15 Votes (Like | Disagree)

No one needs to upgrade their iPhone every year anyway

With Apple it isn't always about need. Most of time it is simply about the want of Apple.
Score: 8 Votes (Like | Disagree)
Read All Comments

Tuesday July 13, 2021 2:12 pm PDT by Juli Clover
Apple's MagSafe Battery Pack designed for the iPhone 12 models has a unique feature that's long been rumored but never introduced in an Apple product -- reverse wireless charging. When attached to an iPhone that's charging via Lightning, the iPhone can deliver power to the MagSafe Battery Pack, which is the first instance of an iPhone being able to route power to an accessory device....
Read Full Article • 79 comments

Exclusive Deal: Get 30% Off Two of Satechi's Best Charging Accessories This Week Only

Monday July 12, 2021 7:11 am PDT by Mitchel Broussard
Today we're kicking off the week with a brand new exclusive deal for our readers, in partnership with accessory maker Satechi. With this sale, you can use the code MAC30 to take 30 percent off Satechi's Trio Wireless Charging Pad and Quatro Wireless Power Bank. Note: MacRumors is an affiliate partner with some of these vendors. When you click a link and make a purchase, we may receive a small...
Read Full Article • 6 comments

Thursday June 3, 2021 10:04 pm PDT by Juli Clover
Apple is continuing to work on a future wireless charger that would function similarly to the now-abandoned AirPower, according to Bloomberg's Mark Gurman. In a report outlining Apple's wireless charging ambitions, Gurman says that Apple is "still exploring" a wireless charger that would charge multiple devices like an iPhone, Apple Watch, and AirPods all at once. Apple first announced...
Read Full Article • 69 comments