Apple plans to release its first iPhones with Wi-Fi 6E support in 2021, according to Barclays analysts Blayne Curtis and Thomas O'Malley. 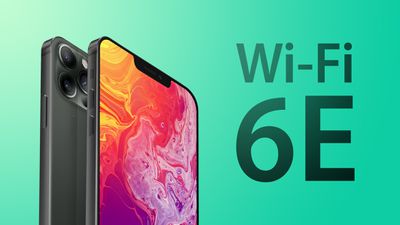 In a research note shared with MacRumors today, the analysts wrote that investor sentiment surrounding Apple supplier Skyworks has become "too negative" given that the semiconductor company will apparently be supplying various components for this year's "iPhone 13" models, including Wi-Fi 6E power amplifiers.

The analysts said chipmaker Broadcom also stands to benefit from both Apple and Samsung adopting Wi-Fi 6E this year. Earlier this month, Samsung introduced its new Galaxy S21 Ultra smartphone with Wi-Fi 6E support based on a Broadcom chip.

Earlier this year, the FCC adopted rules that make 1,200 MHz of spectrum in the 6 GHz band available for unlicensed use in the United States, paving the way for the rollout of devices supporting Wi-Fi 6E in the country.

Apple is expected to unveil its iPhone 13 lineup in September.

trip1ex
sweet. Nice to hear webpages might load in .4 seconds instead of .44 on the next iphone.
Score: 11 Votes (Like | Disagree)

sundragon
I'm here reading all the idiot comments from people living in BFE with two neighbors talking about about more speed being pointless ? Y'all missing the point...

It's about the f*&k!ng interference - Those of us that live in congested places - You know, that thing called a "city" with high rises ?
I have two high rise apartments next to my townhouse and about ~120 WIFI nodes appearing. Getting 2.4Ghz one room away in my apartment is nearly impossible with my 2 year old $400 router. Yeah, I've tried everything... 5GHZ is slowly becoming congested as well and is no longer providing consistent connections, much less speed. My BF can't get a connection to hold across his townhouse 2 rooms away for the same reasons.

This allows better connections in congested areas and consistent performance. Yes, your pron will download faster now with your 500Mbps connections but that's not always the point ??
Score: 9 Votes (Like | Disagree)

McKodiak
Too bad a Wifi 6E router costs more than an iPhone.
Score: 8 Votes (Like | Disagree)

nquinn
Why does the iPhone keep getting the faster wi-fi standards sooner than the macbooks? So backwards.
Score: 6 Votes (Like | Disagree)

I find it cute that we keep talking about increased WiFi speeds, when a good percentage of people are bottlenecked by their own ISPs. I find it already bad enough that we can't get a standard down on a Wi-Fi format, like we did back in the G/N/AC days. (I know, Wi-Fi 6 has been out now for a while, but lets be honest - it took quite a bit for it to be standardized, only to have another signal type bounce into the picture). Personally, I'm not doing so many things inside my own home network to see the huge advantage passed casting a video (which even then is rare in itself). I'll forever be tied to my ISP speeds, which in the US is slow by nature.

Not everything done over Wifi is then sent over the internet. And with WiFi 6e the real impairment is not the speed but being able to use the 6 GHz frequency for less interference which for a lot of people in congested areas can't max their internet connection speed even when its only 50 or 100 Mbps.

That said internet in the US is not slow by nature to a lot of people. Just about everyone who has access to Comcast has the option of 1 Gbps downloads, AT&T fiber (1000/1000 Mbps) is available to I believe 10 million homes, then you have Verizon FIOS and other smaller ISP's all proving 1 gig.

WiFi 6 and 6e are needed in a big way. There is a lot of work needed in rural America for faster internet and that will likely fall on 5G but in most populated places now very fast internet is available.
Score: 6 Votes (Like | Disagree)

Student of Life
I wish Apple would get back into the Router market. The AirPort Extreme's just worked. An
Score: 6 Votes (Like | Disagree)
Read All Comments

Deals: Huge iPad Pro Sale on Amazon Taking Up to $150 Off 2021 Models With Record Low Prices

Wednesday November 3, 2021 7:43 am PDT by Mitchel Broussard
Today we're tracking a massive sale on Apple's 2021 iPad Pro lineup, including up to $150 off the 11-inch iPad Pro and 12.9-inch iPad Pro. For many of these tablets, Amazon's sale prices today are offering the lowest discounts we've ever seen, or matching the previous record lows on each device. Note: MacRumors is an affiliate partner with Amazon. When you click a link and make a purchase, we...
Read Full Article • 24 comments

Friday July 9, 2021 9:32 am PDT by Sami Fathi
The latest beta for iOS and iPadOS 14.7, released to developers this week, patches a bug that disabled an iPhone's ability to connect to Wi-Fi if a user connected to a specific Wi-Fi network with the name "%p%s%s%s%s%n." In his latest video rounding up the latest changes in the beta, YouTuber Zollotech found that the update has silently patched the bug that caused an iPhone to become unable...
Read Full Article • 15 comments