Rumors about Apple's upcoming 2020 iPhones, which could be called the iPhone 12 and iPhone 12 Pro. 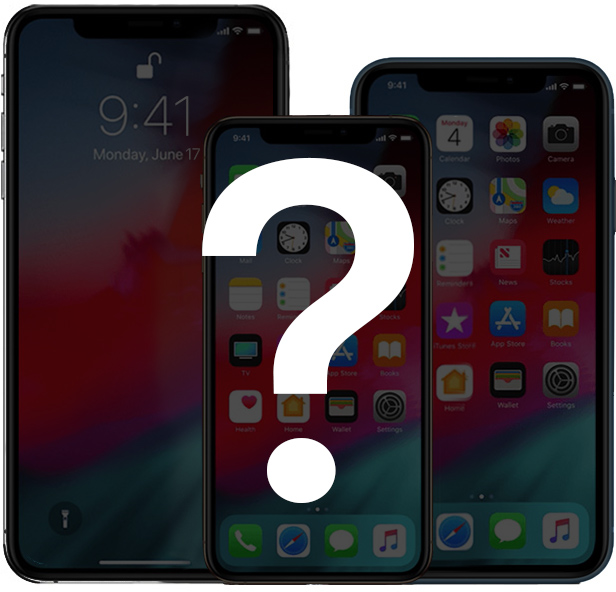 We're many months away from the launch of the 2020 iPhones, which are expected in September 2020, but there are already multiple rumors about the upcoming devices.

We're expecting the 2020 iPhones to be called the iPhone 12 and iPhone 12 Pro if Apple follows the same naming scheme it used for the 2019 iPhone lineup.

The 2020 iPhones will feature major updates, introducing some of the first design changes that we've seen since the iPhone X was released in 2017. We're expecting four iPhones in three display sizes which could come in at 5.4, 6.7, and 6.1 inches (x2).

Rumors suggest the 6.7-inch iPhone and one 6.1-inch model will be higher-end OLED devices with triple-lens cameras, while the 5.4 and 6.1-inch models will be lower-end iPhones with dual-lens cameras and a more affordable price tag. All iPhones in 2020 are expected to feature OLED displays regardless of price.

Design wise, rumors suggest at least one of the new iPhones will feature a significant redesign with a metal frame that's similar to the frame of the iPhone 4. The iPhone 4 had a distinctive, flat look for its stainless steel frame, which could be replicated in the new iPhones.

There could be a new TrueDepth camera system that cuts down on the size of the notch on the front, and there are rumors of a 3D triple-lens rear camera system that uses a laser to calculate depth information for objects in the room, improving both photography and AR capabilities.

2020 will be the first year that Apple introduces 5G support in the iPhone, allowing the new devices to connect to 5G networks that are much faster than 4G LTE networks.

Of course, until the new devices are released, there's no confirmation that these new devices are set to be called the iPhone 12, 12 Pro, and 12 Pro Max, but it's the guess that makes the most sense at this time.

The 2020 iPhones will feature an overhauled design with a metal frame that's similar to the frame of the iPhone 4. Apple analyst Ming-Chi Kuo says that the new iPhones will use a more complex segmentation design, and new trenching and injection molding procedures.

The grooving and injection molding of the metal in the frame is said to reduce the negative impact of metal shielding on the high-frequency transmission efficiency of the internal antenna. Kuo believes Apple will use sapphire or tempered glass to protect the grooves in the frame. Slightly wider antenna lines are a possibility according to one rumor, though that has yet to be backed up by a reliable source.

Rumors suggest Apple will offer four iPhones in three different sizes, but the sizes are said to be changing in 2020.

Though Apple is expected to continue offering both higher-end (aka more expensive) iPhones and lower-end (more affordable) iPhones in 2020, all of the devices may come equipped with OLED displays this year, with Apple doing away with LCDs for its iPhone lineup.

Apple's use of OLED across the iPhone lineup will allow for "more flexible handset design." Apple is testing OLED displays from Chinese company BOE Display, which makes LCDs for Apple's iPads and MacBooks. Apple has been using Samsung OLED displays in recent OLED iPhones and is expected to continue doing so.

The new iPhones coming in 2020 are expected to adopt a Samsung technology called Y-OCTA, that allows touchscreen circuitry to be directly patterned on the OLED panel without the need for a separate layer, resulting in a thinner display and lower production costs, though it's not clear if this translates to a thinner body design.

Some of the iPhones coming in 2020 are also rumored to include touch-integrated displays supplied by LG, with LG also planning to switch to LTPO backplane technology in the second half of 2020, perhaps supplying more power efficient displays for some 2020 iPhones if the displays are ready in time.

Rumors from notable Samsung leaker "Ice Universe" on Twitter have suggested iPhones coming in 2020 could feature a switchable 60Hz/120Hz refresh rate. Apple already uses ProMotion technology in the iPad Pro, so it's not too farfetched to believe the technology could be extended to the iPhone in the future.

The iPad Pro models do, however, use LCD displays and not OLED displays like the flagship iPhone models.

Rumors suggest TSMC will manufacture the 5-nanometer chips Apple will use in its 2020 iPhone lineup. The 5-nanometer process will produce chips that are smaller, faster, and more battery efficient due to improved thermal management.

TSMC will begin producing A14 processors for the 2020 iPhones in the second quarter of the year.

The iPhones coming in 2020 could have some small gains in battery capacity as Apple suppliers are working on a custom battery protection module that's 50 percent smaller and thinner than the same component in previous iPhones. That could free up valuable space in the iPhone.

Apple made major changes to the rear camera system in the 2019 iPhone lineup with the new triple-lens setup of the iPhone 11 Pro and Pro Max, and 2020 may bring even more camera improvements.

A time-of-flight (ToF) camera system employs a laser to calculate the time that it takes for the laser to bounce off of objects in a room, using the data to create an accurate 3D image of the surrounding area. This allows for more accurate depth perception and better placement of virtual objects, and it will also result in photos better able to capture depth.

The camera is said to be able to scan areas up to 15 feet from the device. Apple's front-facing TrueDepth camera uses similar 3D technology but because it's infrared and not laser-powered, it only works at distances of 25 to 50 centimeters.

Sony could be Apple's supplier for the new system, and rumors suggest Apple has been in talks with Sony over sensor tests. Apple's manufacturing partners are also getting VCSEL (vertical-cavity surface-emitting lasers) components ready to use in the camera setup.

So far, rumors indicate the two higher-end iPhones coming in 2020 will use the new time-of-flight rear camera, so it may not be available in the lower-end iPhones that are going to have a lower price tag.

Apple analyst Ming-Chi Kuo believes that at least one new iPhone in 2020 will feature a smaller front camera lens for an improved screen to bezel ratio, ultimately resulting in a smaller notch at the front.

Barclays analysts believe the iPhone 12 will feature a "refreshed" TrueDepth camera system, though there are no details from Barclays on what might be improved.

An analyst from Credit Suisse has said that Apple will introduce at least one new iPhone with no notch or Face ID in 2020, relying instead on an under-display fingerprint sensor, though that technology may still be a few years off.

Apple supplier AMS has announced new camera sensor technology that allows the RBG light and the IR proximity sensor used for the front-facing TrueDepth camera system to be embedded under an OLED display. Apple could potentially be planning to introduce the new sensor tech in its 2020 iPhones, and this would allow Apple to create an iPhone with a smaller Face ID notch.

Though not echoed by other rumors, Taiwanese site Economic Daily News believes that at least one of the iPhones coming in 2020 will use an ultrasonic fingerprint sensor manufactured by Qualcomm.

Barclays analysts have also suggested 2020 iPhone models could use acoustic fingerprint technology, and Chinese site The Global Times has suggested Apple will release a notchless phone with an under-display fingerprint sensor aimed at the Chinese market.

Apple analyst Ming-Chi Kuo believes Apple is working on an iPhone with both Face ID and an on-display fingerprint sensor for launch in 2021 rather than 2020. Kuo's prediction is based on Apple's patents related to fingerprint on display technology and the continued use of the feature in Android smartphones.

A future iPhone will include both Face ID and an under-display fingerprint sensor, according to a 2019 report from Bloomberg. The technology could be introduced as soon as 2020, but may not be ready until 2021.

In 2020, Apple plans to transition back to Qualcomm modem chips instead of Intel chips, using Qualcomm's 5G technology in its iPhones. Qualcomm and Apple were previously embroiled in a bitter legal battle, but managed to settle their disagreements in April of 2019.

All of the iPhones expected in 2019 will use 5G technology, according to Apple analyst Ming-Chi Kuo. All four iPhones will feature Qualcomm's X55 5G modem chip.

The X55 chip offers 7Gb/s peak download speeds and 3Gb/s upload speeds, though these numbers are theoretical maximums and actual speeds will depend on carrier network. The chip is Qualcomm's first 5G chip that supports all major frequency bands, operation modes, and network deployments.

There are two kinds of 5G networks -- mmWave (faster and limited in range) and sub-6GHz (slower but wider spread) and there could be some differences in which countries support which specifications. mmWave 5G technology will likely be limited to major cities and dense urban areas because of its short range, while 5G networks in rural and suburban areas will use the slower sub-6GHz technology

Kuo believes iPhone models with mmWave and sub-6GHz support will be available in main markets like the U.S., UK, Australia, Canada, and Japan, while in some other countries, Apple may offer iPhones with just sub-6GHz connectivity. sub-6GHz could also be disabled in countries that do not offer 5G or have shallow 5G penetration.

5G technology is still in the early stages of rolling out, but by the time Apple releases its new iPhones, the major carriers in the United States will have laid the groundwork for connectivity in most areas. For more on 5G technology and what we can expect when Apple rolls out its 2020 devices, make sure to check out our 5G iPhone guide.

Apple and Qualcomm are working together to get Qualcomm's 5G technology into an iPhone as quickly as possible, with the two companies behind as their dispute was only settled in April 2019. Apple usually secures finalized modem hardware 18 months before the launch of a new iPhone.

Apple may be planning to use Qualcomm's modems but not Qualcomm's RF front-end components due to time constraints, which could potentially impact maximum wireless speeds, though we'll need to see how Apple's implementation plays out to know for sure.

Apple analyst Ming-Chi Kuo, who has a reliable track record for predicting Apple's plans, believes that Apple is on track to release both sub-6GHz and sub-6GHz-plus-mmWave iPhone models simultaneously during the second half of 2020, despite the rumor that suggested a possible staggered release. Development on iPhones with sub-6GHz and mmWave support progressing as scheduled, according to Kuo.

What's Coming in the Future

Apple designers are said to ultimately be aiming to remove most of the external ports and buttons on the iPhone for a clean, streamlined device. If wireless charging technology improves, Apple could potentially get rid of wired charging all together, and rumors indicate Apple will release an iPhone without a Lightning port in 2021.

According to Apple analyst Ming-Chi Kuo, the highest-end iPhone model coming in 2021 will offer a "completely wireless experience." Charging would, presumably, be done all wirelessly through Qi-based wireless charging accessories. Barclays analysts also believe that starting in 2021, Apple will remove the Lightning connector from at least one iPhone model.