The iPhone 12 and 12 Pro are set to be delivered to customers this Friday, but there are already a few out in the wild. Leaker DuanRui this morning shared a video featuring a short teardown of the new ‌iPhone 12‌, giving us a quick look at the internals. 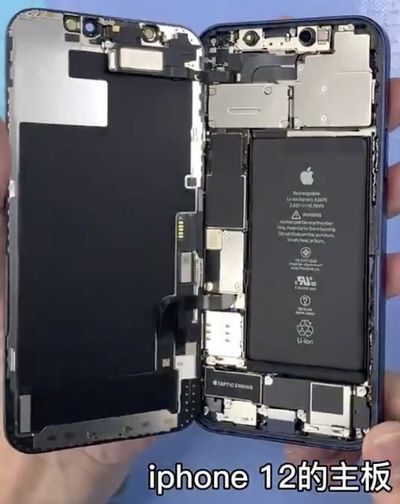 The logic board is longer than the logic board that was used in the ‌iPhone‌ 11, and it has the aforementioned L design rather than just a straight design.

There's a 2,815mAh battery in the ‌iPhone 12‌, which was seen in Brazilian regulatory filings last week. Comparatively, the ‌iPhone‌ 11 has a higher capacity 3,110mAh battery. Apple lists similar battery lengths for both ‌iPhone‌ models, though, due to efficiency improvements introduced through the A14.

Smaller batteries may have been included because Apple may have needed extra space for the 5G components in this year's iPhones, but there have already been some concerning early tests about faster than normal battery drain when using 5G networks. That's not necessarily a surprise because it's well known that 5G drains battery faster, but it's something ‌iPhone 12‌ and 12 Pro users should be aware of.

The Taptic Engine, which provides haptic feedback, is a good deal smaller in the ‌iPhone 12‌, and the teardown also shows off that magnetic ring that works with MagSafe accessories.

There are also comparisons between other components such as the display, dual-lens camera setup, flash, and more, which those interested can see in the video.

iFixit will have in-depth teardowns of both the iPhone 12 and 12 Pro coming in the future, which we can count on seeing after the new devices are released.

MrGuder
I know people will disagree but those magnet rings cause weight in these new phones. I personally feel MagSafe on the iPhones is a gimmick and not a must have feature. I’d prefer no magnets and allow more room for a larger battery. Every yr Apple adds a new feature that forces them to decrease the battery size. force Touch ID tapic bar, magnets, 5 G antenna etc...
Score: 23 Votes (Like | Disagree)

Any confirmation on the refresh rate of the screen?

If it was over 60hz the Apple event would have been 15 minutes longer..
Score: 11 Votes (Like | Disagree)

X60 design isn't even final and Qualcomm is still shipping samples. X60 in iPhone 12 was never a possibility.
Score: 10 Votes (Like | Disagree)

TheYayAreaLiving ?
The iPhone didn't deserve that this early.
Score: 8 Votes (Like | Disagree)

Andddddd yet another reason to wait for next year's iPhone (which I already figured anyways).

The X60 (the newest Qualcomm chip following the X55) is a big update with lower battery consumption, Voice over 5G (VoNR), and carrier aggregation which will result in faster and more reliable 5G.
Score: 8 Votes (Like | Disagree)
Read All Comments