All iPhone 12 and iPhone 12 Pro models purportedly have a hidden reverse wireless charging feature, according to an FCC filing. The feature has not yet been activated, but could yet be unlocked for an upcoming Apple accessory. 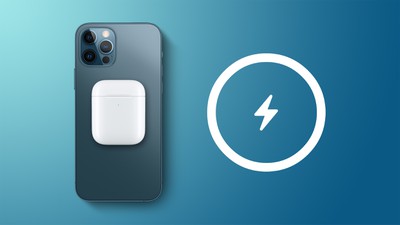 In addition to being able to be charged by a desktop WPT charger (puck), 2020 iPhones also support WPT charging function at 360 kHz to charge accessories. Currently the only accessory that can be charged by iPhones is an external potential Apple accessory in future.

It does not seem unfeasible that Apple could enable the feature via a software update in the future to accompany the launch of a new accessory. It is notable that the filing refers to a single, unreleased Apple accessory that would take advantage of reverse wireless charging, which has led to speculation on what the accessory could be.

Bloomberg's Mark Gurman hypothesized that it could be next-generation AirPods with MagSafe support. MagSafe would allow the ‌AirPods‌ case to magnetically attach and charge on the back of ‌iPhone 12‌ models. Another possibility is Apple's long-awaited AirTags item trackers, which could also benefit from wireless charging on the back of an ‌iPhone 12‌.

This is not the first time that Apple has been believed to be interested in reverse wireless charging on the iPhone. Two-way charging was a rumored feature for the iPhone 11 lineup in 2019, but Apple analyst Ming-Chi Kuo later said the feature may have been abandoned because the charging efficiency did not meet Apple's requirements.

With the launch of MagSafe on the ‌iPhone 12‌, and third-generation AirPods expected in the first half of this year, ‌iPhone 12‌ users could yet see a new feature added to their existing device.

Tuesday February 16, 2021 8:00 am PST by Joe Rossignol
Accessory maker Hyper today announced the release of the HyperJuice Magnetic Wireless Charging Stand, a MagSafe-compatible mount for charging any iPhone 12 model and AirPods in a wireless charging case simultaneously. While the mount is compatible with the MagSafe system, it is not an official MagSafe accessory, so iPhone 12 charging speeds are limited to up to 7.5W like other wireless Qi...
Read Full Article • 39 comments

Thursday April 15, 2021 9:39 am PDT by Juli Clover
Anker, a company known for its range of accessories designed for Apple products, recently came out with one of the first MagSafe-compatible battery packs, so we thought we'd check it out to see how it compares to a standard battery pack. Subscribe to the MacRumors YouTube channel for more videos. Design wise, Anker's power bank looks like a typical battery pack, but it has magnets built in...
Read Full Article • 42 comments

Useful iPhone Accessories Worth Checking Out

Monday March 22, 2021 8:01 am PDT by Juli Clover
MacRumors videographer Dan is regularly trying out new accessories for the iPhone, and in the latest MacRumors YouTube video, Dan highlights some of the latest iPhone accessories he’s been testing, many of which focus on iPhone photography and videography. There's a high-end microphone option, a new flash drive from SanDisk, mounts from Moment, and more. Subscribe to the MacRumors YouTube ...
Read Full Article • 17 comments

Tuesday January 5, 2021 8:27 am PST by Hartley Charlton
Apple is researching the integration of multiple inductive charging coils into MacBooks and iPads to use them as wireless chargers for other devices, according to a patent filed by Apple. The patent, spotted by Patently Apple, is titled "Inductive charging between electronic devices" and was awarded by the U.S. Patent and Trademark Office. Apple has been researching device-to-device...
Read Full Article • 105 comments