Apple's iPhone 12 lineup is expected to come in eight different colors, overhauling the iPhone color options to prospective customers. The colors come to accompany the iPhone 12's new squared-off industrial design, with a flat stainless steel band around the outer edge, at least on the Pro models, and glass on the rear. 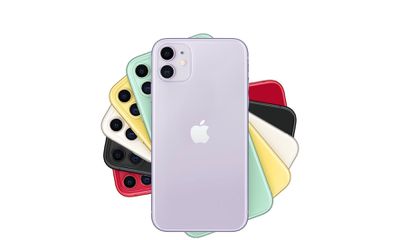 Colors that would be removed from the iPhone lineup include Yellow and Purple. Multiple rumors have previously suggested that the 6.1-inch iPhone 12 Pro and 6.7-inch iPhone 12 Pro Max will also come in a new Blue finish, which will replace the Midnight Green color that was introduced as an option for the iPhone 11 Pro.

New Blue shade introduced in September
The blue will likely be the same shade as the new striking shade of blue Apple Watch Series 6, which Apple introduced as a new Apple Watch color in September. This has also been corroborated by "Kang," who said that the iPhone 12 Pro models will come in Blue as well as Gold, Silver, and Graphite.

The iPhone 12 is expected to launch on Tuesday, October 13th during Apple's media event. See our full article on what Apple will be announcing.

Thursday December 23, 2021 7:45 am PST by Hartley Charlton
While Apple's color options have been a source of considerable discussion in recent years, complaints about the company's color offerings started to gain traction following the launch of the iPhone 13 and the aluminum Apple Watch Series 7, which are not available in Space Gray or Silver. With 2021 drawing to a close, we have examined Apple's entire selection of colors across its devices to take a ...
Read Full Article

Wednesday March 9, 2022 11:46 pm PST by Sami Fathi
A new video posted to Twitter has offered a first hands-on look at Apple's new green iPhone 13 and the Alpine Green iPhone 13 Pro color options announced earlier this week. Following a tradition it started in 2021, Apple this week introduced new iPhone colors for the spring. The company unveiled only a new purple color for the iPhone 12 last year, but this year introduced two colors for the...
Read Full Article • 93 comments

Monday September 27, 2021 1:08 am PDT by Hartley Charlton
Sierra Blue is Apple's new color with the iPhone 13 Pro and iPhone 13 Pro Max, and it has now emerged that the Sierra Blue iPhone 13 Pro differs from all other iPhone models in a way that may not be immediately obvious. Sierra Blue is the first "Pro" iPhone color option to use a lighter shade that is still saturated with color. Previous models have offered Midnight Green and Pacific Blue,...
Read Full Article