Tips for Getting Siri to Play Tracks in Apple Music

If you are signed up for the free, three-month trial of Apple Music, you probably know by now many of the cool features the streaming music service has to offer. But, did you know that Siri can make the experience even better? We've got a few tips for getting Siri to act as your digital deejay. 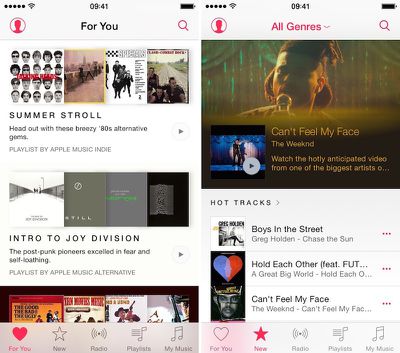 To get the full use of Siri's compatibility with Apple Music, make sure you are subscribed and your iCloud Music Library is on.

Play a Radio Station or Beats 1

Not only can Siri play a radio station like Electronic or Oldies, but now the personal assistant can also start playing live Beats 1 programming. Just ask her to "Play Beats 1."

One of the things I love about Apple Music is the playlist feature in the For You section. If I've recently "liked" a particular song, A new playlist based on that will show up. If you know the name of an Apple Music created playlist, ask for it specifically. For example, "Play Souxie & The Banshees: Deep Cuts."

What Song is Playing

If Apple Music is playing a song you don't recognize, you can ask for more information. Just say, "What song is this?" to discover the artist and song title.

Add an Album to Your Playlist

If you like the song that is playing and want to hear the whole album, ask Siri to add the album to your playlist and it will begin playing after the current track is finished.

Sometimes, you just don't know what you want to hear. Ask Siri to "play new music" and Apple's latest top songs will begin playing. Sometimes, that is the best way to discover your new favorite band.

When asking Siri to play a specific song, there may be a number of different versions. She will choose the original first. However, if you want to hear the version covered by a different band, be sure to include that in your request.

Play a Band's Album Based on Chronology

Play the Hits From a Specific Date

Have you ever wondered what song was number one the day you were born? Ask Siri. If the song is in Apple Music, you can hear it, too. You can also play the top 10, 25, or 50 songs from a certain month or year.

While listening to a specific song, does it sometimes make you want to listen to another one? Ask Siri to play something after the current song is over and it will be queued to your Up Next list.

Another great feature of Apple Music is that you can add songs and albums to your music library, and even download them for offline listening. Just ask Siri to add a song, album, or even playlist to your music and it will be there waiting for you.

When you are browsing music and finally find a song that hits you just right, you can ask Siri to play more like it and Apple Music will create a Genius playlist based on your request.

Play a Different Song or Album

You don't have to wait for a song to end in order to get into a new groove. When you ask Siri to play a new album, she will let you know that it will clear your Up Next queue. Confirm that you are into something different now to hear the new tracks.

Of course, it works both ways. If you don't like a song, tell Siri and it will be added to your activity. Plus, you'll have the added benefit of not having to hear it anymore. Apple Music will play the next song instead.

If you don't want to hear a particular song, but don't want it to go into the Pit of Dislike, just ask Siri to skip it and the next song will play instead.

nortofthe13th
This is where it gets awesome! The Siri integration is wicked!
(I know some people have had a rough experience with Music, and Siri for that matter... But I'm hooked!)
Score: 2 Votes (Like | Disagree)

darcyf
Any use of Siri while a song is actually playing interrupts the playback. What's the good of that?
Score: 2 Votes (Like | Disagree)

NavySEAL6
There was definitely some good tips in here.

My current biggest annoyance is that when I add a playlist to my music, and I already have some of those songs, I end up with doubles inside of those albums.

Anyone having a similar issue or have a remedy?
Score: 1 Votes (Like | Disagree)

Any use of Siri while a song is actually playing interrupts the playback. What's the good of that?

If you use Siri on the Apple Watch, it doesn't interrupt playback at all, and is pretty frickin awesome. You don't even have to touch a button! Just look at your wrist, say "hey Siri, play some Daft Punk" and away it goes.

You can't add tracks to Up Next yet on the Watch, but that'll be there in a month or two with the next OS version, if I remember correctly. Controlling music by talking to my watch is my favorite thing about the Apple Watch so far.
Score: 1 Votes (Like | Disagree)

Analog Kid
I don't want to subscribe to Apple Music, but I would still like Siri to play a song from my library when asked. Any hints?

All I get now is an error message...
Score: 1 Votes (Like | Disagree)
Read All Comments