How to Activate Siri With Your Powerbeats Pro Earbuds

Apple announced Beats-branded Powerbeats Pro wireless earbuds in April 2019, adding a number of new features that set them apart from its wired fitness-oriented Powerbeats 3 earbuds. One of those features is the ability to summon Siri entirely handsfree, allowing you to speak a variety of commands and ask questions. 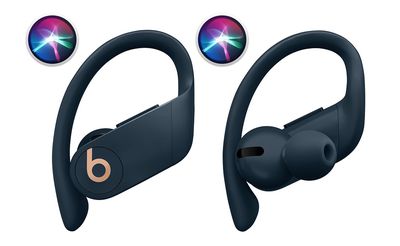 Like with Apple's second-generation AirPods, all you have to do is say "Hey ‌Siri‌" when you're wearing your ‌Powerbeats Pro‌ buds and the digital assistant will be ready to respond to the words that follow.

If you prefer not to have to say "Hey ‌Siri‌", you can trigger the assistant be pressing the Play/Pause button on the ‌Powerbeats Pro‌ buds for three seconds. That said, you should find the immediacy of using the "Hey ‌Siri‌" invocation a lot more convenient if you're in the middle of a workout.

‌Siri‌ can be used with ‌Powerbeats Pro‌ to control music, ask queries, make phone calls, and check the status of your earbuds. At the bottom of this article is a quick list of commands to get you started.

Note that these commands won't do anything if your iOS device doesn't have a network connection. It's an odd requirement, but unlike Voice Control, ‌Siri‌ needs an internet connection even for basic playback commands.