This week saw an interesting mix of news and rumors, led by a new report from Ming-Chi Kuo outlining some of his expectations for the 2022 iPhone models. 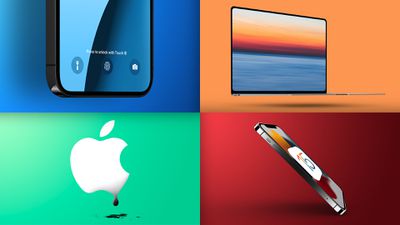 We also saw the second betas of iOS 15 and iPadOS 15, a claim that Apple has already stopped production of the iPhone 12 mini amid slow sales, and a report that Apple is clamping down on some prominent leakers, so read on for details on all of these stories and more!

Apple may include an under-screen version of Touch ID on some "iPhone 14" models in 2022, according to credible Apple analyst Ming-Chi Kuo, providing users with an alternative to Face ID.

In a wide-ranging research note this week, Kuo added that a new iPhone SE will be released in the first half of 2022 with 5G support and other new features, while remaining a budget-friendly device. Kuo also expects a 48-megapixel camera on some high-end iPhones next year.

As for this year, iPhone 13 dummy models surfaced this week, offering a closer look at rumored design changes.

Apple is working on a completely new, high-end version of the MacBook Air for release as early as later this year, according to recent reports.

The new MacBook Air would likely feature a faster iteration of Apple's custom M1 chip for ultra-fast performance in a lightweight design. The current base model MacBook Air with the M1 chip already outperforms a maxed-out Intel-based 16-inch MacBook Pro in benchmarks.

Apple Seeds Second Betas of iOS and iPadOS 15 to Developers

Two and a half weeks after releasing the first betas of iOS 15 and iPadOS 15 following the WWDC keynote, Apple this week seeded the second beta versions to developers. Parallel beta updates for watchOS 8 and tvOS 15 were also released, but we've yet to see a second beta of macOS Monterey.

The second betas of iOS and iPadOS 15 fix a number of bugs, and also introduce a few new features that weren't in the first betas, including initial support for SharePlay functionality in FaceTime and the ability for apps to request access to additional RAM to improve performance.

Check out our tidbits article for more on the changes in the second beta releases, and if you're not a registered Apple developer but you want to try out the upcoming operating system versions ahead of their official launch in the fall, Apple should be releasing the initial public beta versions shortly.

A credible Apple leaker known as "Kang" and a number of other leakers reportedly received warning letters from lawyers representing Apple this week.

"Kang" has been one of the most reliable Apple leakers over the last few years, with several detailed leaks about Apple's future product and software plans that turned out to be correct, and Apple's letter essentially suggests that continued leaks of this nature may result in legal action.

With iOS 15 and macOS Monterey, Apple is adding several quality of life improvements, which are designed to address some of the complaints that people have had with these operating systems for years now.

On our YouTube channel, we recently shared a video highlighting some of our favorite "fixes" that address long-running problems in iOS and macOS, as well as features that bring significant improvements to usability of the platforms.

According to TrendForce, the iPhone 12 mini "reached End-of-Life ahead of time," suggesting that Apple and resellers will focus on selling through existing inventory of the device without manufacturing any further units.

For some situations it’s superior to faceid. I’m happy to have both.
Score: 18 Votes (Like | Disagree)

I am, I vastly prefer an active needed physical action to a face scan from a device I'm already looking at. It's been a large part of my decision to continue to use my iphone 8, and a more minor reason for why I preferred my iPad Air to the Pro. And that's not even getting into the problem of masks, COV19 isnt gone, we're going to need facemasks at least situationally for a while to come, and really we should be using them for things like the flu too. I also often wear masks for some volunteering I do, a lot of folks in the medical industry, chemical industry, etc etc who have to wear masks even when their hands are clean and not covered in a glove I'm not the only one.
Score: 13 Votes (Like | Disagree)

it just shows that the small phone crew weren’t REALLY about a small phone….they just couldn’t afford a new phone.
The cheapest phone now is the SE ……and it’s selling….go figure ??

It is a split market. Some like me want the best "small" iPhone I can get. When I'm out and about I don't want or need to lug around a large phone and when I'm home I use my iPad more. So I purchased the 2020 SE and then the 12 mini. Price isn't a concern. Others yeah price is a concern and the $100 savings over the regular 12 or even the same for the year old 11 wasn't enough of an incentive if they actually like or didn't mind the larger size.

Saying that "they just couldn't afford a new phone" is just as silly as saying people get larger iPhones because they can't afford an iPhone AND an iPad! ;)
Score: 8 Votes (Like | Disagree)

The iPhone SE was the #2 best-selling smartphone of the year - of all brands and makers. Only the iPhone 11 sold more units.

Looking at the average selling price, the 12 mini brought in more revenue than the SE even though it sold fewer units and it did so in less than half the time.
Score: 6 Votes (Like | Disagree)

Me. I prefer it much more over faceID.
Score: 6 Votes (Like | Disagree)
Read All Comments