While Apple has launched its new iPhone lineups annually in September for many years now, the timing is a little different in 2020 thanks to development and production delays due to the global health crisis. 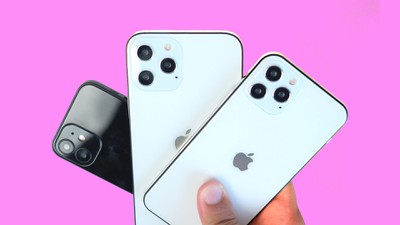 Apple did hold a September event in 2020, but it involved Apple Watch and iPad announcements rather than addressing the ‌iPhone‌. With Apple now ready to introduce the iPhone 12, the company has scheduled a media event for Tuesday, October 13 at 10:00 a.m. Pacific Time.

When will the iPhone 12 be available for pre-order?

Even though Apple's media event will be held on October 13, the ‌iPhone 12‌ won't be immediately available for purchase. What we initially heard from carrier sources is that pre-orders will begin on Friday, October 16, with an actual launch following one week later on Friday, October 23.

But it's more complicated than that. These are when the most recent rumors have indicated:

Will all iPhone 12 models launch simultaneously?

It appears not. With Apple releasing four different ‌iPhone 12‌ models, rumors indicate there will be a staggered launch. The rumors have differed on which models will launch first, but the most likely scenario seems to be described above. The 6.1" ‌iPhone 12‌ and 6.1" ‌iPhone 12 Pro‌ to launch on October 23rd, while the ‌iPhone 12‌ Mini and ‌iPhone 12 Pro Max‌ get staggered releases in November.

What will be the differences between the various iPhone 12 models?

For a full rundown on the upcoming ‌iPhone 12‌ lineup, check out our comprehensive roundup outlining everything we know about the new phones. Briefly, we expect all four models to have similar, refreshed designs reminiscent of the iPad Pro, as well as OLED displays across the board.

All ‌iPhone 12‌ models are expected to include support for faster 5G cellular networks, although only the more expensive Pro models are rumored to include support for the fastest mmWave 5G networks that are starting to roll out in dense urban environments. All four ‌iPhone 12‌ models should support sub-6GHz 5G networks, which offer much broader coverage at slower speeds than mmWave 5G, although still faster than the current LTE speeds.

We'll learn all of the details about the ‌iPhone 12‌ lineup on Tuesday, October 13, so stay tuned to MacRumors, as we'll have wall-to-wall coverage during and after the event. Also make sure to check our out overview post highlighting how to watch the event live and when it will be happening in your local time zone.

iPhone 12 and iPhone 12 Pro Launch in More Countries, Including India and Korea [Updated]

Thursday October 29, 2020 1:06 pm PDT by Joe Rossignol
iPhone 12 and iPhone 12 Pro are now available in additional countries and regions, including India and South Korea, where the calendar has already turned to October 30 launch day. The devices can be purchased from select retailers, including the Apple Store in South Korea, while online orders are set to begin arriving to customers. iPhone 12 and iPhone 12 Pro launch day in Singapore last week ...
Read Full Article • 4 comments

Wednesday October 14, 2020 9:47 am PDT by Joe Rossignol
iPhone 12 Pro and iPhone 12 Pro Max models are equipped with 6GB of RAM, while the lower-end iPhone 12 and iPhone 12 mini models have 4GB of RAM, according to plist files in the Xcode 12.1 beta viewed by MacRumors. These plist files have accurately revealed the amount of RAM in several generations of iPhones, and for good measure, a seemingly legitimate Geekbench result for the iPhone 12 Pro ...
Read Full Article • 211 comments

Friday October 16, 2020 5:00 am PDT by Juli Clover
Apple has started accepting pre-orders for the new iPhone 12 and iPhone 12 Pro models through its online storefront and the Apple Store app. Pre-orders are available in more than 30 countries and regions around the world for the two models that are on sale today. Note that if you want an iPhone 12 mini or an iPhone 12 Pro Max, you'll need to wait until November 6 to pre-order. Priced...
Read Full Article • 386 comments

iPhone 12: Ten Things to Know About the Next iPhone

Friday October 2, 2020 2:55 am PDT by Hartley Charlton
With the upcoming iPhone 12 lineup expected to arrive this month, and after months of leaks and rumors, what exactly do we know about Apple's upcoming smartphone? Turns out, a lot. These are the most important features you should know about Apple's next iPhone. 1. New Design Rumors have suggested that the 2020 iPhones will feature an overhauled design similar to that of the iPhone 4, with a ...
Read Full Article

Wednesday September 23, 2020 11:51 am PDT by Juli Clover
Apple's upcoming iPhone-centric event could perhaps be held on Tuesday, October 13, according to information shared with MacRumors by an employee at a UK cellular carrier. There's no way for us to confirm the dates at this point in time nor are we sure on the credibility of the source, but even without a rumor, Tuesday, October 13 is a good guess based on Apple's historic launch timelines, ...
Read Full Article • 138 comments