Now that WWDC week is winding down, it's good to take a step back and look at all of the biggest announcements and smaller details, as Apple had an awful lot to say about its operating systems, the direction of future Mac hardware, and more.

Subscribe to the MacRumors YouTube channel for more videos.
While we didn't get any new hardware launches, Apple certainly made an impact with its software news, including some significant changes for iOS 14 with Home screen widgets and tons of new features, an updated look for the Mac with macOS Big Sur, and much more. And of course, Apple's long-rumored transition of its Mac lineup to the company's own Arm-based chips is finally upon us, with Apple starting to lay out its move to Apple Silicon with tools for developers to help them get ready.

Check out our video above and read on below for more on this week's biggest stories!

Everything Apple Announced at WWDC20 in 13 Minutes

Apple this week held its first-ever virtual WWDC keynote that was jam-packed with a wide variety of announcements, including iOS 14, macOS Big Sur, watchOS 7, tvOS 14, and confirmation of its long-rumored plans to transition to Arm-based Macs starting later this year. 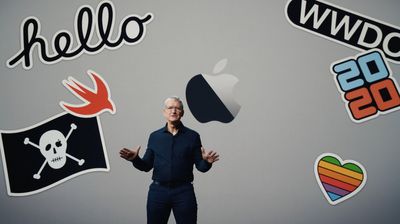 For those that didn't have a chance to watch the nearly two-hour keynote, we condensed everything that Apple announced into a 13-minute video, providing a quick recap of everything notable.

Be sure to read our WWDC20 roundup for detailed coverage of all of Apple's announcements throughout the event.

Apple this week took the wraps off of iOS 14 with dozens of new features, including customizable home screen widgets, the App Library, App Clips, pinned conversations and mentions in iMessage, a new Translate app, digital car keys in the Wallet app, picture-in-picture mode for videos and FaceTime calls, the ability to set third-party browser and email apps as default, and more.

Incoming phone calls no longer take up the full screen on iOS 14, nor does Siri, as Apple has made both interfaces more compact. For a closer look at these changes, be sure to watch our video of iOS 14 in action.

iOS 14 is currently available in beta for registered Apple developers, with a public beta to follow next month. The software update will be released to all users with an iPhone 6s or newer in the fall. As always, it is best to install beta software on a secondary device if possible due to potential bugs.

Many of iOS 14's features are also baked into iPadOS 14, plus a few extras like handwriting in any text field with the Apple Pencil.

Apple this week previewed macOS Big Sur with redesigned elements like the Dock and Notification Center, the addition of a Control Center, several improvements to core apps like Safari and Messages, battery usage history, the return of the startup chime, and more.

The update is significant enough that Apple decided to brand it as macOS version 11.0, marking the end of an era for Apple's desktop platform. For nearly two decades, every major release of macOS (known as OS X until 2016) was an increment of version 10, from 10.0 "Cheetah" in 2001 through 10.15 "Catalina" in 2019.

For a closer look at macOS Big Sur's new design and features, be sure to watch our video walkthrough.

macOS Big Sur is available in beta for registered Apple developers, with a public beta to follow next month. The free software update will be released to all users with a compatible Mac in the fall.

Following years of rumors, Apple has confirmed its plans to switch to custom processors for Macs, promising industry-leading performance per watt. Apple said that it plans to ship the first Mac with its own silicon by the end of the year and complete the transition to Arm-based architecture in about two years.

The first Mac with Apple silicon could be a redesigned 24-inch iMac in the fourth quarter of 2020, according to analyst Ming-Chi Kuo. Apple said that it will continue to support and release new versions of macOS for Intel-based Macs for years to come, and it also confirmed that it still has some new Intel-based Macs in development.

Developers can apply for a modified Mac mini with the iPad Pro's A12Z chip to test and develop apps on a Mac with Arm-based architecture. The program costs $500 and includes a comprehensive set of resources and one-on-one technical support. Apple says availability is limited.

Given the shared Arm architecture, most iPhone and iPad apps will be able to run as-is on Macs with custom Apple silicon. Check out our guide to Apple's transition to Apple Silicon for more details on all aspects of the plan.

Apple Watch will be getting several new features with watchOS 7 this year, including more customizable watch faces, sleep tracking, four new workout types that can be tracked, a handwashing coach with a 20-second countdown, and more.

watchOS 7 is available in beta for registered Apple developers, and for the first time, a public beta will be available next month. The software update will be released to all users with an Apple Watch Series 3 or later in the fall.

Apple also previewed tvOS 14 with the ability to watch YouTube videos in 4K on the Apple TV 4K, Audio Sharing for AirPods, and more.

iPhone 12 Rumor: No EarPods in Box and Possibly Not Even a Charger

Based on discussions with several Apple suppliers, Barclays analysts believe that iPhone 12 models will not come with EarPods in the box, in line with a prediction shared by Ming-Chi Kuo last month.

Oddly enough, the analysts also heard that iPhone 12 models might not ship with a power adapter of any kind, leaving only a USB-C to Lightning cable in the box. If true, Apple would likely position the move as good for the environment, but it would certainly be inconvenient for customers without a spare charger.

Earlier this week, the anonymous Twitter user Mr. White shared photos of a 20W power adapter that he suggested will be included with iPhone 12 models, so there are some conflicting rumors about this right now.

On a separate note, prominent mobile leaker Ice Universe claimed that the iPhone 12 Pro and iPhone 12 Pro Max models will include displays with 120Hz refresh rates, allowing for a smoother visual experience. We've previously heard mixed rumors about whether the feature, known as ProMotion on its iPad Pro models, so we're still uncertain which, if any, iPhone 12 models may adopt it later this year.

Still waiting for a faster 2.0 Lightning cable, current usb c or usb 2 both peak at less than 40 Mb / sec on the computer. Time to take Lightning to the next level.

Can somebody explain how a 120Hz refresh rate on a phone screen is beneficial to the average user?

This is how you'll feel when experiencing 120Hz.
Score: 4 Votes (Like | Disagree)

GeoStructural
I am so happy with everything iOS 14 brought. By the way, if you were wondering, I have it installed and it is very stable.

It has been a while since a first beta was this stable, iOS 13 beta 5 was still crashing just for copying and pasting something last year.
Score: 3 Votes (Like | Disagree)

Or just throw It to the bin and move to usb C! :D

jimbobb24
No charger? How cheap is apple getting?
Score: 2 Votes (Like | Disagree)
Read All Comments