Apple Seeds First Betas of iOS and iPadOS 14 to Developers

Following the conclusion of today's keynote event that saw the unveiling of new versions of iOS, iPadOS, macOS, watchOS, and tvOS, Apple has made the first betas of iOS and iPadOS 14 available to developers for testing purposes. 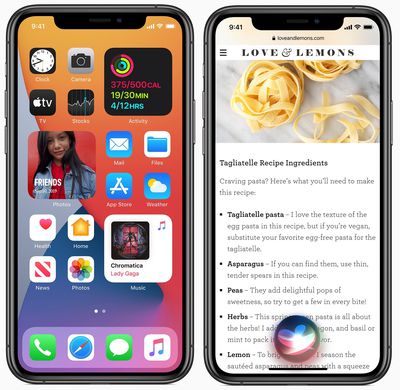 Over the course of the iOS/iPadOS 14 beta testing period, Apple will be able to refine new features and work out bugs ahead of the software's release, which is expected in the fall. The early June release will also allow developers to build new iOS and iPadOS 14 features into their apps.

Registered developers can download the profile for the first iOS and iPadOS betas from the Apple Developer Center, and after that, betas will be available over the air.

As with all of the updates introduced at WWDC, iOS and iPadOS bring major new features to the iPhone and the iPad, with updates to Messages, Safari, and the Home screen, plus a new Fitness app and AR capabilities. iOS 14 includes a redesigned Home screen experience with an App Library view that allows you to see all of your apps at once and support for widgets on the Home screen for the first time.

A widget Smart Stack can be set up, which uses on-device intelligence to surface the right widget base don time, location, and activity. FaceTime and Phone calls no longer take over the entire ‌iPhone‌ or ‌iPad‌ display, an update that iOS users have wanted for years.

A new feature called App Clips is designed to allow users to scan an App Clip code, QR code, or NFC tag to get a quick clip of an app that can be used without the need to download the entire app. App Clips also work from Messages or Safari.

App privacy has been enhanced and all apps need to require user permission before tracking. All App Store product pages will also feature summaries of developers' privacy practices in an easy-to-understand format. Users can also choose to share approximate location information with apps, and users can also upgrade existing accounts to Sign in With Apple.

For Safari, there's a new built-in translation feature, Siri is smarter than ever and can send audio messages, the Home app has new Adaptive Lightning features, and CarKey, a new feature that will let you unlock your car with your ‌iPhone‌, is coming. Switching between devices with AirPods is more seamless, and for AirPods Pro, there's an incredible new spatial audio feature with dynamic head tracking.

iPadOS 14 includes all of the features in iOS 14 plus a new "Scribble" feature that lets users handwrite in any text field on the ‌iPad‌, with the handwritten text automatically converted to typed text.

Many apps in iPadOS 14 feature sidebars and toolbars with consolidated controls for a more streamlined user experience, and there's a new Depth API that lets developers create more powerful features for their apps.

Search on the ‌iPad‌ has been entirely redesigned and is now similar to Finder for Mac, a one-stop place to find anything. You can launch apps, access contacts, access files, and more.

Only registered developers can download the iOS and iPadOS 14 betas at this time. Apple will provide a public beta for public beta testers later in the summer after the software has gone through a couple of rounds of developer testing. Beta testing for iOS 14 will last for several months, with the update set to be released in September 2020.

But Apple invented them, right?

Honestly this is so lame. When in the presentation did anyone say anything about inventing any of the things in your list. These are features that iOS users have been asking for years to be brought to iOS. Yes android has had them for years, but no one said anything about look at this cool new thing we invented that hasn't been seen on any other platform before.
Score: 14 Votes (Like | Disagree)

Gamer9430
If the dev center would load, that would be great!
Score: 6 Votes (Like | Disagree)

Ds6778
This is the most excited I’ve been for iOS in a while. It’s very clean and simple without feeling overwhelming. You can make your home screens work how you want them too. I am beyond stoked for the iPhone 12. The animations are silky smooth and very thought out..imagine how a high refresh rate will make the iPhone experience even better. I can’t get over how much functionality they have added. They absolutely nailed this update.
Score: 5 Votes (Like | Disagree)

iamkilo
Installed on my iPad and iPhone and at first glance things seem pretty stable and snappy. Outlook, Teams, iMessage, Apollo, and Telegram all work and that’s 99% of my utilization. Safari is working great as well.
Score: 5 Votes (Like | Disagree)